Named 2017 YZ4, the asteroid was only spotted on Christmas Day, which means very little could have been done to protect Earth if it were to hit.

The asteroid passed between the Earth and moon at a distance of just 139,433 miles (224,000 km) – close enough to be considered a ‘near miss’ by astronomers. 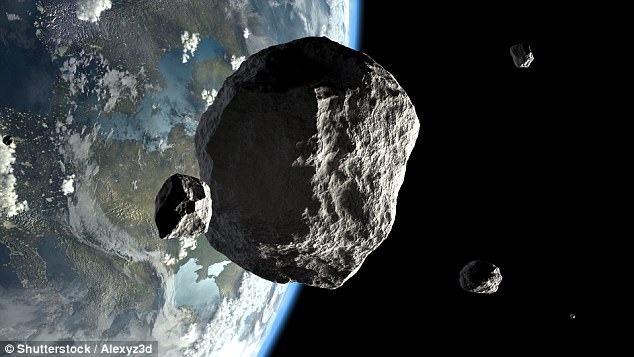 The asteroid was first spotted at Mount Lemmon Survey Observatory in Arizona and will be the 52nd to pass between Earth and the moon this year.

Currently, Nasa would not be able to deflect an asteroid if it were heading for Earth but it could mitigate the impact and take measures that would protect lives and property.

This would include evaluating the impact area and moving key infrastructure.

Finding out about the orbit trajectory, size, shape, mass, composition, and rotational dynamics would help experts determine the severity of a potential impact.

However, the key to mitigating damage is to find any potential threat as early as possible.

‘This is the first known asteroid to flyby Earth within one lunar distance since two such asteroids flew past us 35 minutes apart on November 21, and the 52nd this year’, a Nasa spokesperson told the Express.

Anything that flies closer than six million miles of our planet is a near-earth asteroid and could cause severe damage were it ever to crash into Earth.

Deflecting an asteroid that is on an impact course with Earth requires changing the velocity of the object by less than an inch per second years in advance of the predicted impact. 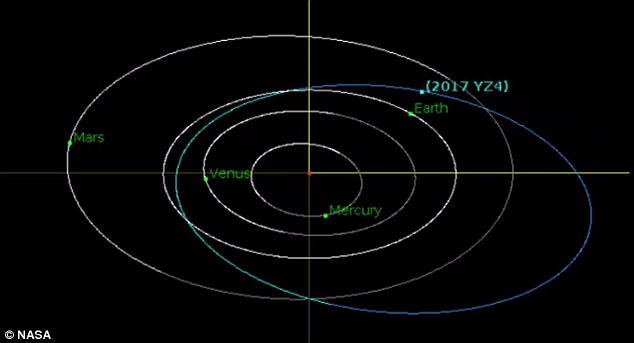 Named 2017 YZ4, the asteroid was only spotted on Christmas Day and will pass between the Earth and moon at a distance of just 139,433 miles (224,000km) – close enough to be considered a near miss by astronomers

Nasa is currently moving forward with a refrigerator-sized spacecraft capable of preventing asteroids from colliding with Earth. A test with a small, non-threatening asteroid is planned for 2024.

This is the first-ever mission to demonstrate an asteroid deflection technique for planetary defense.

The Double Asteroid Redirection Test (DART) would use what is known as a kinetic impactor technique—striking the asteroid to shift its orbit.

The impact would change the speed of a threatening asteroid by a small fraction of its total velocity, but by doing so well before the predicted impact, this small nudge will add up over time to a big shift of the asteroid’s path away from Earth.

In February 2013 a 19-meter meter (62-feet) meteor exploded in the skies above Chelyabinsk in Russia.

Earlier this month a massive asteroid called 3200 Phaethon made its closest approach to Earth at around 6.4 million miles (10.3 million kilometers) away.

The new observations conducted from December 15-19 show Phaethon to be about 3.6 miles (six kilometers) wide.

This means it’s larger than previously thought, by about 0.6 miles (one kilometer). 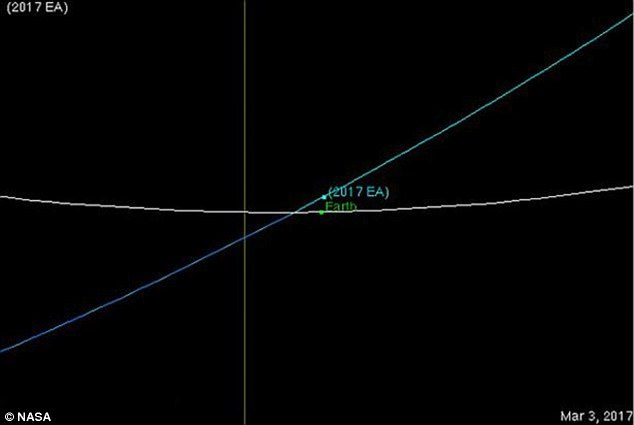 It passed by Earth this month at about 27 times the distance between our planet and the moon.

Before its approach, NASA revealed asteroid 3200 Phaethon is classed as ‘potentially hazardous.’

The latest approach is the closest the asteroid has been to Earth since December 16, 1974, when it was around 5 million miles away – although we were blissfully unaware at the time.

In a statement about the asteroid, which was first discovered in 1983, a spokesperson for Nasa said: ‘With a diameter of about 5km, Phaethon is the third largest near-Earth asteroid classified as ‘Potentially Hazardous’.’

The next pass is predicted to be in 2093 when it is expected to pass at just over 1.8 million miles (2.9 million kilometers) away.