Wedding “first looks” usually involve the couple about to get married.

Often, it’s when the future husband sees the wife-to-be in her wedding dress for the very first time — and they almost always end in tears.

But as this story shows, sometimes the most touching “first looks” are a little out of the box.

When Jordyn got married, her special “first look” wasn’t with her husband-to-be — it was with her grandma, who had no idea that Jordyn was about to surprise her with a very special wedding dress.

Instead of buying a new dress, Jordyn wore the gown her grandmother had used in her own ceremony back in 1962. Grandma, who is now widowed, received the surprise of a lifetime.

Keep scrolling to see the stunning first look, and for exclusive comments from Jordyn’s wedding photographer, Kortney, who helped set up the special surprise. 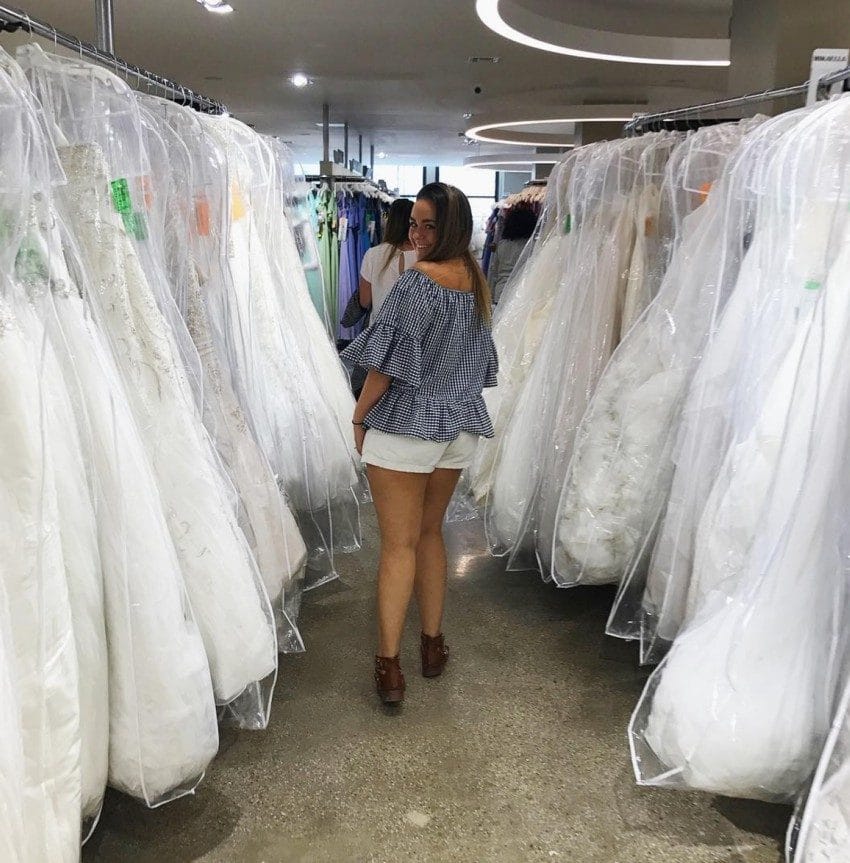 For lots of brides, choosing a wedding dress can be a stressful event. It can take months to find and fit the perfect gown.

But for one bride named Jordyn, the perfect dress wasn’t in a store: It was an old family heirloom. 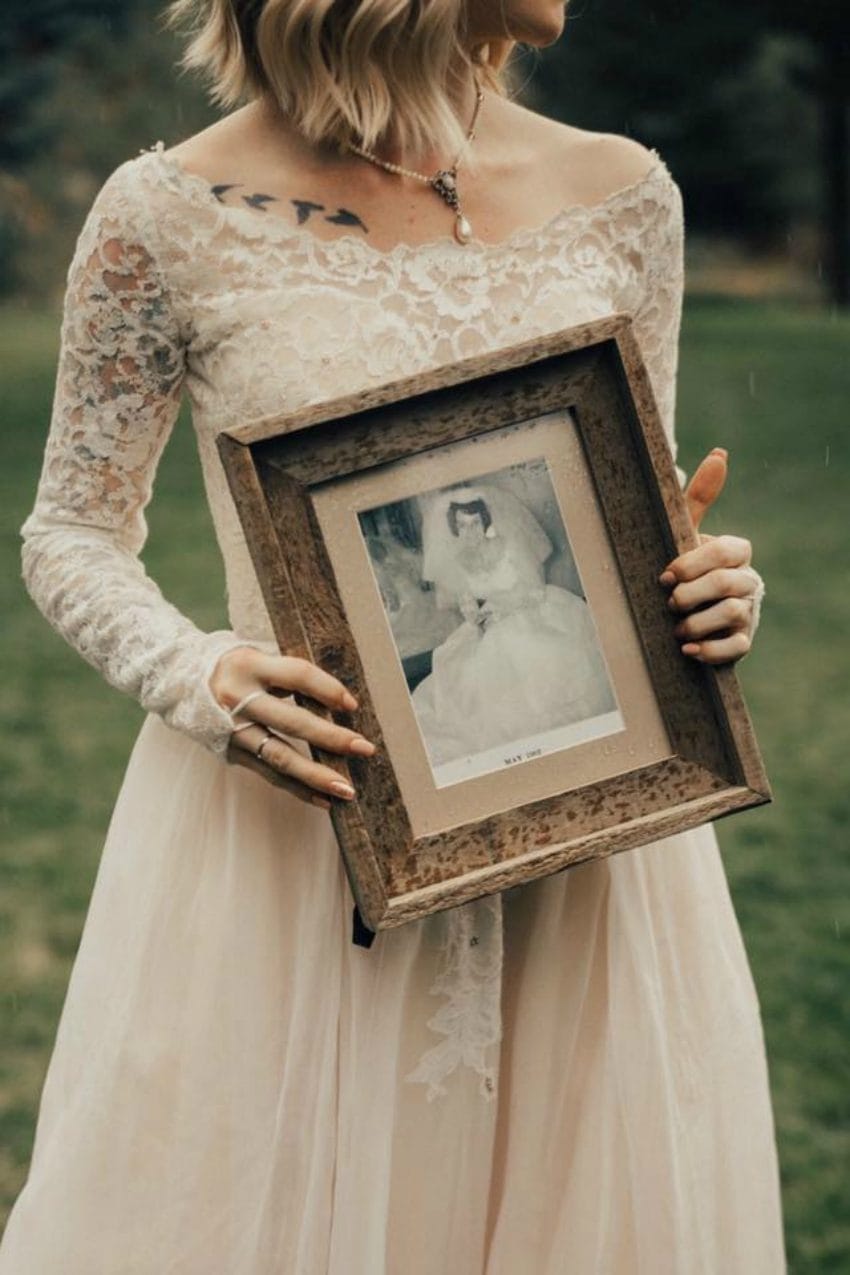 Jordyn decided to get married in her widowed grandma’s wedding dress, which she wore in 1962. Instead of asking her grandma to lend her the dress, Jordyn decided to make the event even more special by surprising her. Kortney Peterson, Jordyn’s wedding photographer, told LittleThings that grandma “had no idea the bride even had her dress in her possession.” 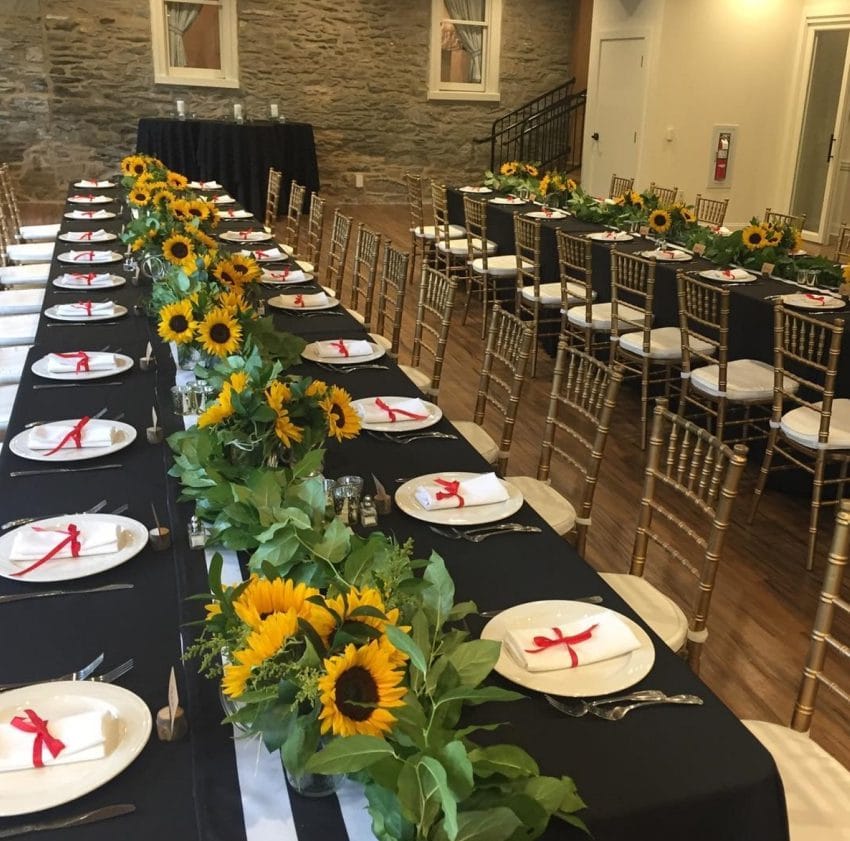 To surprise grandma, Jordyn and Kortney planned a special moment at the rehearsal dinner. 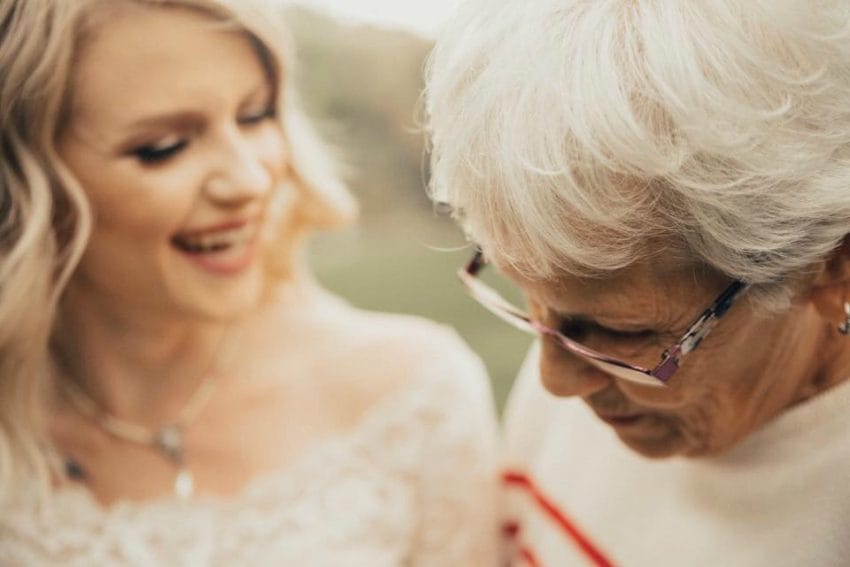 During the dinner, Jordyn and Kortney stepped outside so Jordyn could put on the dress. Then, they called grandma out for the surprise. 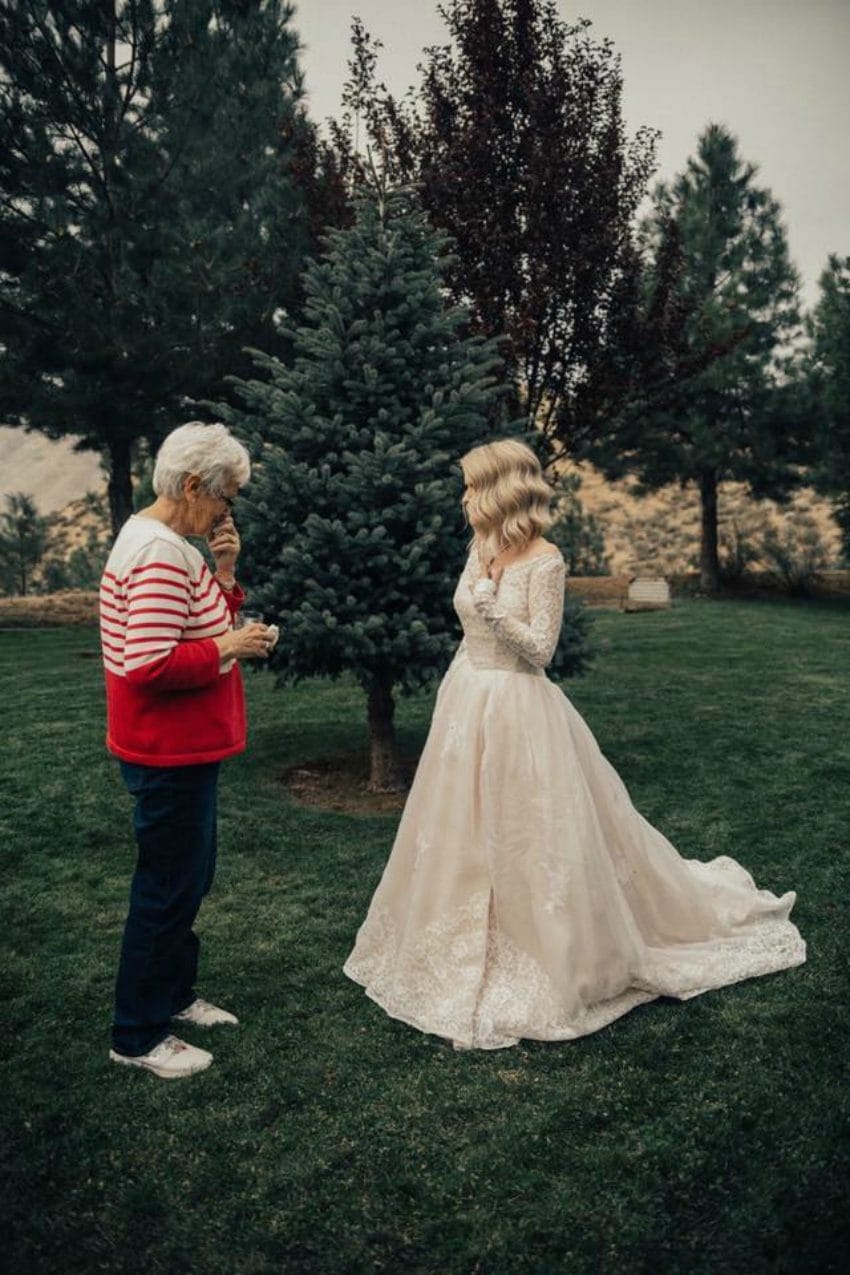 When Jordyn’s grandma stepped outside, the first thing she saw was a photo of herself at her own wedding. But when she turned around, she saw Jordyn wearing the same dress she had worn over 50 years before. 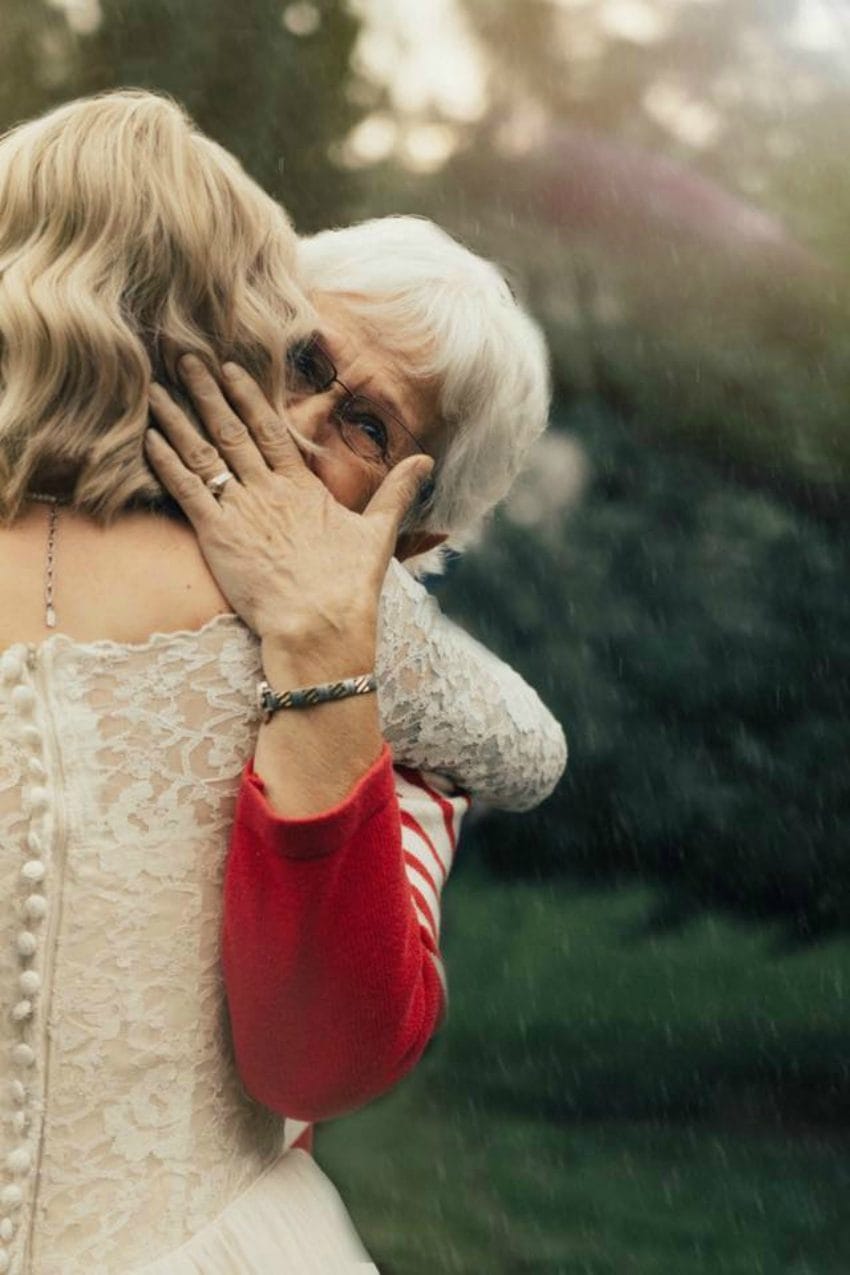 Kortney told LittleThings that, amazingly, rain began to fall at that exact moment, only adding to the atmosphere. She says, “It was an absolutely beautiful moment and everyone around was silent.” Until they started crying, that is.

You can see from the pictures how much this special moment meant to Jordyn’s grandma. This sweet way to honor her had everyone in tears, including thousands of people online. 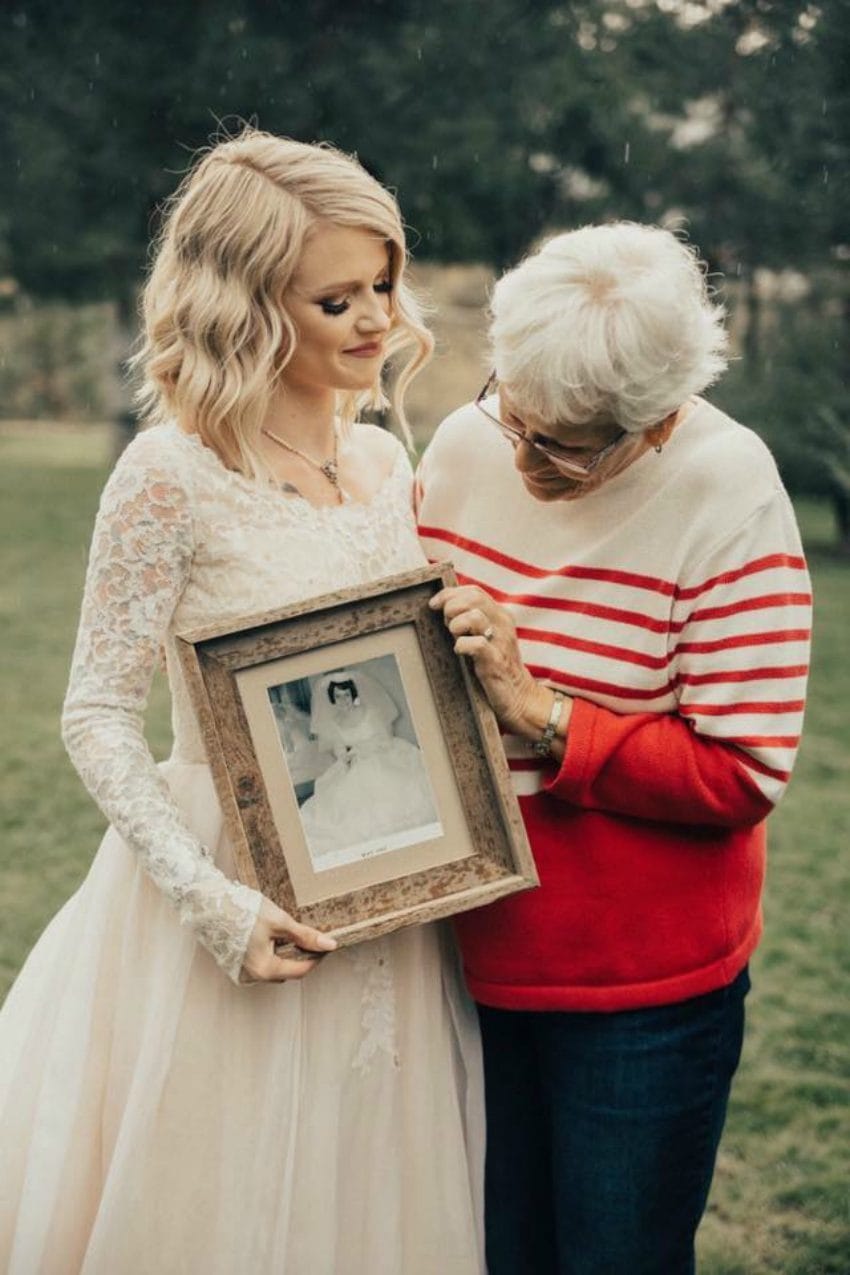 Jordyn and her grandma look equally beautiful in the stunning dress.