Home
Humanity
&
Shocking
She Catches Her Son Bullying, But The Way She Handles It Has Everyone In Shock

We always hear about the kids who are the victims of bullying and we listen to the parents who talk about how their child has been affected by the bullying. But what about the bullies themselves?

What about the parents of a bully? We never seem to hear who they are and who the parents are who raise them. Well here we have one mom who has come forward and is speaking out, yet in a very controversial way. Her child is not the victim of bullying. Her child is the bully. This 30-year-old mom caught her son Jacob bullying a girl at school and immediately became very upset, and no doubt highly embarrassed. She decided to tag her son on Facebook, in this post she made: 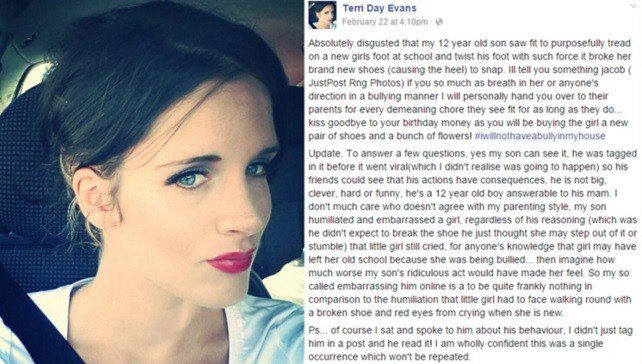 “Absolutely disgusted that my 12 year old son saw fit to purposefully tread on a new girls foot at school and twist his foot with such force it broke her brand new shoes (causing the heel) to snap. I’ll tell you something Jacob, if you so much as breath in her or anyone’s direction in a bullying manner I will personally hand you over to their parents for every demeaning chore they see fit for as long as they do… kiss goodbye to your birthday money as you will be buying the girl a new pair of shoes and a bunch of flowers! ‪#‎iwillnothaveabullyinmyhouse”

She had racked up over 50,000 likes to her post. But not everyone was in agreement with what she did. Rather than deal with this privately as a family manner, she forever shamed her son and this will now live with him for the rest of his life, as the post has gone viral. Here was one comment that spoke in that direction:

“Your poor son. This will haunt him forever. A mistake at 12, now online for all to see.” And another said: “To out your son like this on Facebook is also a kind of bullying. He probably learned it from you. Too bad you can’t realize that.”

Since the comments have come in, the mother removed her sons tag and added a follow up post:

“Update: To answer a few questions. Yes my son can see it, he was tagged in it before it went viral (which I didn’t realise was going to happen) so his friends could see that his actions have consequences. He is not big, clever, hard, or funny. He’s a 12-year-old boy answerable to his mam. I don’t much care who doesn’t agree with my parenting style. My son humiliated and embarrassed a girl, regardless of his reasoning (which was he didn’t expect to break the shoe he just thought she may step out of it or stumble) that little girl still cried, for anyone’s knowledge that girl may have left her old school because she was being bullied… then imagine how much worse my son’s ridiculous act would have made her feel. So my so-called embarrassing him online is quite frankly nothing in comparison to the humiliation that little girl had to face walking round with a broken shoe and red eyes from crying when she is new.”

“Ps … of course I sat and spoke to him about his behaviour. I didn’t just tag him in a post and he read it! I am wholly confident this was a single occurrence which won’t be repeated.”

Pretty sad that a parent feels the need to get on Facebook and out her son to the entire world, rather than make things right between her family and the girls family in private.

Or is online humiliation a proper form of parenting nowadays?