Arfhy Santos, 20, and William Lopez, 24, alleged thrill-seekers caught on video, were being held at the Midtown South station house after getting arrested running down a cop with their Mercedes-Benz in Times Square, according to police. 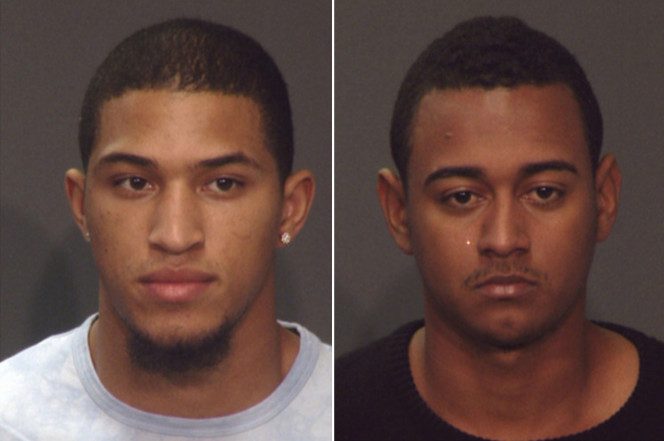 The NYPD’s Regional Fugitive Task Force was able to track Santos and Lopez down using security camera footage. They have not located the Mercedes.

“They have not found the vehicle yet,” Manhattan Chief of Detectives William Aubry said at a press briefing.

Santos and Lopez were allegedly inside the Mercedes C63 when it was seen driving up the middle of Times Square last weekend, according to officials.

Lopez, who owns the vehicle, was in the front seat while Santos was allegedly behind the wheel. A third individual still at large, was in the back seat. Police say they are treating him as a witness, rather than an accomplice.

Investigators said Santos and Lopez both have criminal pasts and they are members of the same Bronx car club. Officials did not provide details about the group or how it operates.

“Based on past actions of these two people, they don’t just give up, they don’t just surrender,” Aubry explained. “They try to escape — and they use a vehicle as a weapon to do so. That’s in their history that we looked at. They use whatever means they have to flee that scene.”

In the video footage of the incident, you see smoke coming from the Mercedes’ tires as Santos attempts a burnout near the Army Recruiting Station. It was at this moment that Officer Ian Wallace, 26, approached the car and ordered the driver to pull over.

They did not stop and the  Benz kept going clipping Wallace as it sped away.

Moments after being thrown from the hood the officer can be heard saying “Get that car!”

The pair managed to make a clean getaway, traveling west on West 42nd Street while hitting several cars in the process, officials said.

Wallace was taken to Mt. Sinai St. Luke’s hospital suffering from minor injuries to his right leg and hip, chest, arms, and back. He and was expected to make a full recovery.

“He stood in harm’s way and attempted to stop that vehicle,” Aubry said, noting how Wallace’s “instincts took over.”

“These are men that drive these cars, and, as you’ve seen on the video, they don’t stop for police officers.”

The man who filmed the now-viral video of the incident blamed the officer and actually defended the reckless driver.

“He tried to get around the cop. I was right there,” photographer Kiefer Dixon explained on Instagram Live, insisting that he didn’t know the suspects.

“I’ve seen police come up to cars before — they come up the nice and slow pace, not charging at them,” Dixon said. “They give the cars a ticket or tell them to relax. This cop ran out to the street, yelling at the guy and whatnot.”

“He’s a brave officer,” said the official. “It took a lot of courage to try and stop that car.”