Whoever is in charge of handing out the ‘World’s Greatest Sister’ award might want to pay attention.

One conscientious older sib lovingly handmade a DIY version of a pair of beautiful $6000 designer heels, just so her baby sister could wear them to prom!

The unnamed big sister took to image-sharing site Imgur to share her dedicated labor of love.

Big sisters are always there to lend a hand like we saw with the adorable little girl who scooped her baby brother up in a hug the first time she met him.

Still, we don’t know many siblings who would be willing to create such an elaborate and beautiful creation, just to make their younger sister happy at prom!

It’s a truly adorable gesture, and it’s all the more impressive because it clearly took a lot of hours and tons of hard work to recreate the expensive designer heels.

Scroll through below to see how this sweet sister makes a cheap pair of shoes look like a million bucks!

The world’s greatest big sister took to Imgur and Reddit last year to share an amazing project she put together for her sister’s prom.

Her inspiration was a pair of dramatic platform pumps from the designer brand Christian Louboutin.

She explains on Reddit, “My sister expressed an interest in the designer shoes, and no one that I know would ever consider shelling out that kind of money for a pair of shoes, so I did the best I could with what I had to work with.”

The pretty pumps, pictured above, were completely encrusted with Swarovski crystals and retailed for nearly $6,000.

Fortunately, this crafty young woman was able to DIY virtually identical shoes for a tiny fraction of that mind-boggling price. 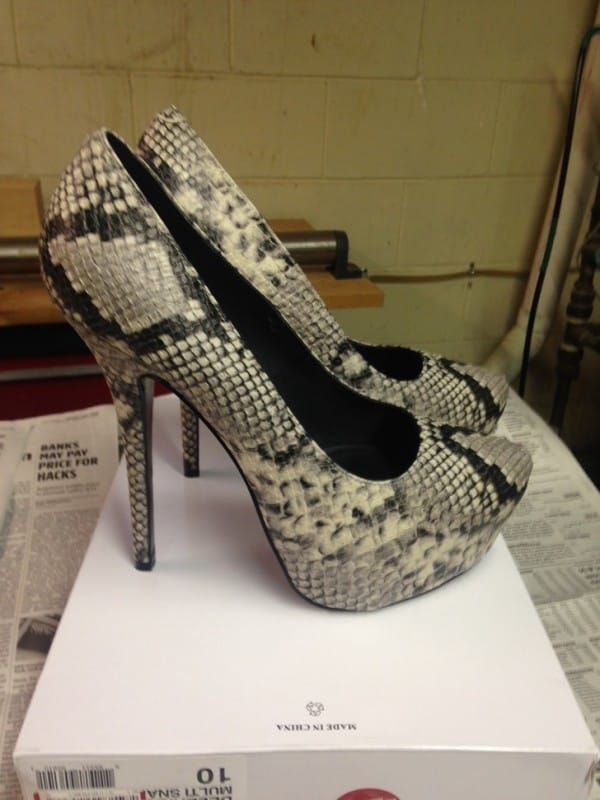 First, she bought a pair of relatively cheap heels that had the same dramatic platform silhouette as the designer shoes.

She ended up with a $25 pair of platform pumps in a snakeskin print.

The pattern wasn’t anything like the designer version, but the shape and height of the shoes were perfect. 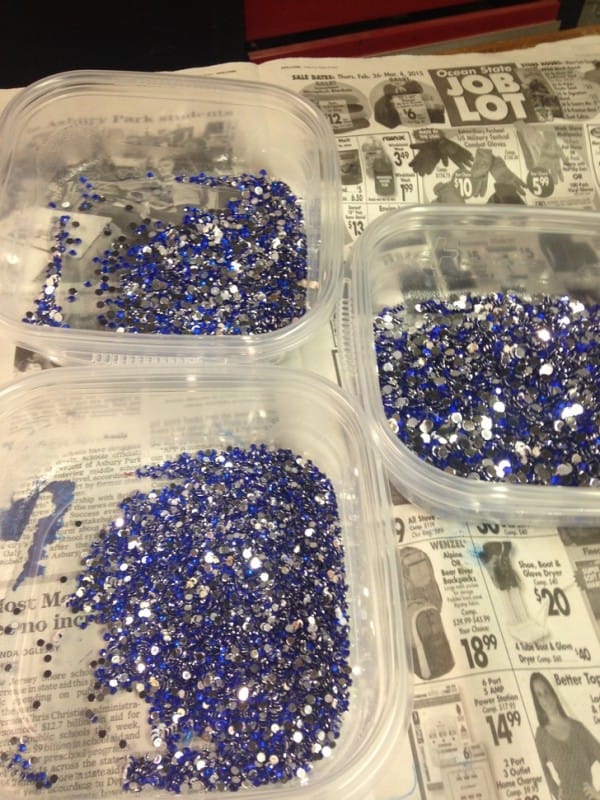 Then, she picked up a few basic crafting supplies.

All in all, she spent an addition $15 on her trimmings and supplies, for a grand total of $40. If you’re keeping track, that’s 1/150th of the original price. 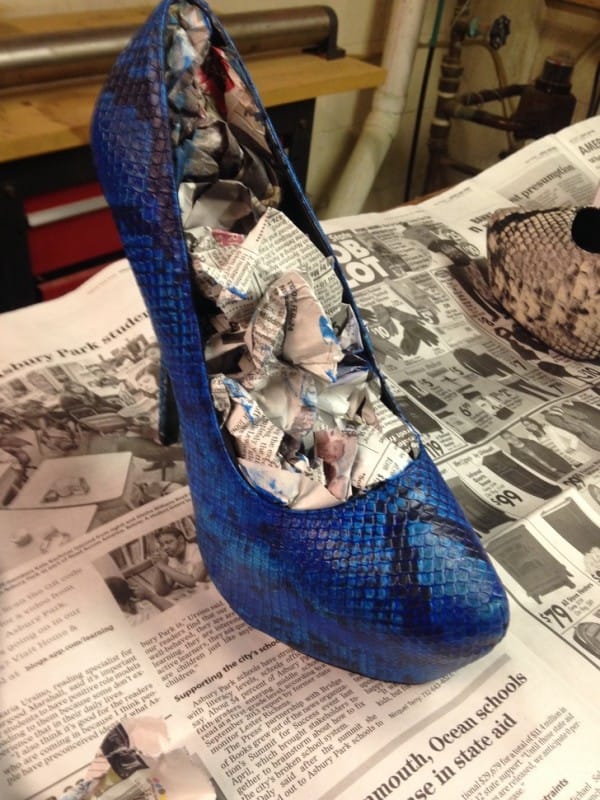 Stuffing the shoes with newspaper, she painted over the snakeskin print with the blue acrylic.

The result was a pair of pretty blue pumps that still retained the snakeskin pattern but looked like they were dipped in a vat of dye.

In this case, the pattern didn’t matter much, because it was all going to be covered up soon anyway; she just needed a blue background for when she layered on the rhinestones.

Once the blue layer of paint was dry, she used painter’s tape to cover up the edges, leaving the sole of the shoe exposed.

She flipped the shoes over and painted them a bright, vibrant red. Red soles are the signature mark of Louboutin shoes, so this was a nod to the designer inspiration.

She coated the red paint with glossy polyurethane varnish, to give them that shiny look, and let them dry. 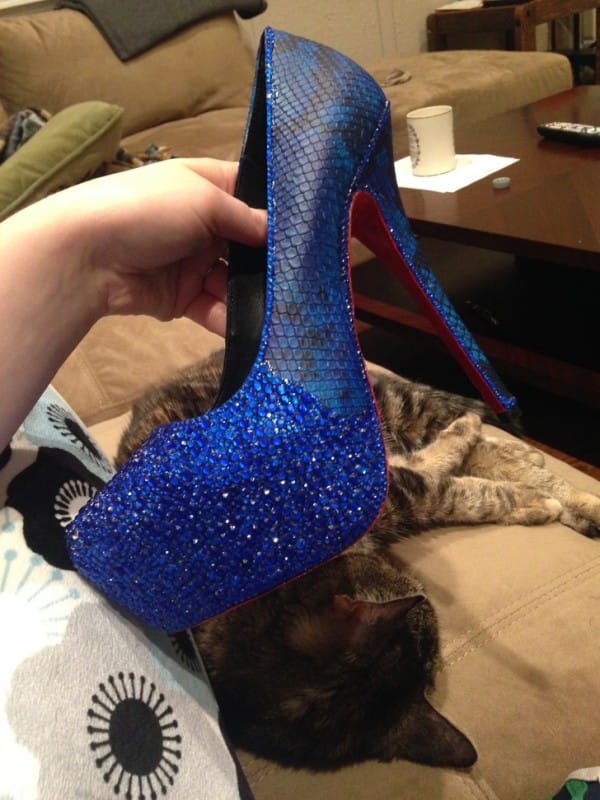 Next, she allowed the paint and varnish to dry completely before removing the blue painter’s tape around the edge.

Then, she edged the upper of the shoe with delicate little rhinestones.

Gradually, spreading out small blobs of glue across the surface, she filled in the whole surface of each shoe with rhinestones.

She used rhinestones in a few different sizes to make sure she would be able to fill in gaps between stones. 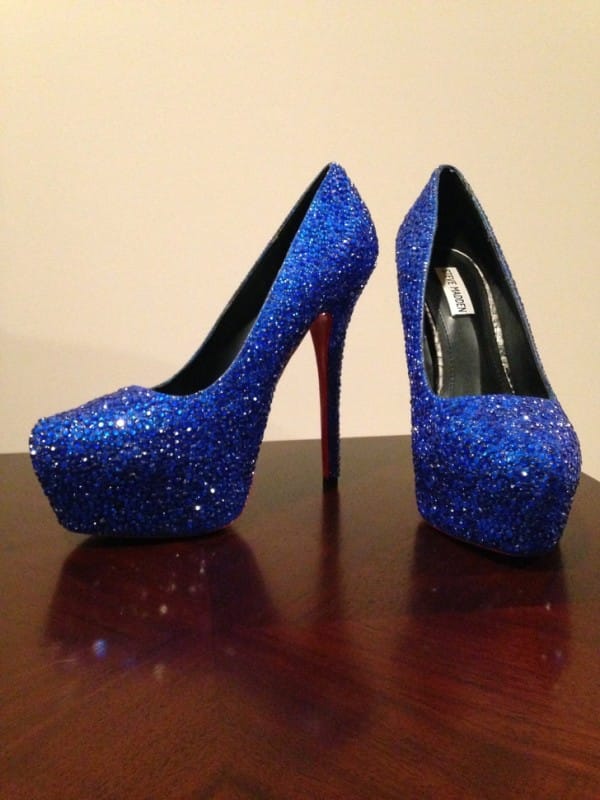 Before long, she had a pair of beautiful prom shoes, ready and waiting for her little sister’s big prom night!

If you ask us, her version honestly looks even better than the designer original; her DIY skills are seriously impressive. 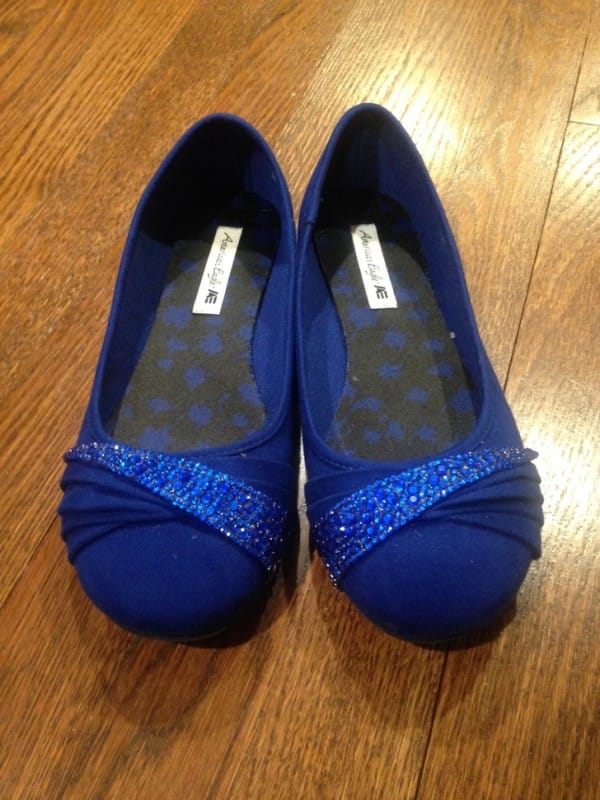 If you weren’t already convinced that this woman is the most thoughtful big sister in the world, you have to see her beyond-adorable finishing touch.

She picked up a pair of royal blue flats and bedazzled them with a strip of rhinestones, for when her little sister’s feet inevitably get tired of those sky-high heels!