Home
Humanity
Mother Outraged After Finding Out Son Bullied New Student, Handles It In Her Own Way…

A horrendous bullying incident recently happened at a high school in Russia. A teen was being horribly bullied in a classroom while the teacher watches and laughs.

When single mom Terri Day Evans from Shropshire, England discovered that her son was the bully, she to take drastic measures. She turned to a very public forum to embarrass the boy in front of his peers.

Her public Facebook punishment not only embarrassed the 12-year-old,  but it went viral! Now this boy understands there are consequences to his actions. Read what she wrote below… 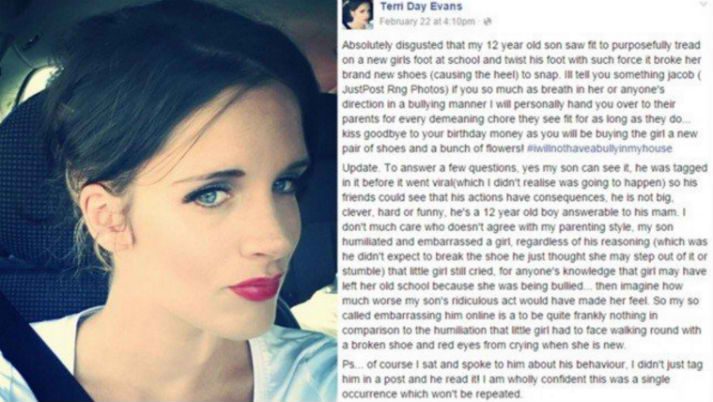 “Absolutely disgusted that my 12-year-old son saw fit to purposefully tread on a new girls foot at school and twist his foot with such force it broke her brand new shoes (causing the heel) to snap. I’ll tell you something Jacob, if you so much as breath in her or anyone’s direction in a bullying manner I will personally hand you over to their parents for every demeaning chore they see fit for as long as they do…”

Because her son had targeted a new kid at school, someone who was at a disadvantage, mom was outraged. Her son was a coward and he was going to learn that bullying cowards never get ahead in life.

More than 55,000 people liked this mother’s post. She went on and wrote:

“Kiss goodbye to your birthday money as you will be buying the girl a new pair of shoes and a bunch of flowers! ‪#‎iwillnothaveabullyinmyhouse”

The post fueled a heated debate as to whether this mom should have chosen such a public forum to punish her son.

“Why extend the humiliation? Your poor son. This will haunt him forever. A mistake at 12, online now for all to see,” wrote a sympathizer.

Another was even harsher: “To out your son like this on Facebook is also a kind of bullying. He probably learned it from you. Too bad you can’t realize that.”

Terri shot back with an update.

“Update: To answer a few questions. Yes my son can see it, he was tagged in it before it went viral (which I didn’t realize was going to happen) so his friends could see that his actions have consequences. He is not big, clever, hard, or funny. He’s a 12-year-old boy answerable to his mom. I don’t much care who doesn’t agree with my parenting style. My son humiliated and embarrassed a girl, regardless of his reasoning (which was he didn’t expect to break the shoe he just thought she may step out of it or stumble) that little girl still cried, for anyone’s knowledge that girl may have left her old school because she was being bullied… then imagine how much worse my son’s ridiculous act would have made her feel. So my so-called embarrassing him online is quite frankly nothing in comparison to the humiliation that little girl had to face walking around with a broken shoe and red eyes from crying when she is new.”

In the end, she closed the debate with a postscript.

“P.S.… of course I sat and spoke to him about his behavior. I didn’t just tag him in a post and he read it! I am wholly confident this was a single occurrence which won’t be repeated.”