Brittany was once fifteen pounds underweight due to eating a maximum of 600 calories per day, but now she is “a quirky, plus-sized ED survivor” and an active eating disorder recovery advocate. 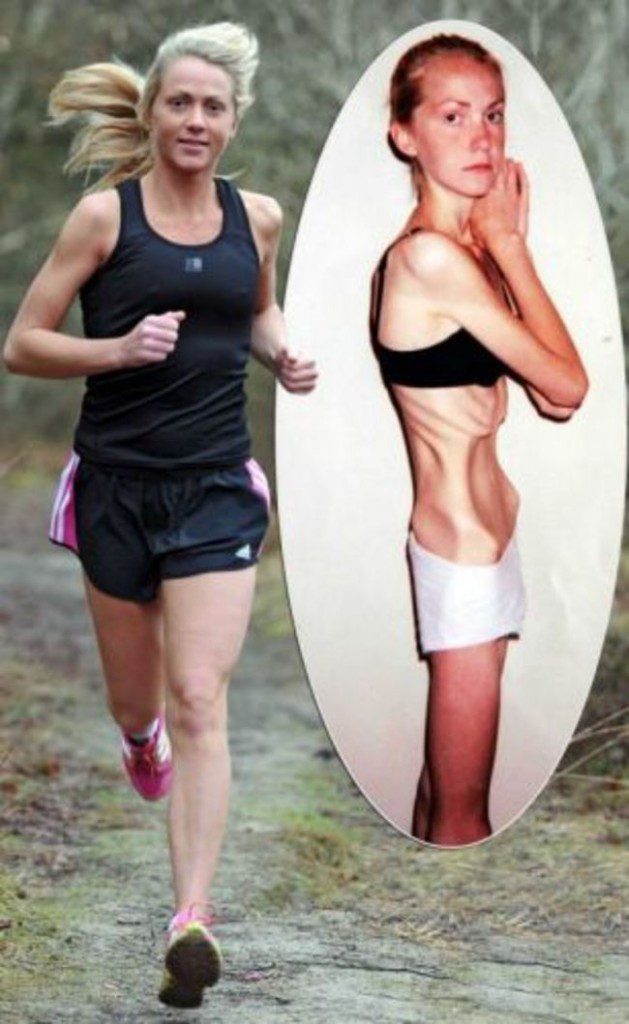 Harriet Smith struggled with an eating disorder for years, at one point weighing only 70 lbs. When she was told that she was just weeks away from death, she made an effort to change her life. Now, she weighs about 120 lbs and is a strong, active runner. 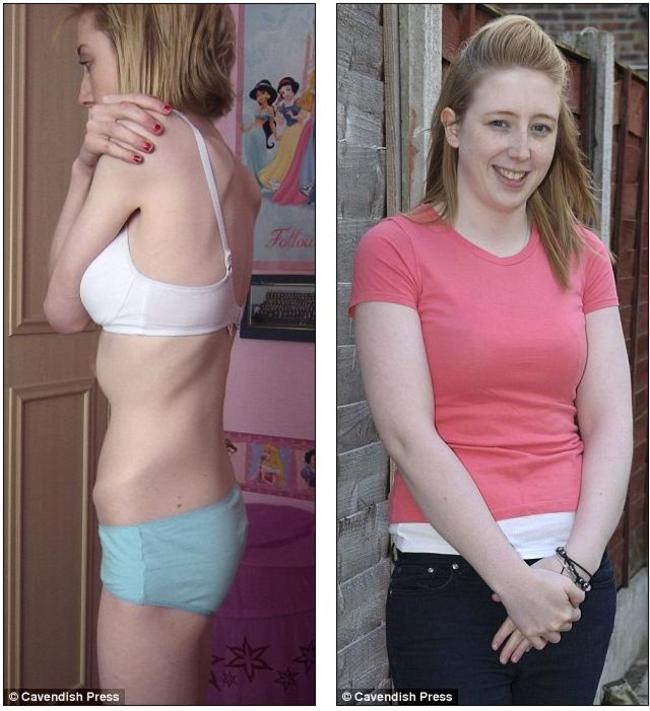 Rachael Johnston’s four-year battle with anorexia left her weighing just 63 lbs. The 20-year-old claims that she developed the disorder after idolizing the “perfect” bodies of celebrities and models that had really been digitally edited to appear flawless… and thin. Now much healthier (and happier), she and her mom are pushing for magazines and advertisements to stop photoshopping their models, which could help prevent young girls from developing body image problems. 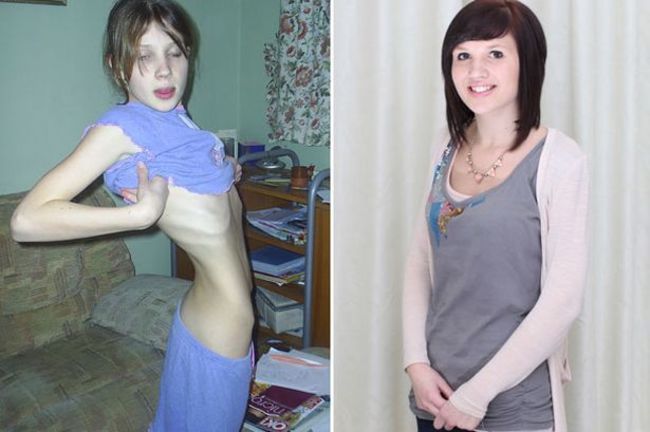 Jo Thompson developed anxiety and an eating disorder at age 11. After she was given 48 hours to live at age 17, she applied for a job at McDonald’s, thinking that seeing other people eat would encourage her to do the same. While working there, she fell in love with her manager, who encouraged her to eat. The couple now have two children, despite fears that Jo’s illness would have affected her fertility, and the whole family is happy and healthy. 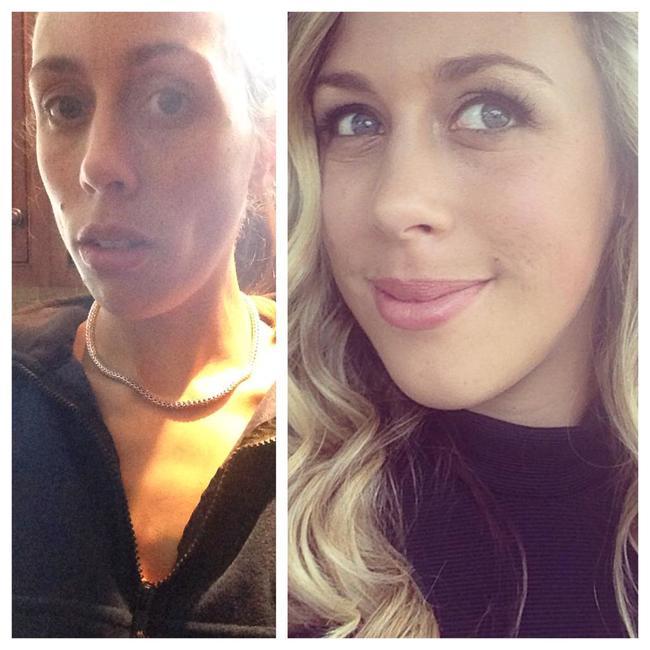 This twenty-five-year-old woman once weighed 103 lbs: a weight that was definitely too low for her 5’7″ frame. But after gaining 25 lbs over the course of sixteen months, you can see her progress in the structure of her face… and the smile that she wears. 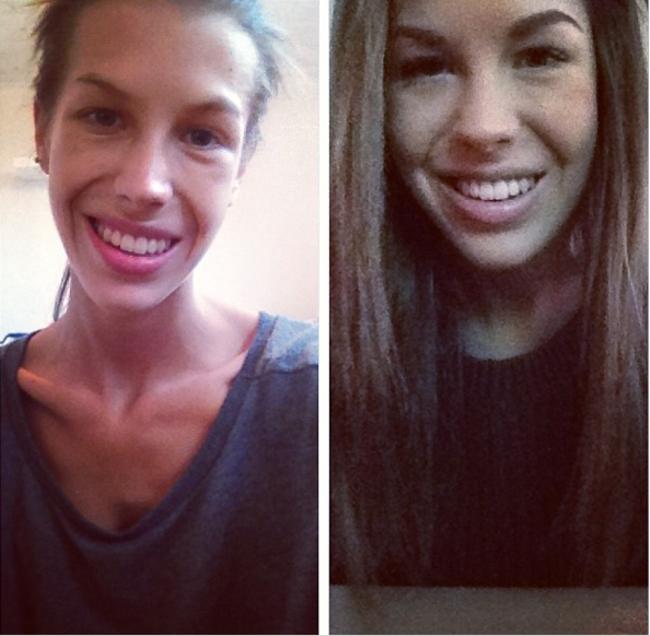 Antonia Eriksson’s first photo on Instagram was a picture of a hospital room, with a caption that said that she was going to the hospital for her anorexia. She decided to blog about her recovery, and soon, a chilling photograph turned into an incredible Instagram account that documents the struggle and amazing triumphs of a determined young lady. Now, Antonia’s photos are all inspirational, involving her strong body and the healthy foods that she makes. Meg says she hit her lowest point during her junior year of high school, when she confessed her eating disorder to her parents. She went to a psychiatrist, who told her that she’d have to spend the next year in the hospital. Instead, Meg decided to make a change herself. She went to therapy and had a dietitian plan her meals. Once she was healthy enough, she took up weight lifting. Now, instead of skipping meals, she’s eating six times a day to help her body achieve its maximum potential. It’s taken her six years to get to this point, but she’s never going back. 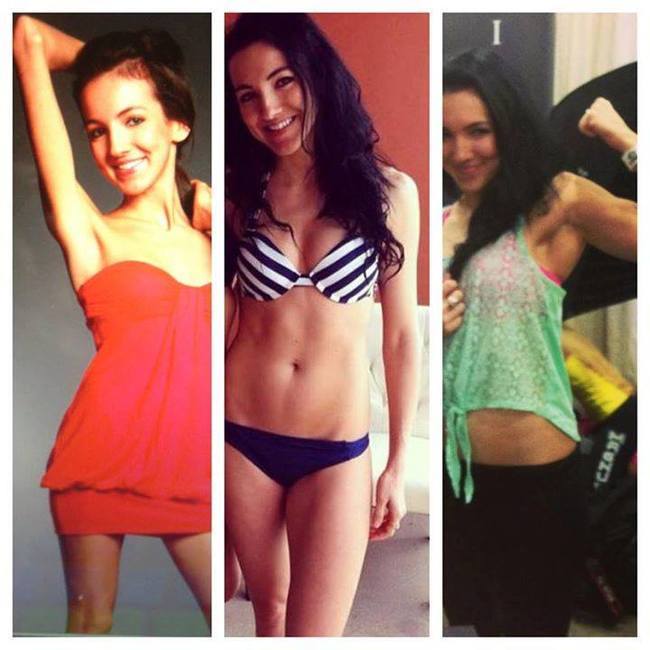 Morgan has a naturally slim figure, but when she hit 113 lbs due to her eating disorder, she admits that she “literally looked like a skeleton.” Changing her way of life for herself wasn’t going to happen at first, but when she realized that her disease was causing her boyfriend to worry, she decided that enough was enough. Without going to a single therapist, she researched the harmful effects that anorexia had on her body, and she made small, short-term goals for herself to become healthier. Now, Morgan has learned to balance nutrition and exercise to change herself into a stronger person both inside and out. Reddit user painted-black developed her eating disorder after feeling like she had to control something in her life. But with a lot of willpower and the support and love of her boyfriend (now fiance), she overcame it and now eats to fuel her body. 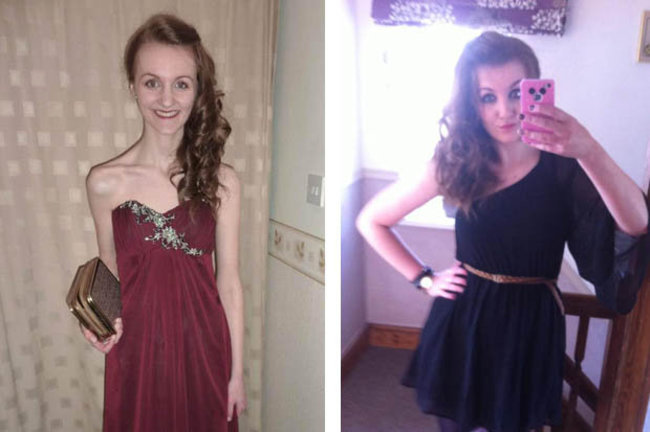 Heather Franks was at one point so thin that doctors wanted her to stay in the hospital, but a single trip to Disney World changed her life. She sat down in a restaurant, and after realizing that no one there knew her or the difficulties she had eating, she allowed herself to eat some pizza. After she remembered how good food could be, her outlook on it changed, and after she returned from her vacation, she continued to eat and reached a healthy weight. 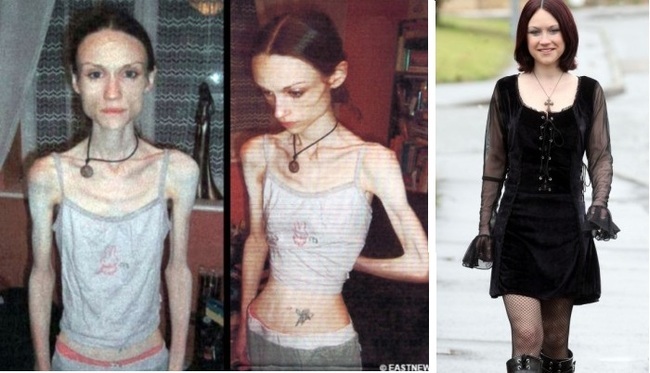 Lauren Bailey once weighed fifty pounds as a result of her anorexia: a disorder she developed as a teenager and suffered with for over ten years. She walked up to twelve hours a day to keep herself from gaining weight. After spending a considerable amount of time in the hospital, she finally decided to make a change. Now, Lauren is the picture of good health and hopes that her story can help others overcome their disease. 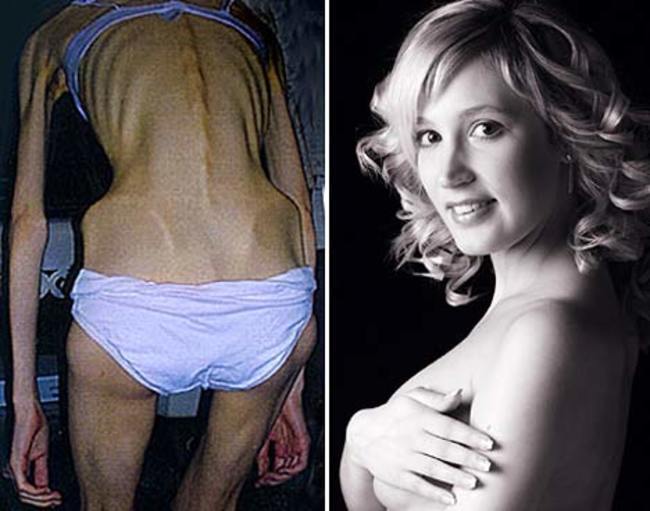 Hayley Wilde was once given ten days to live after an eight-year battle with anorexia had caused her weight to drop to dangerous levels. After being hospitalized multiple times, her mom helped her get back on track to a healthy lifestyle. Eventually, Hayley became pregnant, and her new eating habits enabled her to give birth to a happy baby boy. Hayley swears that she will never return to such an unhealthy weight for both herself and her son. 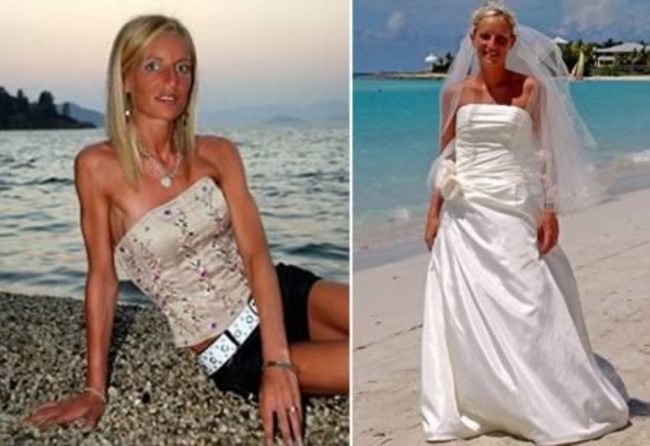 Kate Puncher developed anorexia after an ex-boyfriend threatened to break up with her if she put on weight. But thankfully, she married a much better man who helped her get healthy by buying her a wedding dress that was two sizes too big for her. He told her that she would have to start eating and gain weight if she wanted to fit into it. Determined to marry the man that she loved, Kate put on the weight, looked and felt amazing in her dress, and gave birth to a healthy daughter. Stress in school contributed to Matthew Booth’s anorexia, which at one point got so bad that his heart stopped. After seeing how much his near-death experience affected his mother, he focused on his recovery, and when he was healthy enough to exercise, he began lifting weights to gain muscle. Now, Matthew is a healthy, strong young man with plenty of self-confidence. Reddit user flyingsqueak is a trapeze artist, and when she was battling with anorexia, she couldn’t perform at her best. She was often tired and so sick that she had to miss practice. Now, she prioritizes being strong over being thin and can fulfill her true potential.

If you or someone you know is struggling with an eating disorder, please don’t wait to get help. Call the eating disorder helpline at 1-800-931-2237, use your friends and family for support.