A Washington woman allegedly took a swipe at her boyfriend after she found the Tinder dating app on his phone.

Emily Javier, 30, reportedly slashed her boyfriend with a samurai sword early Saturday in a violent act of vengeance when she suspected he was unfaithful, according to The Oregonian. 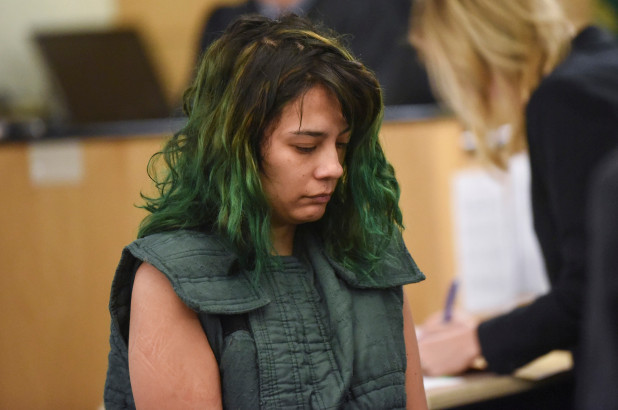 “The only motive our detectives can come up with is its jealousy based,” Camas police officer Debrah Riedle told news station KOIN. “The victim is not confirming that but everything the suspect told us leads up to believe her motive was jealousy.”

Javier told authorities that several discoveries, including his Tinder account and scratches on his back, led her to start plotting a grisly attack on her boyfriend.

The final straw was when Javier, whose hair is dyed green, found a red hair in their shower drain, according to The Oregonian.

Furious, the jilted girlfriend allegedly purchased a samurai sword from the mall and waited for an opportunity to attack, police said.

Javier waited for her boyfriend to fall asleep and repeatedly slashed his throat with the samurai sword, police said.

“I was trying to kill him,” she told authorities, according to The Oregonian.

Eventually, Javier called 911 saying that she thought she killed her boyfriend. Officers arrived at the home to find the 30-year-old woman outside pleading for help.

“I just stabbed him!” Javier said, according to a probable-cause affidavit. “You guys need to help him!”

Authorities discovered Lovell inside with “injuries all over his body” and curled up in the fetal position, KOIN reported. He was rushed to the hospital in critical condition.

Javier was taken into custody and booked into Clark County jail on first-degree attempted murder charges.

She appeared Monday at Clark County Superior Court, where her bail was set at $350,000.