The letter below will have you laughing out loud. It is written by an 8-year-old boy to his mom. Mom Liesl explained that her son spent the summer at a camp for the first time.  She was not sure if he would write to her.

Check out her son’s letter and what she had to say about it: 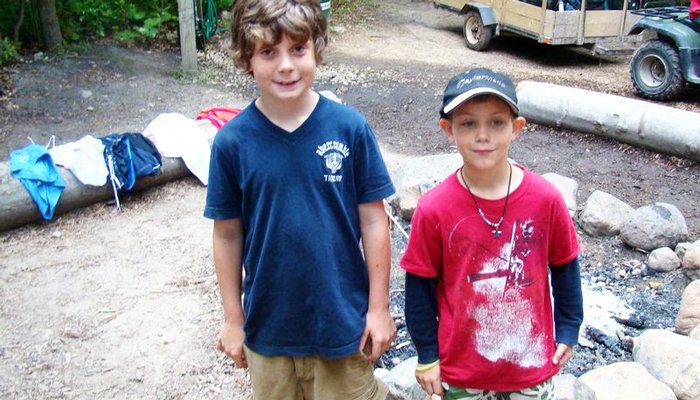 “Last year, my eight year-old son went to summer camp. It was the first time he had been away from home for more than a night. An hour after I dropped him off, I missed him. By the time I went to bed, I found myself wandering into his bedroom, just to feel close to him.

As the days passed, I wrote to him daily. Each hour dragged as I’d wait for the mailman, hoping for just one letter from him. By that point I missed him so much, I began to imagine what he might write.

I fantasized that one of his letters from camp would look something like this:

Thank you so much for letting me go to camp. I have learned so many cool things, like how to take a fish off the hook, tie sailing knots, and how to groom a horse. Thanks for packing sun screen. I’ve been out on the lake a lot, so it’s really come in handy. You think of everything! I’ve been drinking tons of water since it’s so hot. See? I do listen to all your good advice.

The other boys in my cabin are really smart and nice. I’m making lifelong friends I will cherish forever. We’ve had fun learning camp songs, playing cards, and catching frogs in our free time. During quiet time, I read the book you sent along. What a great selection!

Like you suggested, I’m trying a lot of new foods. You were right, the oatmeal at breakfast isn’t bad if I add raisins. And don’t worry, Mom, I’m using all the manners you’ve taught me over the years.

We’re camping under the stars tonight. I hope to see fireflies.

P.S. Tell my brothers I miss them!

The next day I received an actual letter from him. It was just slightly different from what I imagined: 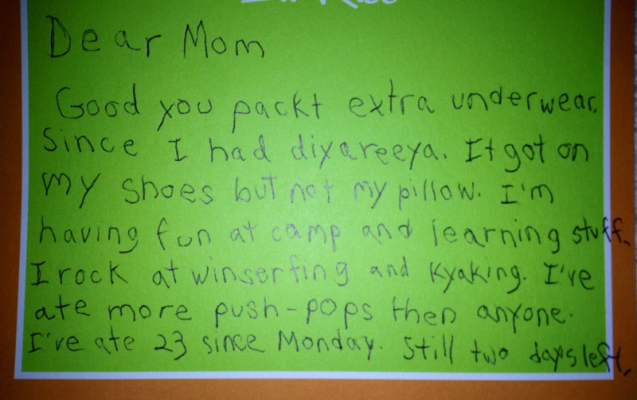 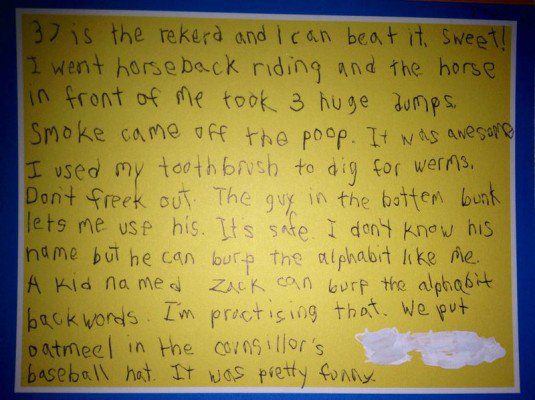 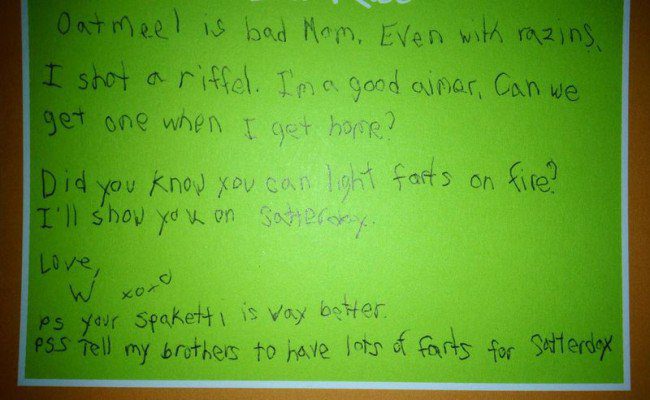 This year I’m sending a whole book of stamps to camp with him.

Can’t wait to see what he writes!