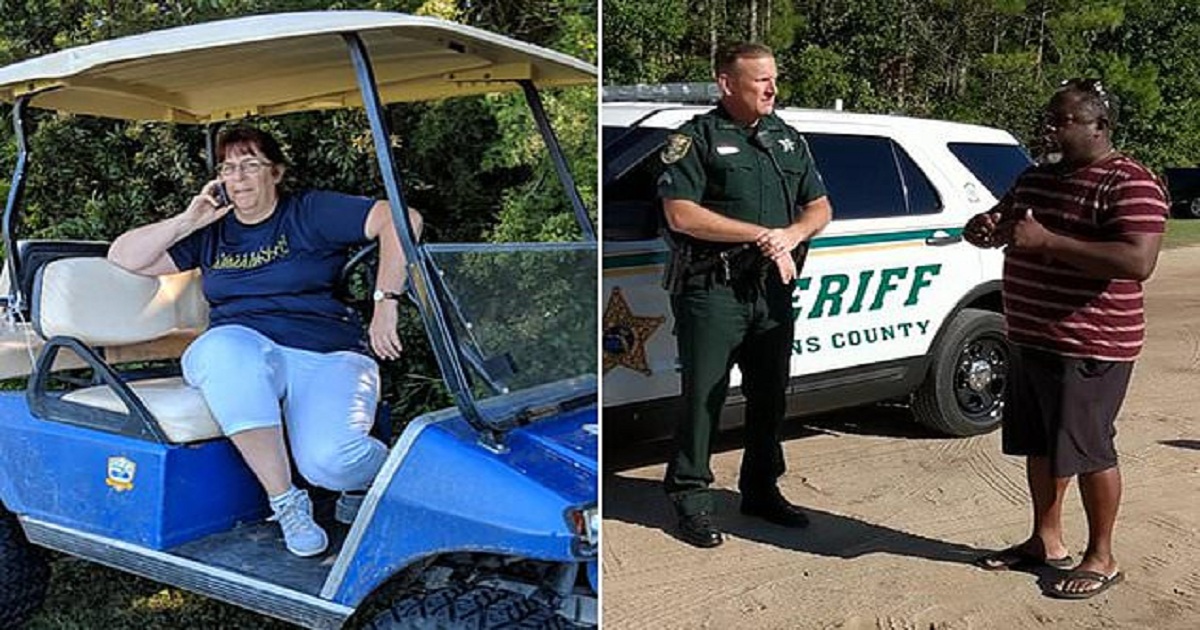 A white woman has been filmed calling the police on a black father for yelling instructions at his son during a soccer game in Florida.

The woman, who has not yet been named, was dubbed ‘golf cart Gail’ by horrified witnesses.

She was filmed sitting in her cart on the sidelines of the game in Ponte Vedra and watching as the man shouted out to tell his young son that the ref was ‘right’.

The woman, who was acting as a field marshal, mistook his comments for him harassing the referee and confronted him.

When he explained that he was only talking to his child and no one else, the woman, it is claimed, carried on the altercation.

Despite the man telling her, he would leave to avoid an ‘issue’, she, according to witnesses, followed him away from the soccer field and called the police, claiming she did not feel safe around the man’s ‘threatening behavior’ after he told her that their conversation was ‘done’.

Ginger Williams, a Black Lives Matter advocate, filmed the aftermath once police had shown up.

She told ABC News she was told by the woman to leave, claiming she said: ‘Ma’am, you can leave too. Videotape yourself as you’re walking out.’

Both questioned why the field marshal called the cops on the black father and not a white man who had been asked to leave earlier in the game for improper behavior.

In the video, ‘golf cart Gail’ admitted to police that the father was, it turned out, speaking to his son and not the referee but she said he became ‘nasty’.

‘And I went on to just kind of explain, you know, “I’m just trying to make sure everything’s”… and then he starts, [he] gets nasty with me.

Williams, the woman who filmed their interaction, asked the cops to promise that the man was ‘safe’.

‘From this entire situation from everything… I don’t understand why this woman felt the need to call the police on this man.

‘I’ve never in my life seen anything like this happen to anybody. The gentleman before him, absolutely, rude, screaming. This man said, “Hey, I’m only talking to my son.”

‘I felt that this woman sat there on her cart and was a very intimidating presence. It was a non-issue and then she came zooming around.

‘She’s sitting there just waiting to create tension. To then follow this man out when he said, “Hey, I’m going to leave. I don’t want an issue.”

‘Why [did] she feel it was necessary, when he voluntarily left on his own accord, to call the cops?”

The woman stood with her arms behind her back as Williams questioned her.

Her video ends with the man pacing around the parking lot while the woman stood in between the two police officers who had been called.

The police let the man go without charge after telling him they had no reason to arrest him.

Gary Easom, president of the Ponte Vedra Athletic Association, said the field marshal was trying to control parents’ behavior and that it was not a racial incident.

‘This happens more times than I would like,’ he said of parents behaving badly on the sidelines.

It is the latest in a string of racially-charged incidents across America in which a white person is filmed calling the police on a black or Hispanic person for no good reason.

Other recent incidents include a black man being stopped from entering his own apartment block by a white realtor for no reason and a black boy being accused of groping a woman in a store in Brooklyn when in fact his backpack had merely brushed past her.