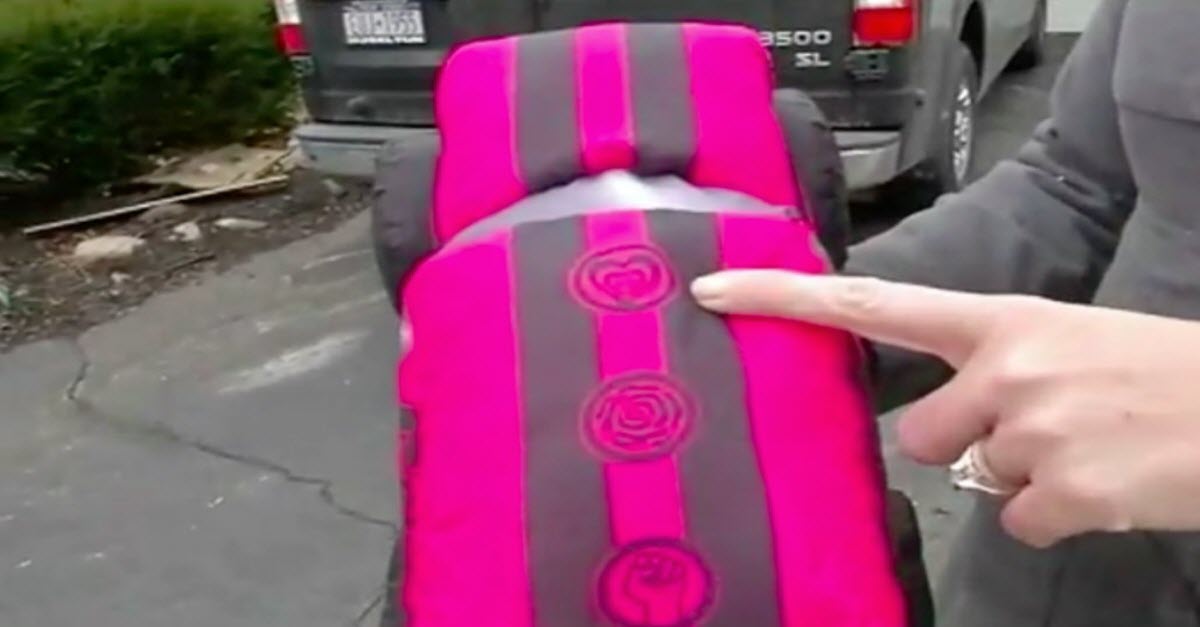 Nickie O’Kelly was ecstatic to find a toy her 2-year-old daughter would actually like when she attended a Monster Jam truck rally in January.

“I actually thought it was cute because it was pink,” said O’Kelly about the stuffed truck. “I was like ‘Oh, they actually have a pink toy for a girl, that’s really cool.'”

But when she found out what the logo on the toy meant, her enthusiasm turned to disgust. Now her goal as the mother of three is to warn others about a strange logo she noticed printed on the toy , it might actually be a secret symbol used by pedophiles to communicate with each other.

The concern over the toy originally started after O’Kelly’s oldest daughter said she had seen the double heart symbol, on an episode of “Law & Order: SVU” before.

A local news station tracked down the episode in question, in which a child is sent the symbol from her abuser.  The show’s script explains what it means: “Hearts within hearts, girl lovers. That’s a secret code for pedophiles.”

“When I see that heart inside the heart, it’s pedophile,” said Potter of the symbol. “It’s that underground culture that they use to communicate.  They’re giving it to their daughter thinking it’s a toy and then to someone else it could mean criminal behavior.”

Upon learning this, O’Kelly was absolutely devastated!

“I’m absolutely sick. I bought this for my 2-year-old little girl. This toy was made for little girls. I wanted answers.”

While police were surprised to find a symbol similar to one used by pedophiles on a children’s item, they assure that logo poses no danger to children who own the toys.

The company who manufactured the item, Feld Entertainment, acted swiftly upon learning the unsettling news.  They have since pulled the toys from the shelves, and are urging anyone who purchased the toy at a Monster Jam event to contact them.

“We’re shocked. We had no idea. We reacted immediately. We wanted to do the right thing as quickly as possible. Clearly we’re in the business with providing high quality family entertainment. This was really obscure. Until yesterday, I had no idea there was an underlying meaning of these symbols and the deplorable behavior. We just don’t know if a crime was committed here. We have not been contacted by LEOs [Law enforcement officials.] We just want to make sure it doesn’t happen again.”