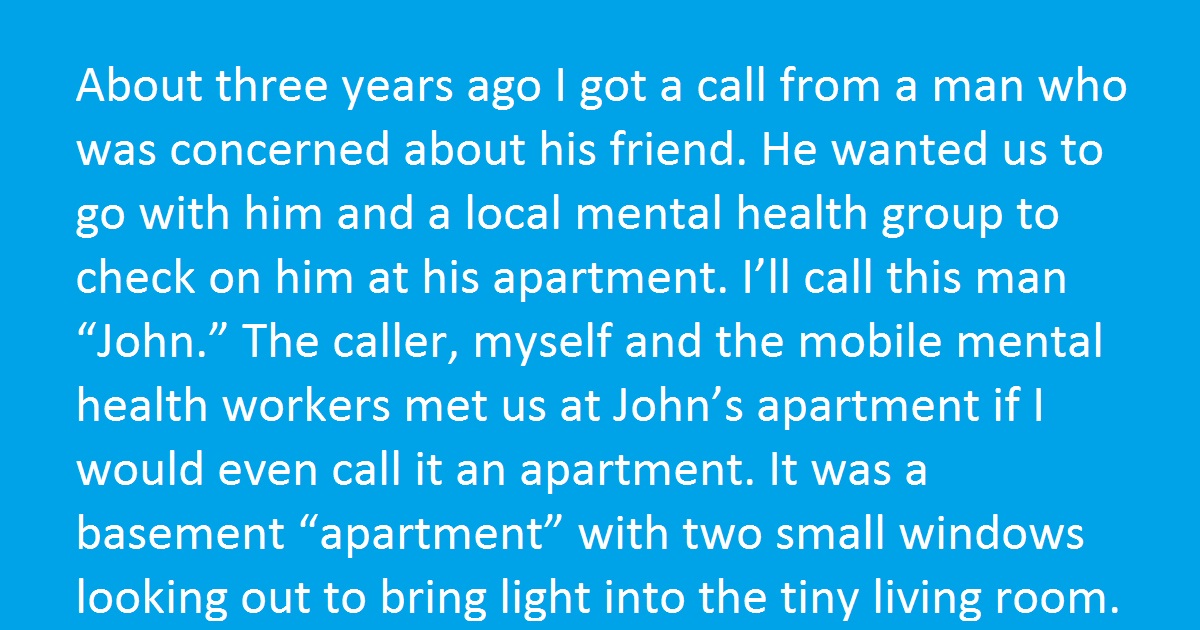 About three years ago I got a call from a man who was concerned about his friend. He wanted us to go with him and a local mental health group to check on him at his apartment. I’ll call this man “John.” The caller, myself and the mobile mental health workers met us at John’s apartment if I would even call it an apartment. It was a basement “apartment” with two small windows looking out to bring light into the tiny living room. The place was pretty Spartan except for a bed, a kitchen table with no chairs, a couch, and a small coffee table with a three-inch thick journal that was completely filled up with John’s writing on the front and back of every page. I quickly learned that John was a Marine and had very recently returned from a two-year tour in Iraq and Afghanistan. Those two years completely and utterly messed him up.

He knew basically why we were there, and admitted that he wanted to just kill himself but was not brave enough to do it. He went on to tell me about how he had to kill men, women, and children while he was at war, and read some pages for me out of his journal. I won’t write what he read to me, but they were the deepest and most heartbreaking words I have ever heard read out loud. I learned that after he was at the end of his tour, he was shipped to Italy to await his trip home and tried to kill himself. He was placed in a mental facility that he described as something out of a horror movie. Once he finally got home, the Marines gave him his honorable discharge and booted him out without another word. It took every ounce of strength I had not to cry. It took a long time, and a scary moment where I thought he was going to fight us, but we were able to convince him to go get real help. I told him we could call him an ambulance to bring him to the hospital because if I drove him, my department rules stated I would have to handcuff him. He didn’t have insurance, so I was forced to take him in handcuffs. He got in the back of the police car and started to cry quietly to himself. I broke down at that point. When we got to the hospital, I took him out, un-cuffed him, and hugged him. He broke down into violent sobs in my arms, and we ended up on the ground just crying and holding each other. What did I learn from this one call? That the military and America failed this man. They sent him to war, offered no help when he needed it, and then booted him out into the world. Flash forward 2 more years, John is 100% better. He was transferred to a VA hospital and got the real treatment he needed.

I happened to pull over his friend who made the call, for speeding, and he told me how John had made a complete change and was so much better. It was the best ending I could have imagined for the worst call I’ve ever been too.