I want to cry so hard right now but holding strong and sending positivity. Was at the Mustang gas station by my house about 15 miles out of Gallup when I came across a Cheii (Grandpa) that was kicked out of a vehicle and left on the ground. A few people helped him up, and I drove up next to him. No one was talking to him because he only speaks Diné Bizaad. I asked him what he was doing, and he said he was left there by the boys he came into Gallup with, from Chinle.

He was stranded and scared and was kinda starting to cry every now and then, but seemed glad I could talk with him. Carrying on the convo in Diné Bizaad, he said he would probably end up sleeping outside by the store. Enraged, I couldn’t let that happen. I asked if he had family in Gallup that I could take him to, he didn’t. He said he could give me $20 to take him back to Chinle. I asked if he has any phone number on him of someone I can call. He brought out his wallet and gave me a number to someone in Phoenix.

They were alarmed that he was where I found him, I asked if they can get a hold of someone in Gallup so they could take him home, she said she wasn’t sure if she could. In the meantime, I let the Cheii into my car, and we headed towards Gallup. He talked about how the boys he was with drink and that they abuse him. And he started talking about how he didn’t care if he died. 😢 I told him to not go with those boys ever again. He said they want to throw him in a nursing home, but he doesn’t let them, tells them he is happiest in his homeland, where he grew up. I told him, yes, and encouraged him to think positive about himself and keep his legs moving, stretch and pray for himself so he can achieve old age the way he deeply wants to, our Elders just miss the old ways.

It broke my heart hearing him speak. I would DO ANYTHING TO HAVE MY CHEII BACK, and it sickens me when people treat their elders like this. I tried arranging for him to take the Navajo Transit to Chinle but also felt bad about doing that because he might have got lost, he’s 85. And I didn’t know if someone would be there to pick him up in Chinle. -Hence, I reactivated my Messenger to try to contact people who may have suggestions. Luckily his family from Phoenix called back and said someone could pick him up at T&R. He was so relieved and told himself everything would be okay a few times as we started driving towards T&R. Throughout the whole time, we talked about the old times and compared it to nowadays. We talked about fake borders and how they divide people and how all of this land is DINÉ LAND and a few more subjects.

I got emotional a few times throughout our time together, but I didn’t let him see that (I kept thinking to myself about how many of our Elders are in situations like this). Earlier I asked him if he was hungry and he said he was and hadn’t eaten all day. So we got him some mutton ribs, potatoes and Loretta’s bread here at T&R and let him eat in my car. He enjoyed his ribs so much and kept saying thanks. His fam showed up, and as they were putting him in their ride, I told him to think positive about himself and to take care of himself, to keep a strong mentality. It seemed like the lady who picked him up was emotional as well. I will keep in contact with his family to encourage setting up home health care/caregiving for him and addressing the abuse he’s been receiving from his in law (the one who left him stranded). Elder ABUSE is one thing I CANNOT stand. 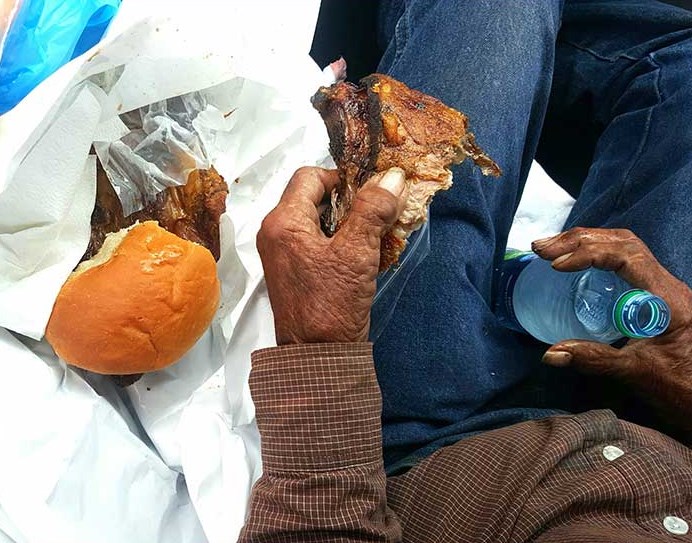 I would do anything to have my Cheii back and to take him out for a meal or to cruise with him. One of my Cheii’s greatest teachings was “If you see someone who needs help, YOU HELP THEM.” PLEASE, PLEASE, PLEASEEEE VALUE your Elders, they’re the smartest and valuable people in this Fake AmeriKkka that we live in, our precious backbone! This Cheii will always be in my prayers, such a precious/valuable person who has touched my heart. I’ll definitely pay him a visit in the future.