Mirella Ponce, who authorities said is a Tiny Rascal Gang member, was arrested during a routine traffic stop in Fresno.

The 20-year-old tatted woman was with her infant and two other TRG gang members were found in possession of a loaded stolen firearm during the stop.

She was arrested on two felony weapons charges, and one other passenger was busted for an unrelated felony. They were booked at Fresno County Jail.

The Fresno Police Department posted her mugshot, which quickly went viral, with people commenting away. 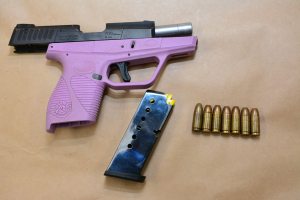 “The only crime she committed was stealing my heart,” one commenter wrote.

Other commenters went as far as offering to pay her bail, which is set at $100,000. “Ima just go bail her out. Free this hot gangster chick,” another wrote.

“How much the bail is I’ll pay it?” chimed in another.

Ponce is one of several “hot felons” who attracted attention on social media since Jeremy Meeks, now a model was arrested in California.