Home
In The News
Copycat Prankster, 36, Is Arrested Over Video Of Him Licking A Tub Of Ice-Cream And Putting It Back On The Shelf – Just Days After Teenager Did The Same In Notorious Footage

A 36-year-old man could face jail after he posted a video to Twitter showing him lick ice-cream straight from the tub before putting it back in the supermarket freezer.

Lenise Martin III, 36, has been charged with the unlawful posting of criminal activity for notoriety and publicity, and tampering with property, after filming a copycat video in a supermarket in Belle Rose, Louisiana.

It came just days after a video of a teenager licking the ice-cream out of a tub in another supermarket, before putting it back in the freezer, went viral. 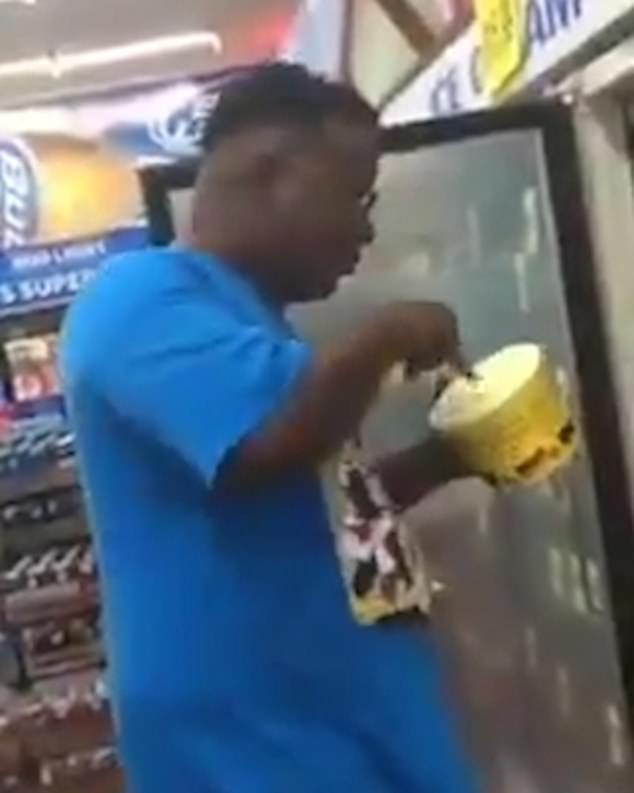 Lenise Martin III, 36, puts his finger in the tub of ice-cream while filming a copycat video in a supermarket in Belle Rose, Louisiana 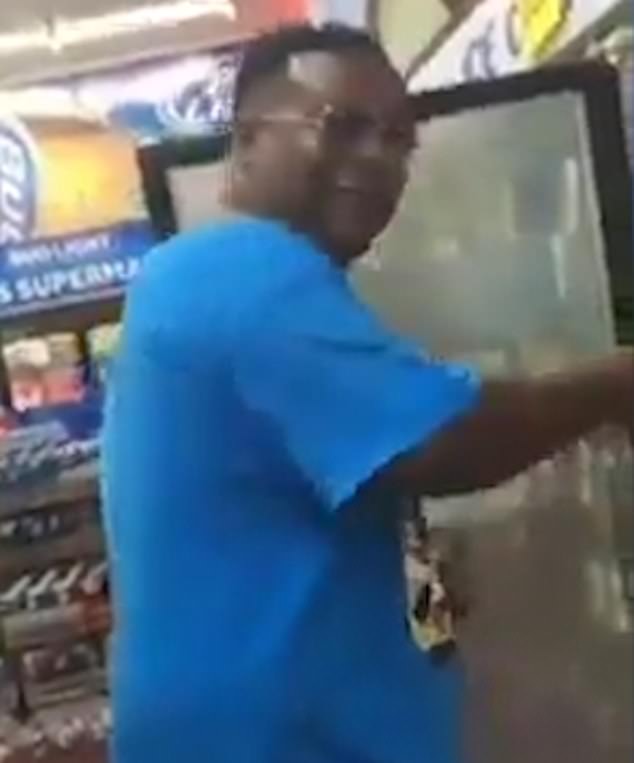 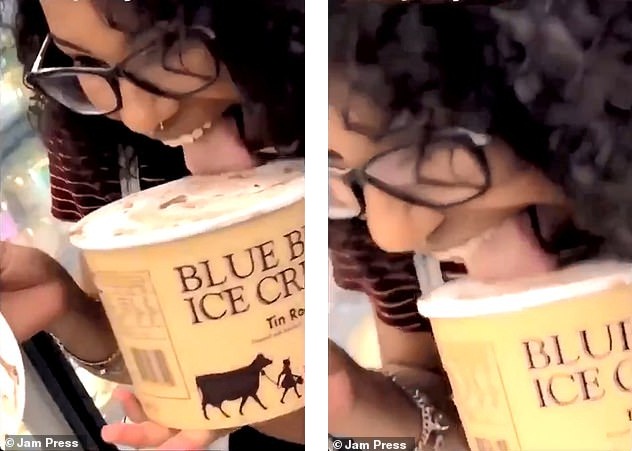 Encouraged by her friend, the woman is seen in the viral clip licking the entire surface of a tub of Blue Bell Ice Cream before placing it back into the freezer 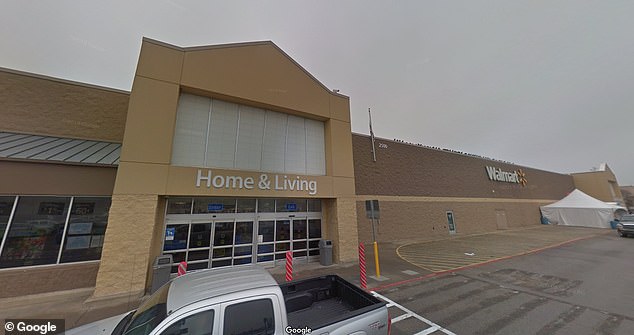 The Lufkin Police Department released a statement on Wednesday saying that they had identified the Walmart as being the one located on 2500 Daniel McCall Dr in Lufkin, Texas

The 37-second clip shows Mr. Martin holding a large tub of Blue Bell ice-cream before taking off the lid and licking the treat inside.

He then puts his finger in the ice-cream before licking it a second time, putting the lid back on, and placing it back on the freezer shelf.

When managers at the store became aware of the video he returned with a receipt to show he had actually paid for the tub ⁠— suggesting he did not actually leave it in the shop.

But he was still charged and is currently in jail awaiting a bond which will be set by a judge today.

A spokesman for the Assumption Parish Sheriff’s Office said: ‘It is illegal. It is a health risk to others. We will pursue anyone we see do this. You will be charged.’ 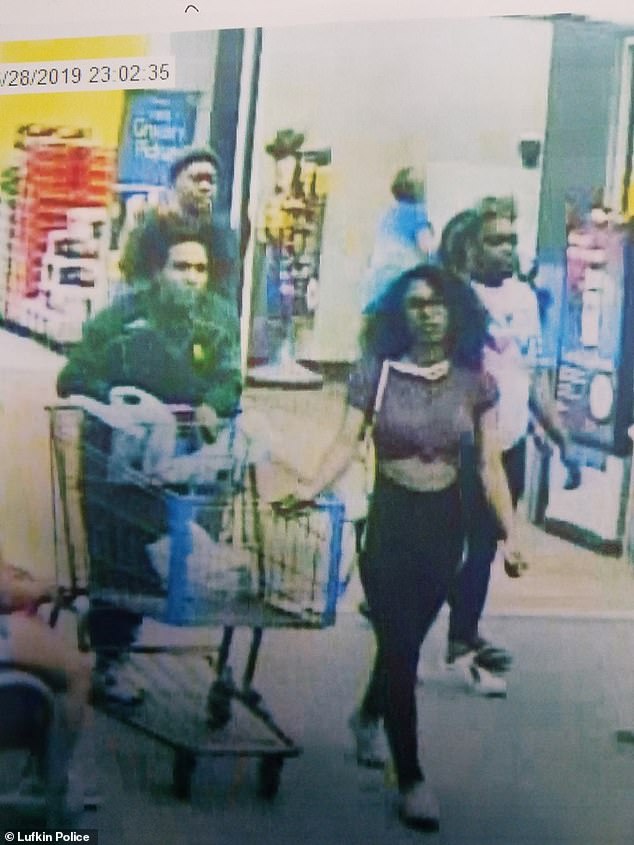 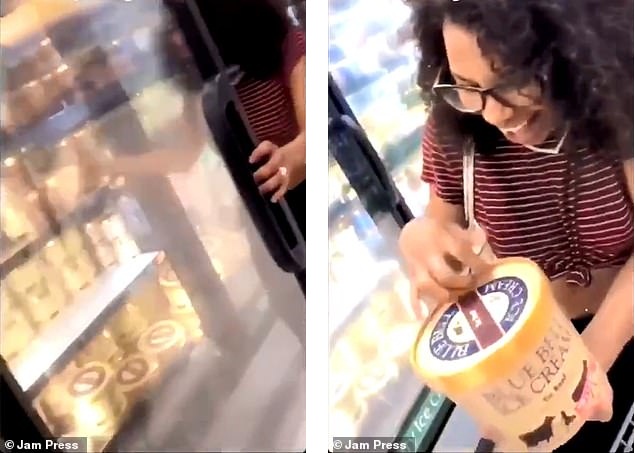 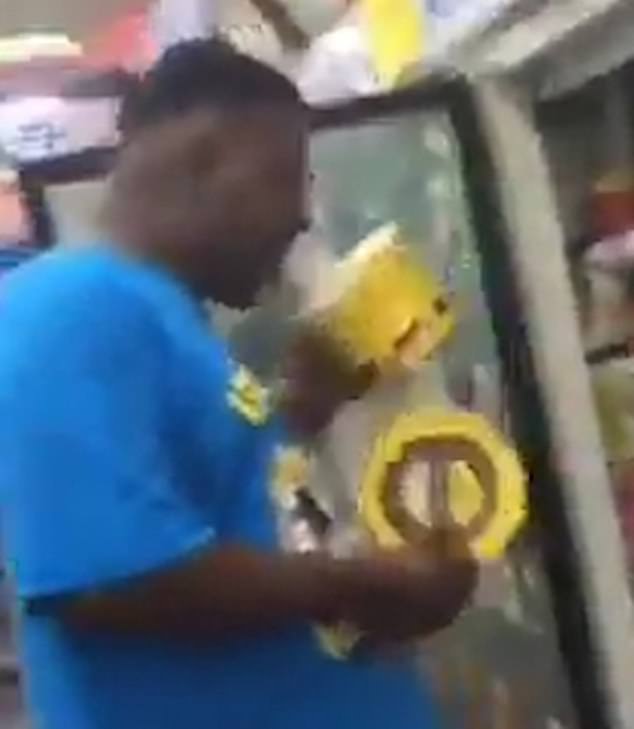 Any copycats will be dealt with ‘immediately and with the full extent of the law,’ the spokesman added.

Before the woman in Saturday’s video was identified as a minor she could have faced up to 20 years in prison after she posted the video showing her put the ice-cream back in the freezer.

In the clip the woman’s friend says: ‘Lick it, lick it. Ok put it back, put it back.’

The video, which was viewed more than 11 million times, was posted to Twitter on Saturday with the caption: ‘What kind of psychopathic behavior is this?’

Officers from the Lufkin Police Department refused to publicly name the girl because of her age, but they said they had no plans to charge her as an adult for tampering with a consumer product.

According to an update on the department’s Facebook page, the girl is tied to the Lufkin area through her boyfriend’s family.

Both the girl and her boyfriend, who filmed the stunt, were said to be forthcoming and cooperative with police, telling them what occurred and admitting to the act. 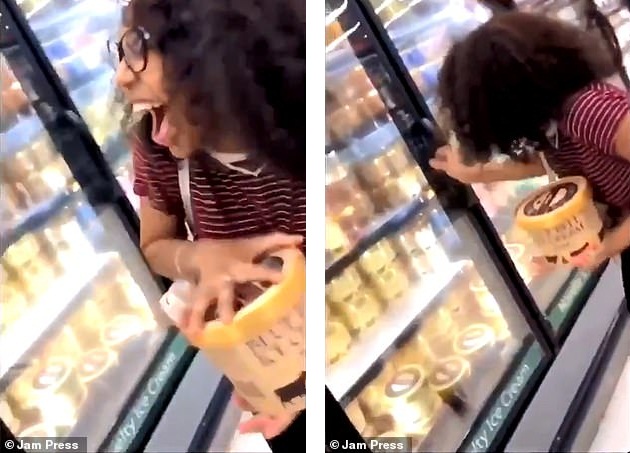 The video has gone viral, but it’s not known where the incident took place or when. The company says if anyone tampered with a lid, consumers would likely notice

Police say identifying the girl, to begin with, was particularly difficult as there were multiple people with the same screen name and appearances as her, along with a ‘catfish’ account impersonating her.

‘It was actually the catfish and NOT our suspect who bragged on Instagram about the incident saying: “Yeah, I really did that. You can call it Flu Bell ice cream now ‘cause I was a lil sick last week. Repost yourself doing this. Let’s see if we can start an epidemic (literally),’ the department revealed.

‘We do not intend to pursue charges against her as an “adult” and therefore what happens from here is at the discretion of the juvenile justice system.

‘We cannot speak for them as to what charge she will face in the juvenile justice system. As to whether her boyfriend will face charges, we are currently discussing his involvement with prosecutors.’

Officers released a statement on Wednesday saying that they had identified the Walmart as being the one located on 2500 Daniel McCall Dr in Lufkin, Texas.

Blue Bell contacted the police to notify them of the location, the department said in a Facebook post.

Detectives investigating the case were then able to secure video footage showing a woman who fit the suspect description on June 28 at approximately 11 pm.

‘Our biggest concern is consumer safety – in that regard, we are glad to see the tainted product off the shelves,’ Lufkin Director of Public Safety Gerald Williamson said.