An Oklahoma liquor store owner has caused some major controversy after a picture of its new door sign went viral.

Oklahoma City’s Midwest Wine & Spirits put the sign “Pull your pants up or don’t come in” up on its door, and employees say they stand behind that message.

According to employees, they know the sign will offend some people, but they want their customers to have some decency and respect other people who don’t want to see people’s underwear. 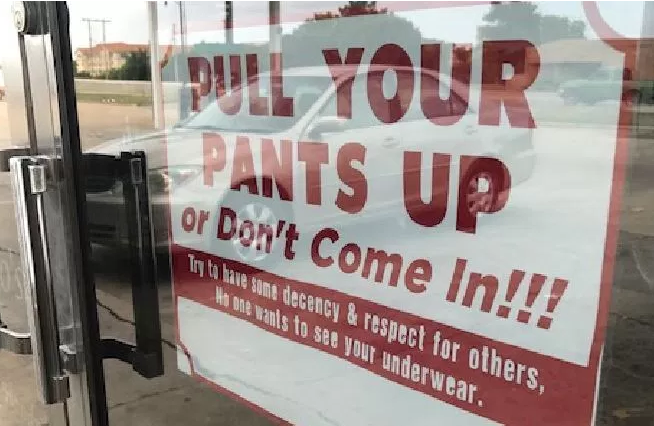 Shana Wissner is an employee at the liquor store and said it’s disgusting and they want their customers to act like adults.

She said it’s not just the matter of tackiness but also security issues. Wissner said sagging pants make it easier for people to steal bottles.

She also said if customers don’t like the idea or want to obey the rule set forth, they can do business somewhere else. Wissner said there are rules there and people need to follow them.

Chad Gilbert, who is a customer, agrees with it, saying he doesn’t’ want to see another person’s underwear. He understands it’s a fashion statement, but he finds it a little offensive.

Sunshine Weatherby is another liquor store, but she doesn’t agree with the sign. She said if it were a church and families came in, she might see the issue. However, it’s a liquor store, and there’s been much worse.

One reader said all businesses need to implement this policy because it’s indecent exposure.

Another reader also agreed that it was indecent exposure and used to be against the law, but all stores need to also implement it.

Another person said she loves the idea as well and hope that there’s no retaliation against the store, commenting that every store in the nation needs to do this.