A mom of two was forced to give birth to a huge tumor on the toilet after her “baby” turned out to be cancer.

Lauren Knowles was over the moon when her pregnancy test read positive. 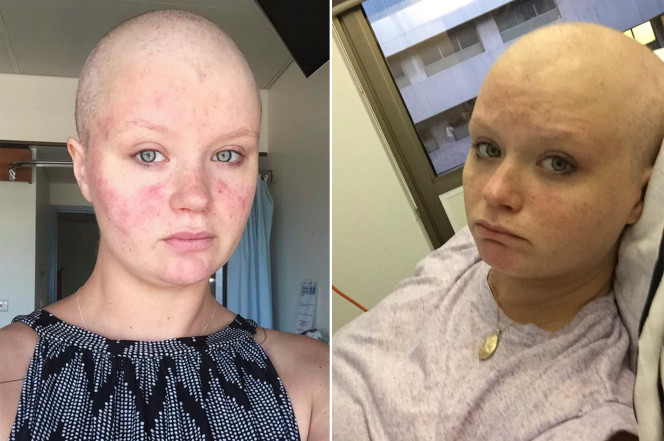 Lauren Knowles during treatment for her molar pregnancy.

But when the then-27-year-old noticed heavy spotting at seven-and-a-half weeks, doctors sent her for a scan.

The mom, who lived in the UK at the time, was heartbroken to discover the baby she thought she was carrying was actually a tumor growing in her womb.

She was diagnosed with a molar pregnancy, a cluster of cells known as gestational trophoblastic disease.

Despite surgeons removing most of the tumor and undergoing grueling chemotherapy and hair loss, Knowles’ tumor returned and continued to grow at an alarming rate.

Knowles started chemo straightaway, in a bid to keep her disease at bay.

But five months later, while she was in the hospital and suffering agonizing stomach cramps, she got the urge to push.

Moments later, she gave birth to her tumor, which was the size of a large pear. 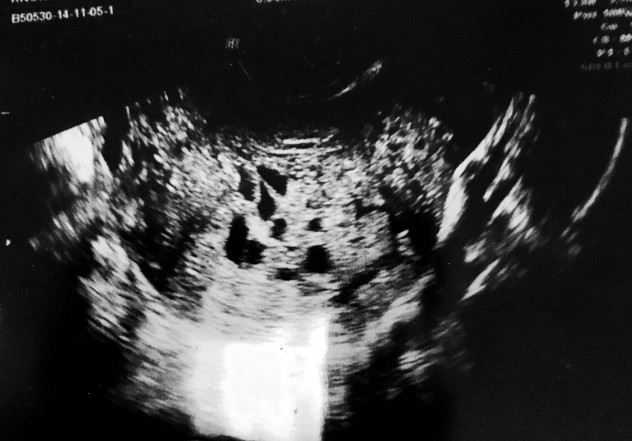 Knowles’ scan, which turned out to be gestational trophoblastic disease

Knowles, who now lives in Perth, Australia, said: “The tumor grew in my womb the same way a baby would, the same hormones were produced and my pregnancy tests always came back positive.”

“There was no way I thought it was cancer, but after I started bleeding, I had further tests when I was seven weeks pregnant.”

“I lost all my hair and five months after starting treatment, I gave birth to the mass in the toilet,” Knowles recalled. 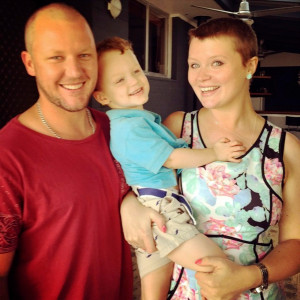 Knowles with her 5-year-old son Charlie and fiancé Trent

“It was the same size as a baby at 17 weeks, so it was a big tumor to push out with no assistance.”

“I was so relieved when I saw the tumor down the toilet as I knew my ordeal was finally over.”

Knowles, now 29, was warned by doctors she may struggle to conceive again after the tumor damaged her womb.

But she was delighted when she became pregnant with Indi, now 10 months, a year later.

“After all my treatment, the light at the end of the tunnel was falling pregnant with Indi,” she said.

The first sign something was wrong was heavy spotting, but having had the same thing when pregnant with her son Charlie, 5, Knowles wasn’t too worried. 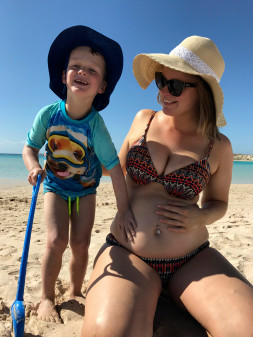 Knowles eventually became pregnant with her second child a year after her ordeal.

But it came as a huge shock to be told the baby she thought she was expecting was actually a tumor.

Knowles said she had never heard of a molar pregnancy before her ordeal.

“I didn’t even know what that was, so they gave me a fact sheet — as I was reading it, my heart just started to sink,” she said.

“My tumor was cancerous, so I started a low-dose chemotherapy treatment, but the tumor kept growing back.”

It was while pushing her son Charlie on the swings in the park that Knowles realized something was wrong.

“I looked down and saw there was blood everywhere,” she said. 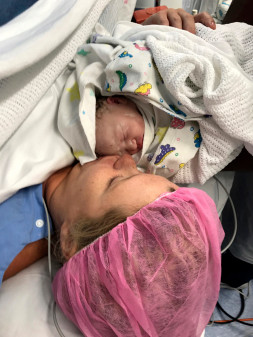 Knowles after the birth of her second child, Indi

She was rushed to the hospital and had six rounds of very-high-dose chemo, which caused her to lose her hair in a week.

After five months of treatment, Knowles’ health continued to deteriorate during April 2015.

It was then, after suffering severe cramps, that she ended up pushing out the mass on the toilet.

Knowles, a full-time mom, said: “I had a very strong pain in my stomach, so I got up and took my hospital drip to the toilet.”

“When I was sitting on the toilet, I felt myself having to push and it was very painful.”

“After the pain, I stood up and looked down the toilet and saw a massive dark mass in the pan.” 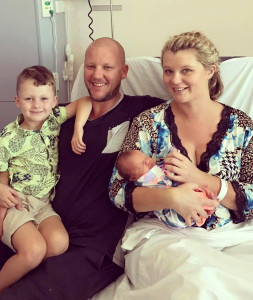 “A massive sense of relief came over me — I felt so thankful that the tumor was finally out of me.”

Scarred by her ordeal, while she was pregnant with Indi, Knowles was “terrified” she would have another molar pregnancy.

“I wasn’t able to enjoy the feeling of carrying her,” she said.

But at their first scan, Knowles’ sheer relief at hearing Indi’s strong heartbeat left her in floods of tears.

She added: “I want to give people hope that even in the worst scenarios, what seems impossible is still possible while raising more awareness to molar pregnancy.”