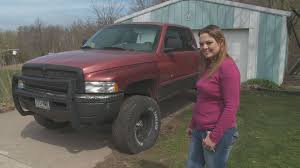 A Minnesota mother may actually be the “world’s meanest mom” after selling her 15-year-old daughter’s truck on Craigslist as a form of punishment.

Amy Adams posted the Craigslist ad on Tuesday because her daughter “decided that her grades don’t matter, that she can disrespect myself and her siblings on a daily basis, and that she has the right to skip school and run away from home.”

The ad listed the 1998 Dodge Ram truck for $2,750, and Adams said that she’s already gotten 400 responses. However, she qualified, “Over half of them were other parents saying, hey, high five.”

In the ad, Adams says she’s willing to sell the truck back to its original owner with a discount if they follow her request.

“If the person driving the truck on a daily basis will be attending North Branch high school next year, you will get a $300 discount. Why? Because I AM the World’s Meanest Mom, and would love for her to be reminded every day next year of all of the mistakes she made.”

The ad is as sarcastic as them come, and Adams says she doesn’t believe that parents should act like friends.

Adams believes her daughter’s friends apparently flagged the Craigslist ad, causing it to be removed. However, that didn’t stop Adam’s from re-posting it, all to have it flagged and removed once again.  While some people believe Adams may have gone too far, Adams said she recalls feeling the same way as a 15-year-old.

“To my mom, I was short tempered. I was snippy. And I was obnoxious,” Adams said. Adams said she believed her mother was at one point the “meanest mom in the world,” she added.

Adams hopes her daughter will one day understand why she did what she did. “I hope she realizes that it’s okay to discipline your kids. And it’s OK to have expectations. And it’s OK for them to have consequences,” said Adams.