It is said that when asked about how he created his statues, Auguste Rodin quoted the great Michelangelo: ’’Sculpture is easy — you just go down to the skin and stop.’’ That’s probably why a true masterpiece always seems like something divine: you look at it and think that only a genius could have seen such beauty in a simple chunk of stone. We are sure that each and every significant work of art has its unique story or mystery behind it, and we want to uncover them all. And today we’re going to share some of them with you. 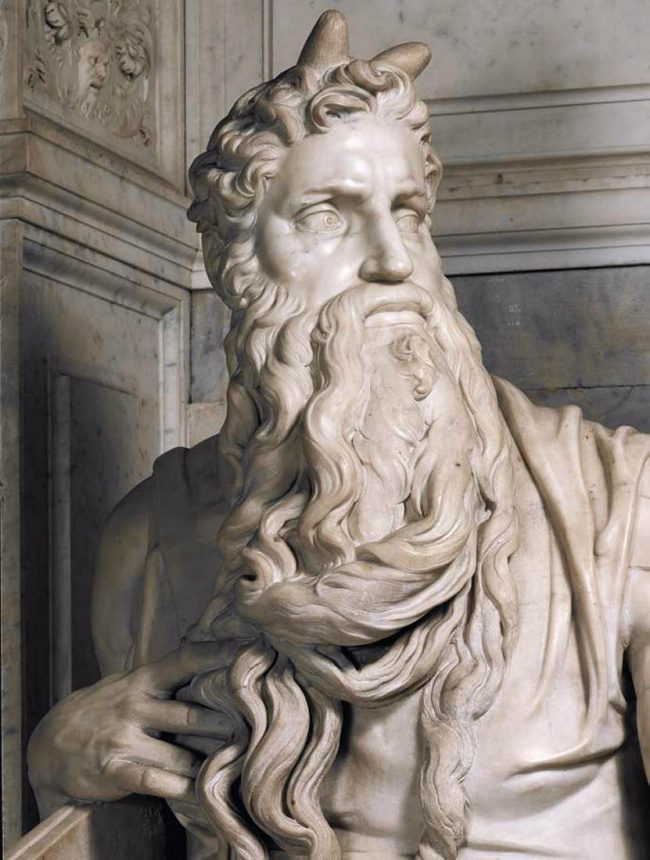 Michelangelo made a sculpture of Moses with a peculiar feature — a pair of horns. Many art historians explain it by his misinterpretation of the Bible: the Book of Exodus says that it was hard for the Jews to look at the face of Moses when he descended Mount Sinai with the Lord’s stone tablets. The Hebrew word used here in the Bible can be translated both as ’’radiance’’ and as ’’horns’’, but the context makes it pretty obvious that Moses’ face was exuding rays of light, and not horns. 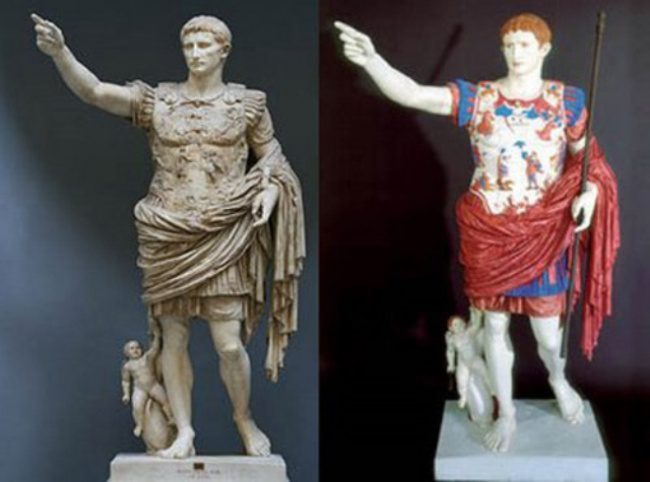 It was long thought that ancient Roman and Greek white marble statues were always plain white. But according to recent studies, they may have initially been painted in many different colors that dwindled over time, and finally disappeared completely due to exposure to light and wind.

The Suffering of the Little Mermaid 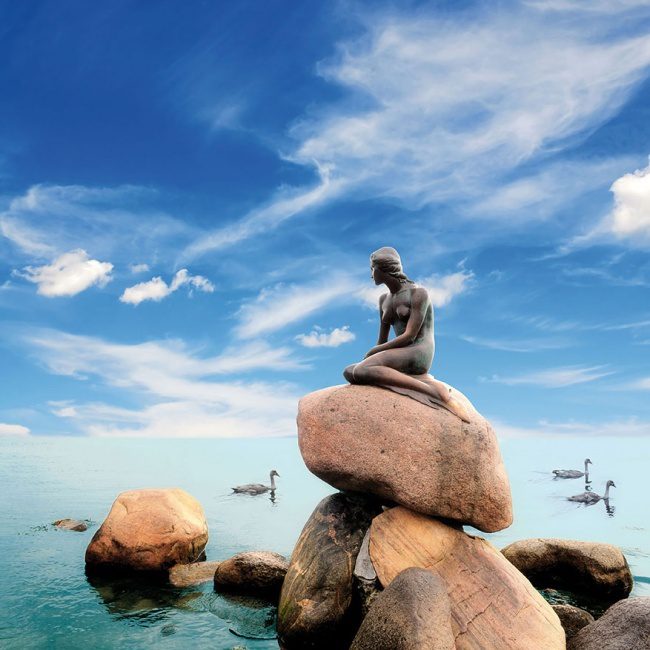 The Mermaid statue in Copenhagen is one of the most unfortunate sculptures in the world, being the favorite object of vandalism. Its history has many twists and turns. It was broken and sawn to pieces more than once, and even today you can find ’’scars’’ on the Mermaid’s neck that appeared when the statue’s head had to be replaced. The sculpture was beheaded twice — once in 1964, and the second time in 1998. In 1984, vandals cut off its right arm. On March 8, 2006, the poor mermaid was found with a dildo in its hand and splattered all over with green paint, while ’’March 8’’ was scratched on its back. Finally, in 2007, the town government proclaimed that the Little Mermaid may be moved farther into the harbor to prevent vandalism and constant attempts of tourists to climb on the statue.

The Kiss without a kiss 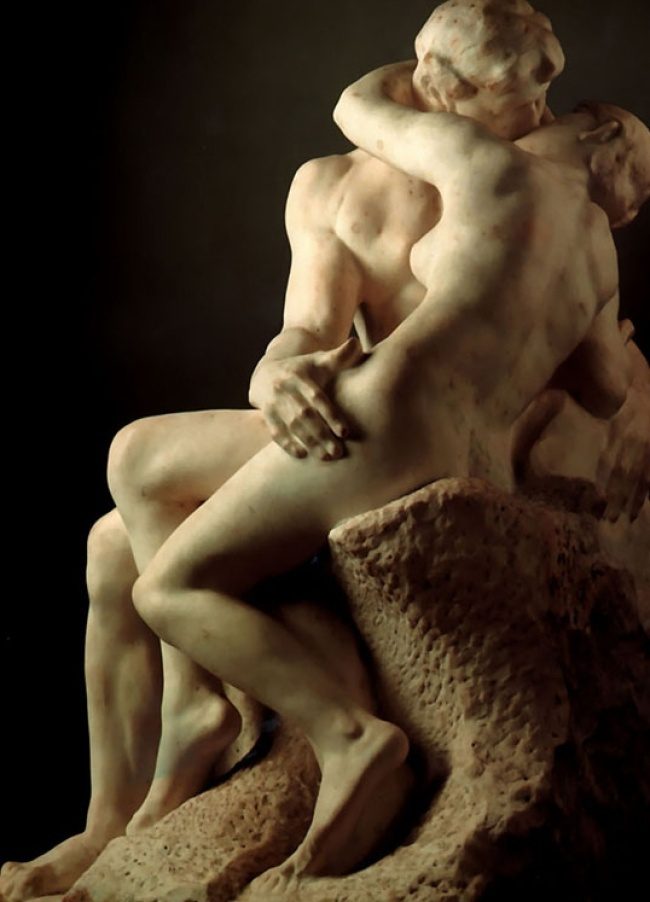 ’’The Kiss’’, the well-known masterpiece by Auguste Rodin, had originally been named ’’Francesca da Rimini’’, after a 13th century Italian noblewoman whose name was immortalized in Dante’s ’’Inferno’’ (Circle 2, Canto 5). The lady fell in love with her husband Giovanni Malatesta’s younger brother, Paolo, and they were reading the story of Lancelot and Guinevere when Giovanni found and killed them both. The sculpture shows Paolo holding a book in his hand. However, the lovers here do not touch each other’s lips, which gives us a hint that they were murdered without them committing a sin.

The more neutral title for the sculpture, ’’The Kiss’’, was given to it later by critics who saw it first in 1887.

The secret of the marble veil 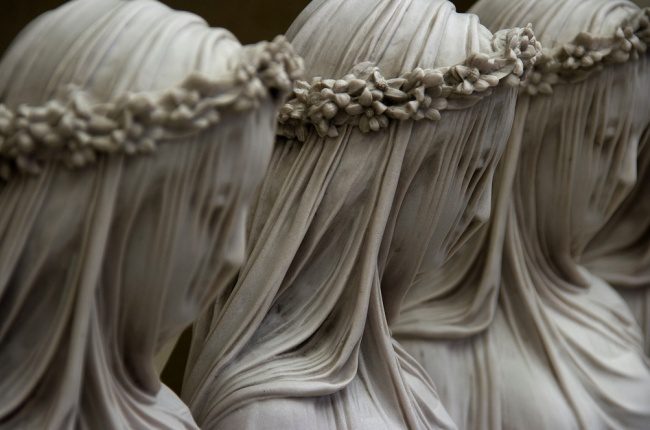 One look at these statues whose faces are covered by a semi-transparent veil makes you wonder how this could ever have been made with simple stone. And the secret of this is in the marble used for the work itself — in particular, its structure. The block that eventually became the sculpture had to have two layers, one of them more transparent, and one more thick than the other. Such stones are difficult to find, but they really do exist. The artisan had this idea on his mind, and he knew what to look for. Monti worked the marble, preserving the normal surface texture, while carving along the edge separating the solid part from the transparent one. As a result, the remains of the transparent part looked literally transparent, thus creating the veil effect.

The perfect David made of corrupt marble 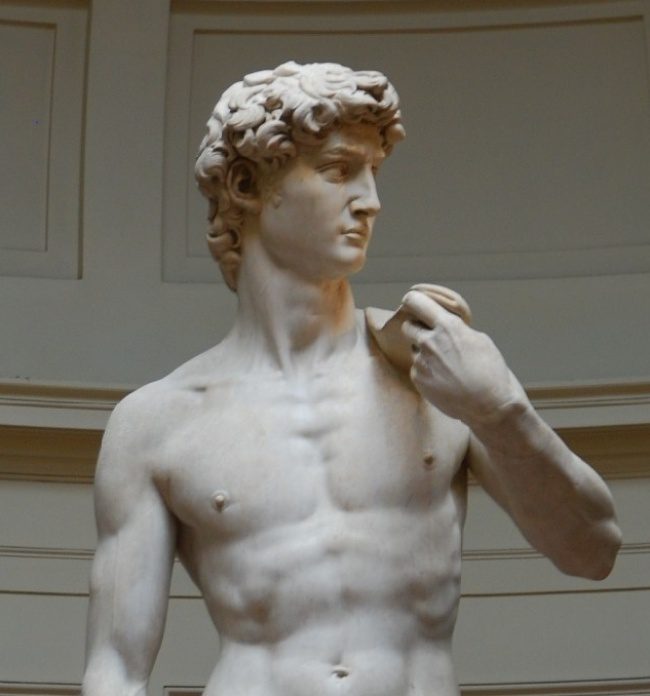 This famous statue of David was made by Michelangelo from a chunk of white marble left over from another sculptor, Agostino di Duccio, who tried to work with this piece, but quit after several unsuccessful attempts.
Although David has been considered the ideal of male beauty, it is in fact not so perfect after all. He is actually cross-eyed. This was discovered by Marc Levoy, a professor at Stanford University, who examined the statue through scanning it with a laser computer technology. The ’’eye defect’’ of this 16-feet sculpture is almost incomprehensible, as it is standing on a tall pedestal. The specialists think that Michelangelo made this imperfection on purpose so that David looked impeccable on both sides.

Death unto art, art unto death 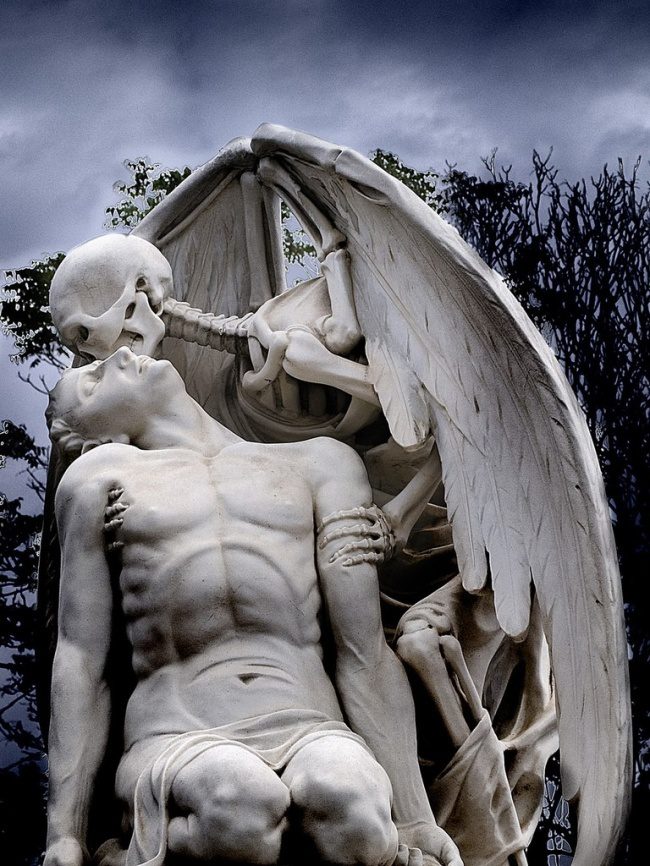 The most mysterious sculpture in the Poblenou cemetery in Barcelona is entitled ’’The Kiss of Death’’, its creator is still unknown. The statue is thought to have been made by Jaume Barba, but there is an alternative version of this story claiming that it was a work of Joan Fonbernat. The sculpture is situated in one of the farthest corners of the Poblenou cemetery, and it became the inspiration for Ingmar Bergman when he decided to make ’’The Seventh Seal’’, a movie about the fallen Knight and Death.

The arms of Venus de Milo 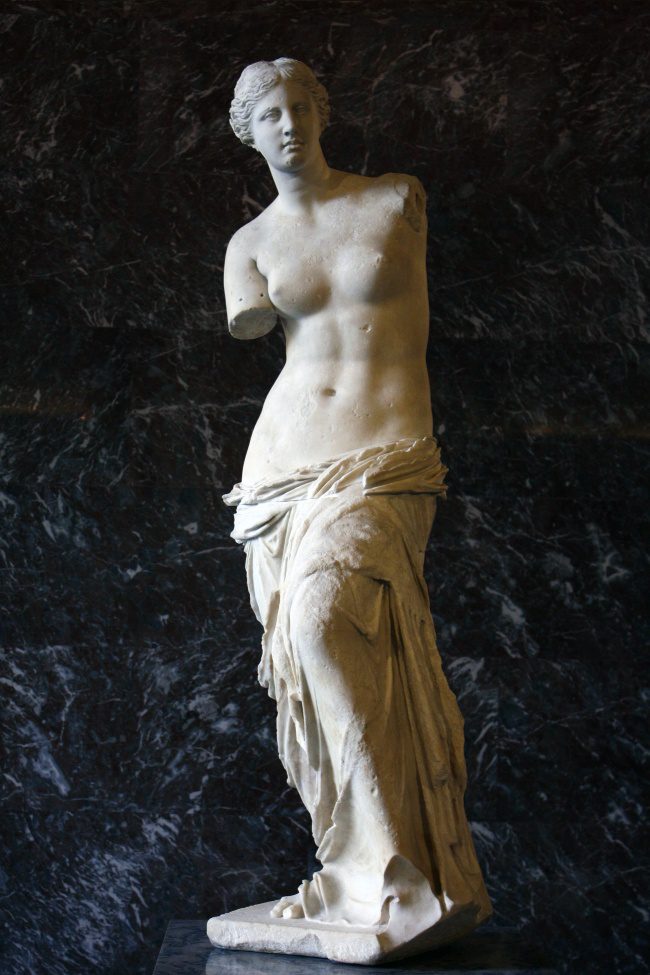 This statue of Venus is one of the best-known sculptures in the Louvre in Paris. A Greek peasant is said to have found it in 1820 on the isle of Milos. When discovered, the statue was broken into two large pieces, and in her left hand the goddess was carrying an apple, while her right was holding her dress from falling on the ground. When they saw it, some French navy officers, recognizing its historic value, ordered the marble statue to be taken from the island, but the people carrying it got into a quarrel while lifting the Venus over the rocks to the waiting ship, and both her hands broke off. Being utterly exhausted, the sailors refused to go back and look for the limbs.

The beautiful imperfection of the ’’Nike of Samothrace’’ 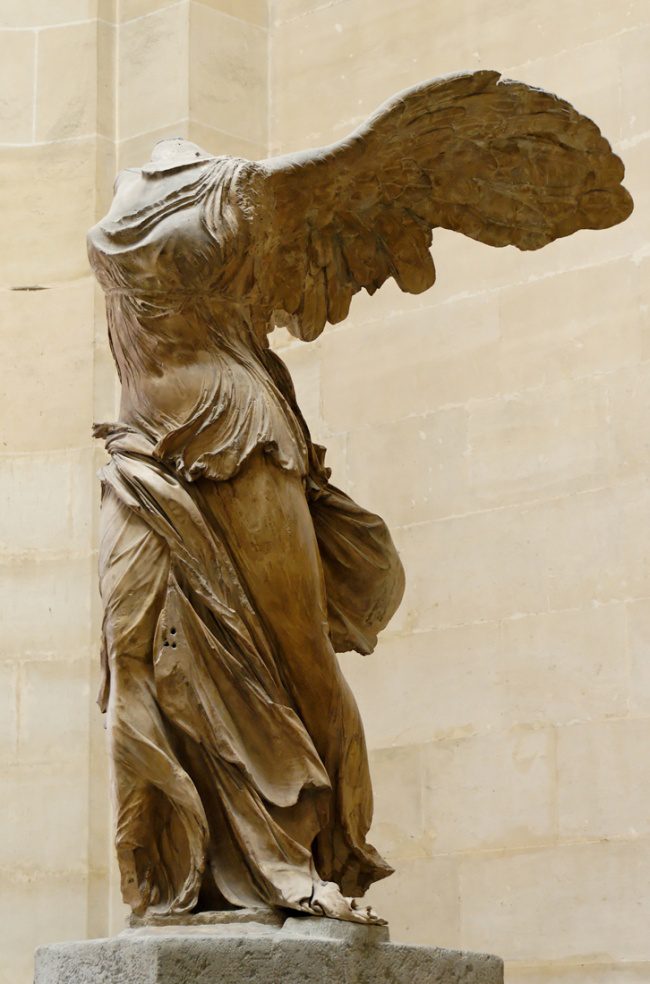 This majestic statue of Nike was found in 1863 on the island of Samothrace by the French consul and amateur archeologist Charles Champoiseau. The sculpture is made of golden Parian marble, and on the island it was the paragon of the sea gods’ altar. Scientists say that the Nike was created in the 2nd century B.C. to commemorate the naval victories of the Greek fleet. The arms and the head of the statue are lost, although there were numerous attempts to restore the original position of its limbs. The goddess’ right hand was supposedly raised in the air, holding a cup, a wreath, or a horn. But the interesting fact is that all the attempts to return the arms to Nike ended in failure — they just spoiled the masterpiece. And these failures make us recognize the simple truth: the Victory is beautiful as it is; her imperfection only adds to her majesty.