O’naturel – billed as the French capital’s first nudist restaurant – is the brainchild of twin businessmen Mike and Stephane Saada. It is located down a quiet side street in southwest Paris.

The former insurance salesmen, not nudists themselves, spotted a money-making opportunity in a country that enjoys a reputation as a top naturist holiday destination. 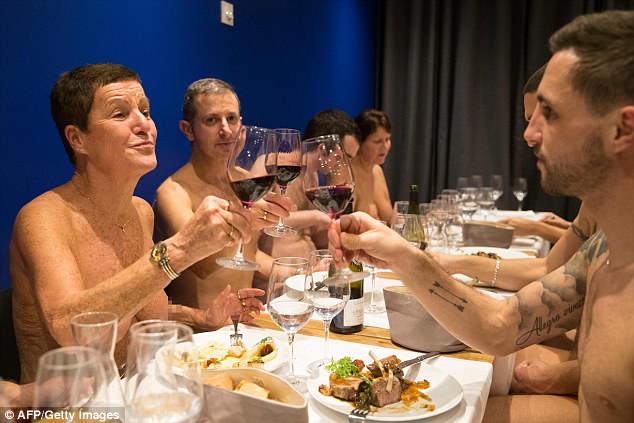 Coq au vin? A Paris restaurant has begun serving up classic French fare to diners in the nude. Located down a quiet side street in southwest Paris, O’naturel is billed as the French capital’s first nudist eatery 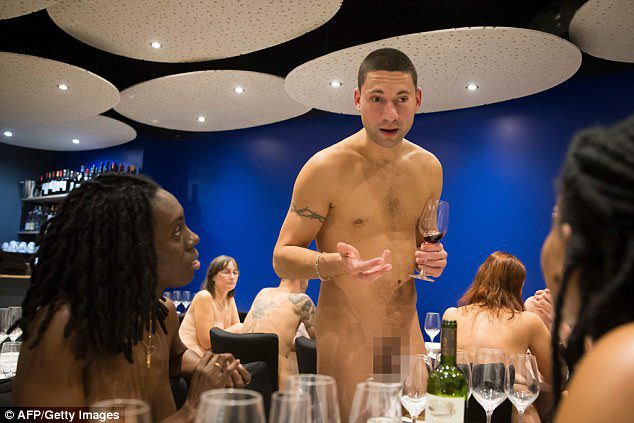 The restaurant is only open for dinner, strictly by reservation and guests are warned beforehand that it is a restaurant only and not somewhere for people to hook up

‘People only get to be nudists in the summer,’ said Stephane, 42.

O’naturel has a minimalist decor and a menu of upmarket French bistro cuisine, such as lobster, foie gras and snails with parsley cream sauce, at $57.50 for three courses.

The windows are shielded with a large white curtain. Clothes are left in the cloakroom along with mobile phones, to prevent people from sneaking a photo of their fellow customers. O’naturel is considerably warmer in November than the roughly 460 designated outdoor nudist spots around France, most of the beaches and campsites

The diners are provided with slippers to wear. Women, who make up 40 percent of the clientele, may keep their heels on. The black chair covers are discreetly changed between sittings.

In November, O’naturel is considerably warmer than the roughly 460 designated outdoor nudist spots around France. 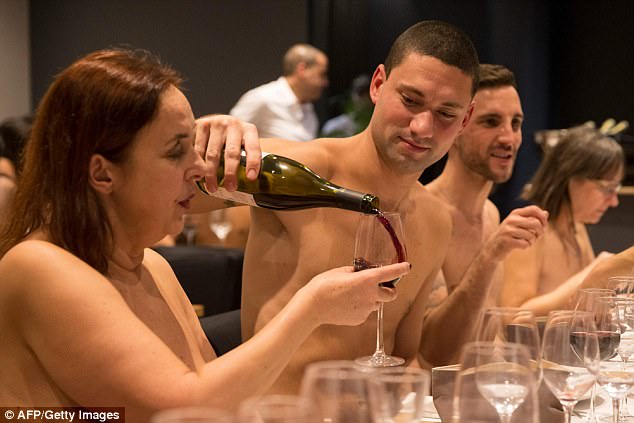 Yves Leclerc, the president of the French Naturist Federation, was thrilled at the idea of being able to strip off for dinner.

‘We’re in the heart of Paris and we’re eating naked. It’s a little surreal,’ he said, sitting at one of the restaurant’s 20 tables.

‘It’s like when we’re on holiday, but it’s even better,’ he said, lamenting that at home, in Leucate on the southwest coast, ‘I have to put my clothes on to go to a restaurant.’ 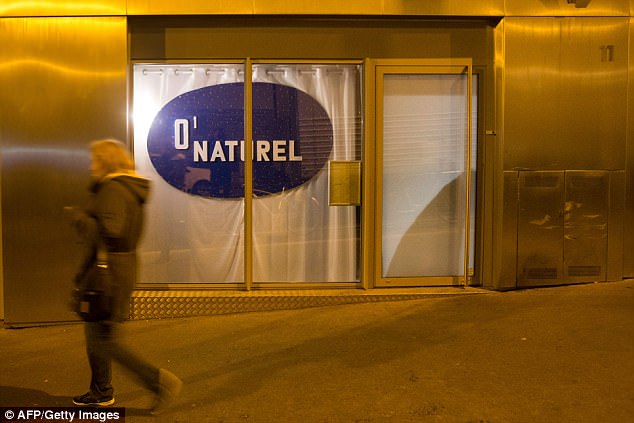 The restaurant opened its doors earlier this month, is the latest in a series of nude eateries to pop up around the world. Other nudist restaurants can be found in London, Melbourne and Tokyo.

‘Our role is to put people at ease,’ said Stephane.

‘As soon as they enter the dining room, we accompany them to their table and we reassure them that it’s not like the whole room is looking at them.’

The only fabric visible in the room is the tablecloths, the napkins and the clothes of the two managers who also serve as waiters. 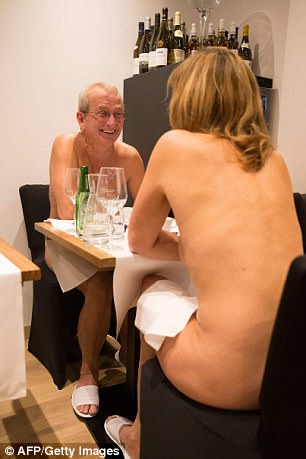 Clothes must be left in the cloakroom along with mobile phones, to prevent people from sneaking a photo of their fellow customers

The Saada brothers insist, under the law, they have to be dressed, unlike at nude London restaurant The Bunyadi where the staff are topless.

Alexandre, a 21-year-old firefighter, said he found the restaurant ‘serious and intimate.’

‘We are really with honest people here,’ he said. Before he walked in, he noted, a passerby had shouted: ‘Enjoy your naked dinner!’

Jimmy Denis, a 28-year-old soldier, admitted he was ‘a bit apprehensive’ ahead of the dinner, but later said he was grateful that the restaurant was warm.

‘I’m glad I worked out this morning,’ he joked.

The restaurant is only open for dinner by reservation.

Stephane said he and his brother try to stop ‘bad surprises’ from the wrong type of guest.

‘We might reject someone, or explain to them that if they’re looking to hook up, they should go somewhere else,’ he said. 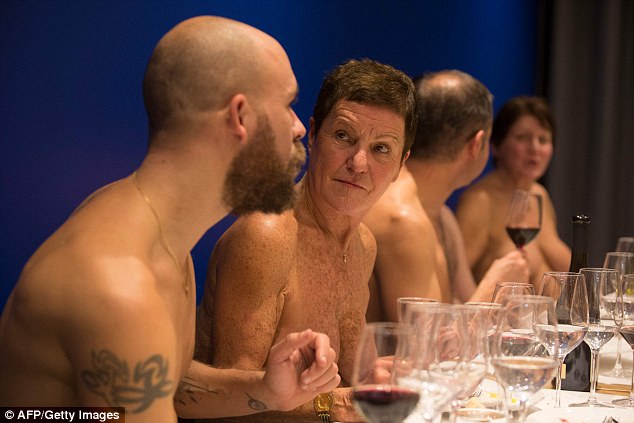 The only fabric visible in the room is the tablecloths, the napkins and the clothes of the two managers who also serve as waiters Dishes are classic French-inspired including lobster, foie gras, and snails

His brother Mike added: ‘Nudity doesn’t have to mean sexuality.’

Many in a country used to nudity might shrug at the idea of enjoying a plate of scallops while naked and the restaurant has raised eyebrows among some neighbors who note it is next to a creche.

‘I’ve got nothing against nudism on the beach,’ said Donatella Charter, a 42-year-old interpreter. ‘But eating in the buff with other people, I don’t get it.’