Pizza Pizza promises its customers will get their food “in 20 minutes or less.” Nadisha Mendes got something a little more than that after a midnight pizza delivery.

Mendes said she is used to fast food deliveries, and usually calls Customer Service to ensure the order has gone through. The restaurant promises a free pizza if it takes more than 40 minutes to get their food. The delivery driver was four minutes late. She called Customer Service and had him speak with the Customer Service Department, and they told him the pizza is free.

After the delivery driver left, the women received a barrage of messages from him about how they strategized to get the free pizza.

He said maybe she needed to spend time learning how to pick up the cell phone instead of plotting how to get free pizza. He told her that she was cheating small businesses who are trying to make a living and the driver said he had called her three times before the time it was due to be delivered and she lied to entire time to get free pizza. 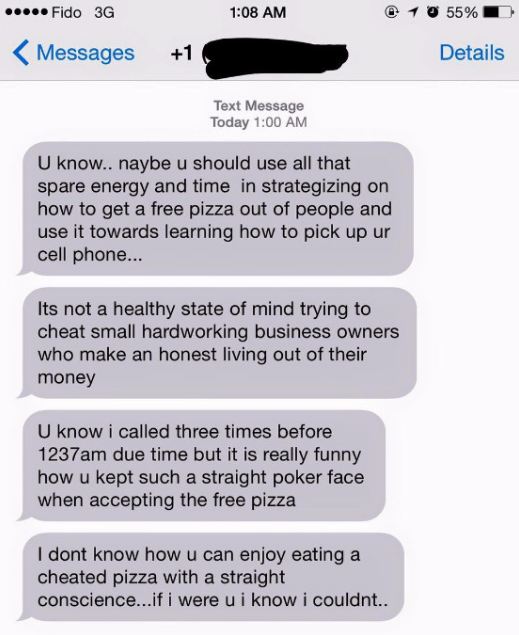 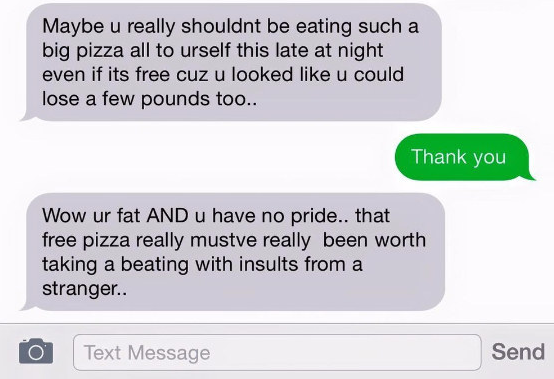 He went on to insult her by saying she could lose some weight.

She replied, “Thank you.”

The delivery driver said the Mendes had no pride in herself.

After the ordeal, Mendes said she felt attacked and would have paid for the pizza, but this was a total breach of trust.

Sakti Hasna, District Sales Manager for Pizza Pizza, said the pizza delivery driver was new but no longer employed with the company. He also said he was a good guy who made a terrible decision.

Mendes said good guys don’t do stuff like that. She canceled her account with Pizza Pizza and is still concerned about possible retaliation from the driver.