Anybody who lives near the ocean has seen or heard of the creatures in the briny depths of the sea.  However, there are hidden dangers lurking just below the surface.

When you’re in the water, look out for some of these creatures!

Don’t let the name fool you — these “shrimp” are some of the largest and toughest customers in the ocean. Their clubs are so powerful, they can punch so hard that they can break typical aquarium glass. 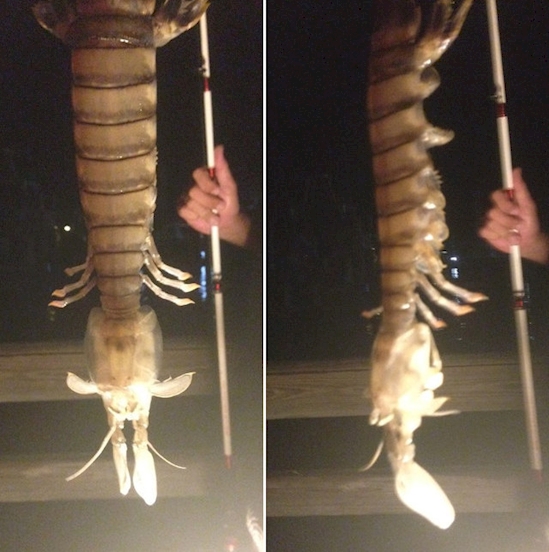 The swordfish is not known to attack people unprovoked.  If you threaten the swordfish he won’t hesitate to put his namesake bill to use, as one did to a fisherman in Hawaii in 2015, killing him. Stingrays although they tend to be lazy creatures, when they’re in danger they will protect themselves with a stinger on their tail that is armed with a deadly venom. 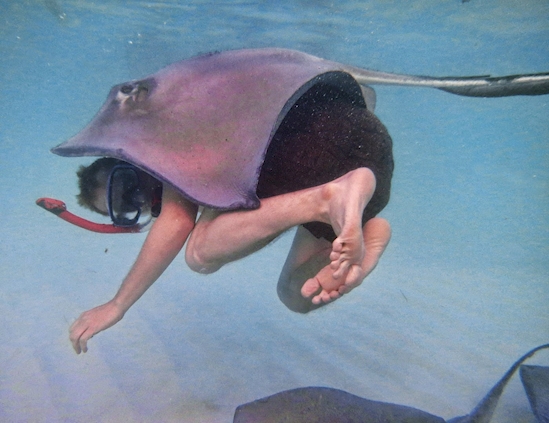 In and around Japan, Nomura’s jellyfish are huge, larger in diameter than a grown man is tall, and weigh about 400 pounds, with a mass of venomous tentacles! 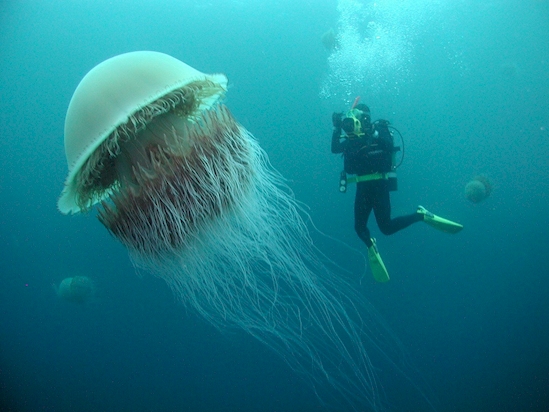 Some crocodiles can grow up to 20 feet long and weigh 2,000 pounds. Their powerful jaws and rows of jagged teeth,  keep most people out of the water. 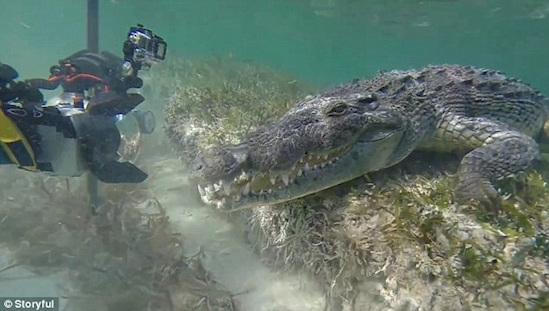 This is the largest species of octopus in the world.  The Giant Pacific octopus and can stretch its’ tentacles out up to 20 feet, while he camouflages itself to blend in with its surroundings. You don’t want to get one of those tentacles wrapped around your ankle! 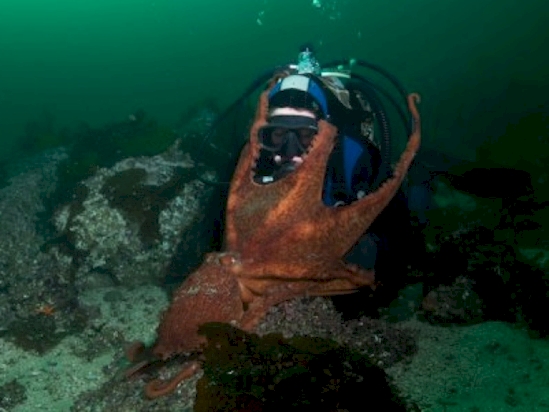 Basking sharks normally eat plankton.  But, you still have to respect a 40-foot shark that weighs more than five tons and has a ridiculously huge mouth! Humpbacks are known for their incredible aerial displays when they breach the surface But as this boater discovered, it’s not all fun and games when you get too close to a 30 ton of whale. 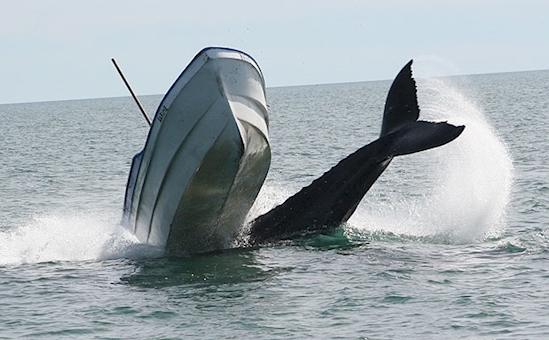 Of course, no list of ocean-based dangers would be complete without a mention of the Great White Shark.  Unlike the larger basking sharks, Great Whites love meat and are known to attack humans on the average, five to 10 times a year. 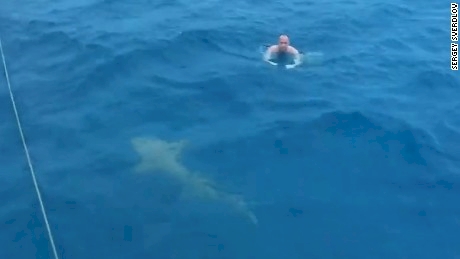 Pro surfer Mick Fanning was lucky to escape without injury after a shark attacked him during a competition being broadcast live on TV.

At the event in South Africa, Fanning punched the shark in the back before scrambling onto a jet ski. The Whale Shark is largest fish of them all and normally feasts on plankton, just like the basking shark. 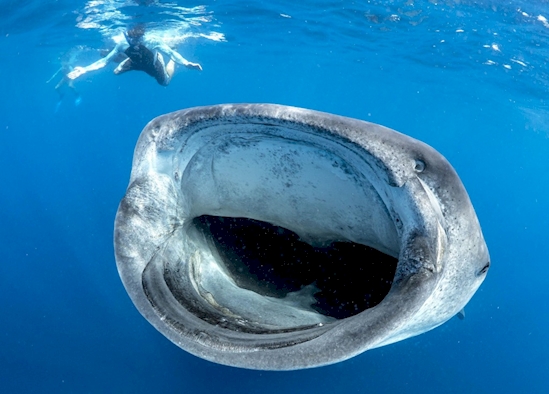 Not much is known about these elusive creatures, but the largest ever found was the size of a bus!  Considering their deep ocean habitat, the terror of being hauled into the blackness of the depths make giant squids the subjects of some compelling nightmares. 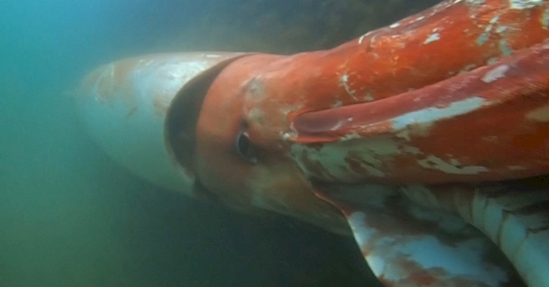 Native to South America, the anaconda is one of the longest, heaviest snakes in the world.   These massive snakes are at home underwater.  You don’t have to worry about venom with anacondas, they just wrap their prey with their huge bodies and squeeze.  You’ll either die by them cutting off blood to the brain or drowning. 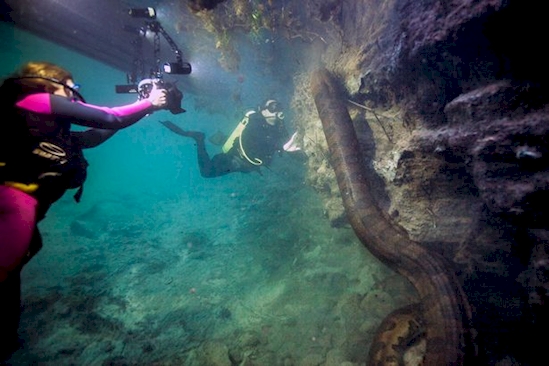 It’s unclear what species this giant snake was, but considering the picture was taken from a plane, it’s safe to say you don’t want to be in the water with it. We’re not talking about the seaweed you find in sushi.  This seaweed is the type that divers have been known to get tangled in and drown. 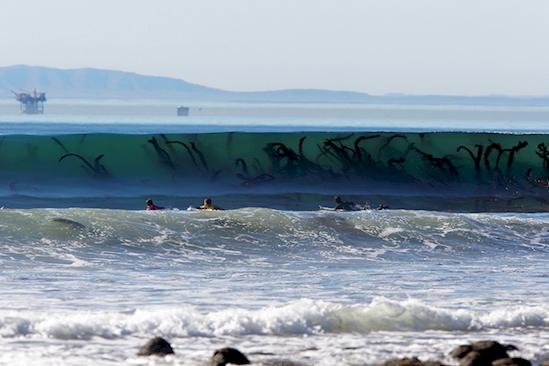