Mary Garrison Minyard, an editor of the Marshall County Daily Online, learned terrible news while at the still-active scene at a western Kentucky high school. Minyard, a local newswoman discovered the 15-year-old boy who had allegedly shot and killed two classmates was her own son. 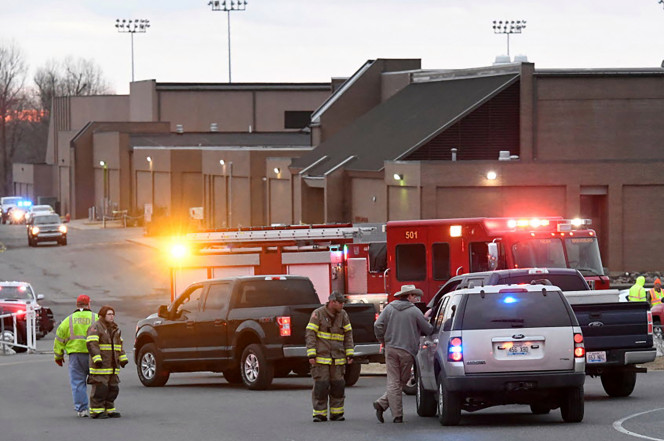 Police investigators are seen at the scene of a shooting at Marshall County High School in Benton, Kentucky.

It was only after she arrived that she learned the identity of the handgun-wielding suspect. Gabe Parker, a sophomore at the school, was taken into custody at the scene is Minyard’s son.

He was initially been charged as a juvenile with two counts of murder and 12 counts of assault for the students who survived being shot. HIe is currently being held in a juvenile jail a half hour from the school.

Assistant County Attorney Jason Darnall will seek to prosecute Parker as an adult. Minyard, divorced Parker’s father when the boy was 5 years old. She has declined to comment.

Officials have not commented on what motivated Parker to allegedly open fire just before 8 a.m., as students arrived for school.

There are few details about Parker in the close-knit town of just 4,500 residents, but he was seen as a shy, quiet red-head who loved fishing with his grandparents.

“Anything Grandma needed, he would get,” said neighbor Allyn Hornick.

When she spoke to Parker at his grandparents’ house, he seemed anxious about school and a little depressed, Hornick said.

Classmates are stunned he’s the suspect.

Classmate Ashley Collie, 15, said “He kept to himself, and seemed “like a really good kid.”

Collie said recently, though, he’d begun talking about violence and had an interest in joining the Mafia.

Parker played the trombone for the school marching band, and was well-liked by bandmates, said Jayson Roberts, whose son is a classmate.

Friends said they noticed a change in Parker after Christmas break. He was “snappy,” or short-tempered, Roberts said.

At the school, he was allegedly leveling his handgun to kill.

First responders said several of his victims suffered gunshot wounds to the head.