Britain’s most pampered pooch is celebrating Christmas in the lap of luxury with 68 individually wrapped presents costing in excess of a £1,000.

Mother-of-one Helena Mueller, 38, from Cambridgeshire loves her Cockapoo, Lola, more than anything in the world and devotes her life to making sure that her dog wants for nothing.

On the big day itself, Lola will unwrap her 68 gifts, which include premium toys and clothes – and a special doggy Christmas roast – and she and her owner will wear matching Christmas jumpers.

Helena admits that Lola, who has her very own bank account and £100 monthly allowance from her husband Mark, will be getting more presents than her six-year-old son Harry because she ‘loves Lola more’.

‘This year, she’s definitely getting more gifts than Harry,’ she admitted. ‘I tried to hide that from Harry last year, but this time it’s so obvious because there’s so many.’

She added: ‘I do love my Lola more than Harry. You know, Lola never moans about homework, and she never complains about what’s for dinner.

‘She had her first snow yesterday, and I came in and realized I hadn’t taken any pictures of Harry – but had absolutely loads of Lola, and that’s what always happens.’ 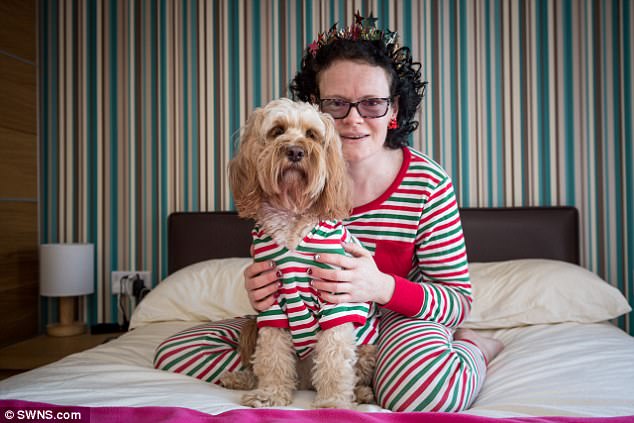 Helena Muller is obsessed with her dog Lola, a Cockapoo that she spoils with toys, food and matching clothes 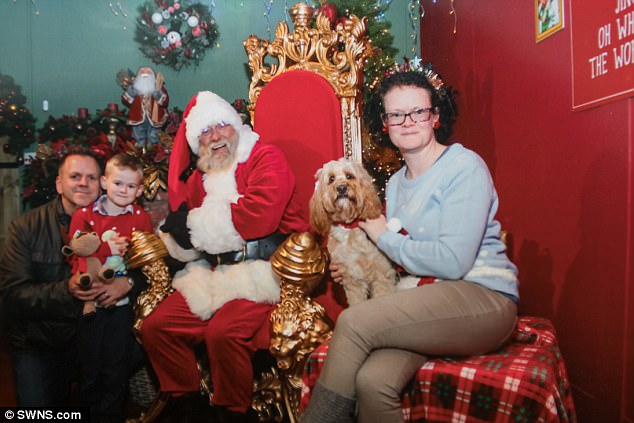 The mother-of-one admits that she has bought more presents for her dog than her six-year-old son Harry, pictured with Helena and his father and her husband Mark meeting Santa 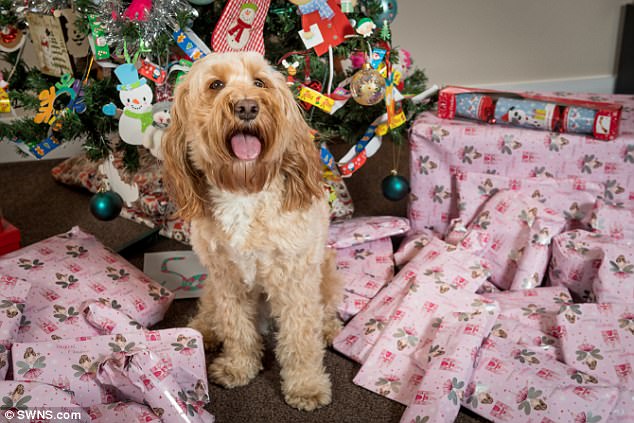 Helena has even learned how to groom Lola herself and spends around £150 a month on the latest shampoos and special aftercare. The dog fanatic has also launched her own dog grooming business called Lola’s Parlour.

She said of customers interested in bringing their own dogs to Helena: ‘People say, “Our only worry of giving our dog to you is, will we get it back?” because they know just how much I love my Lola

Lola eats a special raw diet and Helena has to order her food once a month from their favorite pet shop: ‘They have named Lola ‘Lady Lola’ as they know how spoilt she is and how she’s treated.

‘In fact, we make an outing of it when we go there – they make me a cup of tea, Harry plays in the sand they have there.’

Helena said of getting Lola: ‘She’s changed my life so much, we got her because I have an only child, Harry, who was four at the time.’

Lola was eight weeks old in September 2015 when they first got her and since then Helena hasn’t looked back, bringing her pooch everywhere – even on dates with her husband.

‘We do everything together, she comes running with me and absolutely everything!

Helena has bought a special seat for Lola from the US so they can go out on bike rides together in the summer, and if the ground gets too hot when out on walkies the mother-of-one has a special buggy just in case. 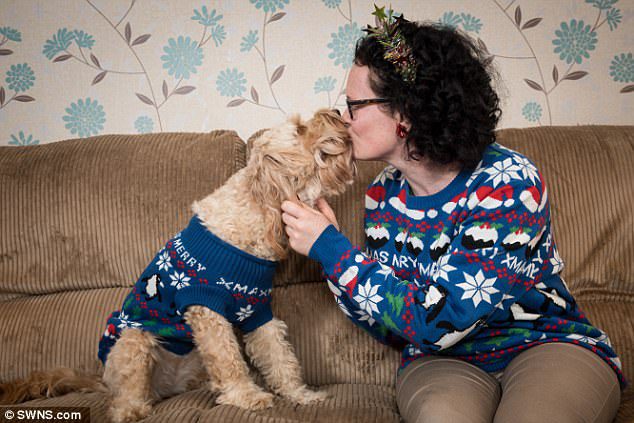 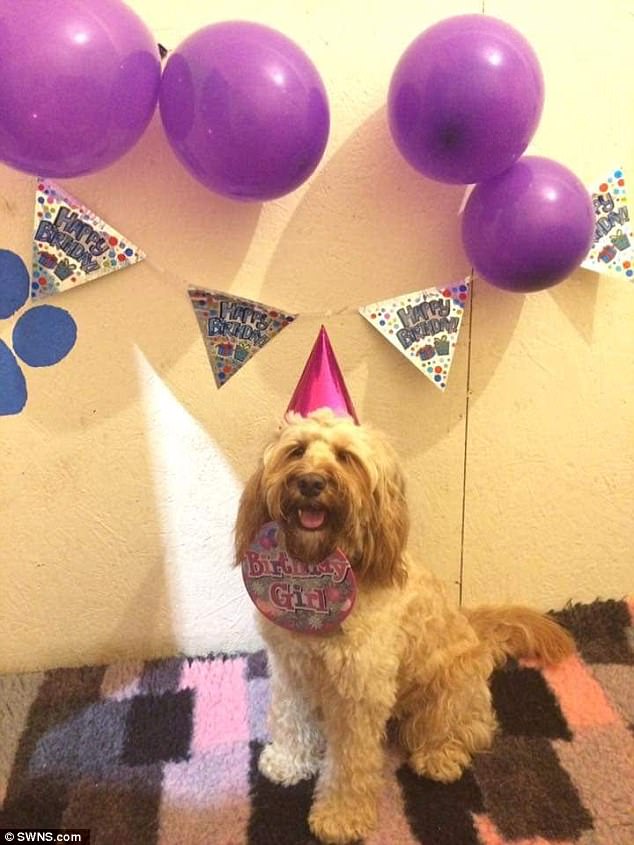 Lola is accustomed to a luxurious lifestyle, with Helena treating her like a princess splashing out on gifts and treats Helena has set up her own grooming salon in her home, especially for Lola that she also plans to open up as a business 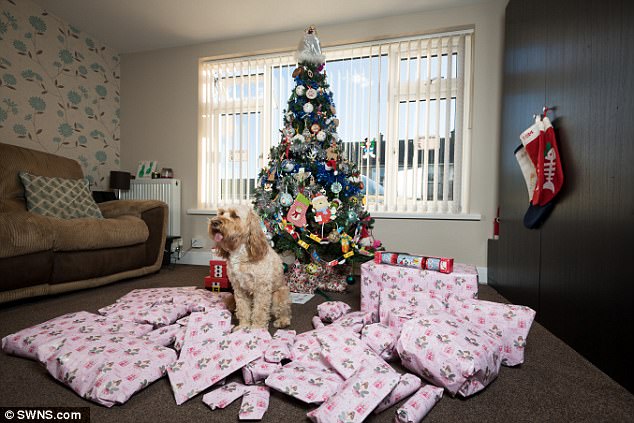 ‘Yes I am obsessive, I don’t disturb her if she’s asleep – like if she’s cuddled up on me on the sofa and I want something, I call Mark and make him get it.

‘She came on a family trip to the cinema last week and it was brilliant – my husband wasn’t expecting her but I couldn’t leave her at home!

‘So she came along wearing pajamas matching mine, we have matching jackets too. Lola has a full wardrobe of matching clothes with Helena, that they wear out together on bike rides and dog walks 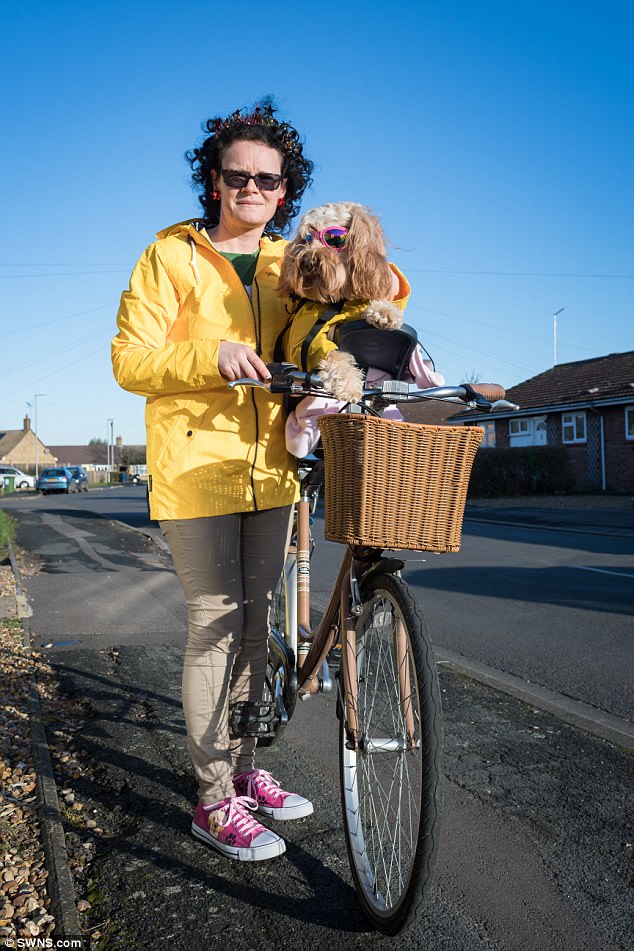 For Lola’s birthday, Helena had a custom dog cake made so that the pooch could enjoy her special day Helena doesn’t like to disturb Lola when she’s sleeping, the dog even has her own bed and blanket

‘I took a week off from work when Lola had her spaying operation when Harry has a cold I’m just like, “Off you go then!”‘

Helena said: ‘My husband’s view is a happy wife, happy life – he knows where he comes in the pecking order – it goes Lola, Harry, him!

‘He’s agreed to Lola’s separate bank account and her allowance of £100 a month for any bits she needs. I’d say we can think about increasing her allowance.’

When Helena, heads off to her job in insurance, she packs her pooch off to a creche service where Lola gets to boast to other dogs about her luxurious life.

She said: ‘She goes to creche for half a day a week, so she can meet other dogs.’

Helena explained how she took Harry out of school to go to a special dog photographer so that they could have a family photo with Lola. The cockapoo enjoys trips out to the park with Helena, who admits she takes hundreds of photos of

‘I would rather that Harry wasn’t able to spell “table” when he’s 20 than have a gap in the family photo,’ Helena reasoned.

Lola is so pampered that she will only eat out of one of her many pink fancy princess bowls.

‘Some mornings if Lola isn’t interested in her breakfast I will sit on the kitchen floor and spoon feed her to make sure she’s eaten as I hate to think of her being hungry while I’m out!’

There’s also a cooling personalized water spray for hot days with Lola’s name on it, and her special raw food gourmet diet.