I was pulled over Wednesday morning by a TN State Trooper. When he came up to the car, he asked ‘Why are the two boys in the back seat not in car seats?’ My answer was the two little boys were my foster sons who I had just got the night before. I showed him paperwork and explained to him that when I got them they had the clothes they were wearing and that is about it. No car seat, no toys, no coats, and so on. He was very nice to the kids and to me. He asked me for my phone number. I gave it to him. His wife called me and asked about the boys. This morning Officer Tidwell met me in Waverly, he and his wife had purchased gifts for the boys. Not just the two boys in the back seat but, their older brother too.

I cannot thank him enough for the kindness he has shown these three boys. I never asked him for anything. He and his wife acted out of the kindness of their hearts. He showed these boys that there are very nice cops out there and I hope he has left a lasting impression on them that cops are good. The boys have been telling everyone that ‘cops are nice.’ He has made their day. You hear way too much negative stuff now days so, here is some good news for you all.” 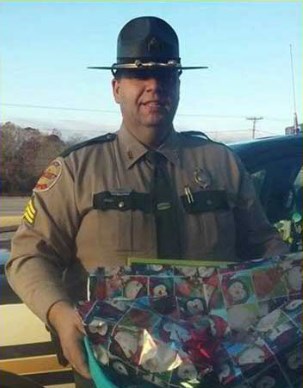