Home
Animals
Man Lets A Very Special Friend Come And Stay In His Home. This Is Horrifying

“I’m sorry, but I just have to tell someone – anyone who will listen about the guy who has recently moved in with us…

“So, we live in a 2 bedroom apartment, and the other room is just a spare one we would use for when friends came around, so it’s mostly going to waste. My girlfriend’s parents were quite lonely after their children left the house and had enough money to retire young so they decided to adopt. Phil’s mother abandoned him after birth, and the father was nowhere to be seen. He had lived with my in-laws his whole life, and they honestly gave him everything he could ever want. He seemed really great to be honest. I’d met him twice before when we went to visit, and he was really friendly. The only weird thing was that both times I’d met him he had a black eye, but I didn’t know him well enough to ask him about it, and he was kind of a quiet guy anyway, so it didn’t feel right to intrude.

“Cut to a few weeks ago, something happened, and Phil couldn’t stay with my girlfriend’s parents anymore. He really needed somewhere to stay since he couldn’t pay rent because he didn’t have a job. We spoke about it and agreed that we have the spare room, and since he was a huge part of her parent’s life, he could stay with us for a bit.

“The first week went by without incident, and I was working a lot, so I wasn’t home much. But then I had a week off, and it was then I started to notice some weird things about this guy. The first being that he hadn’t showered or taken a bath since he’d gotten here. I didn’t want to be rude, but I could notice that he was starting to stink a little bit. I came up with the brilliant idea to show him the new shower head we bought that has different settings like massage and pulse (can’t help but feel this purchase was more for my girlfriend than me) so I said, “Hey, come see this for a second, I have something cool to show you.”
“As I got into the shower room I turned around and noticed that he wouldn’t come in. He just stood in the doorway staring at me with this stupid impression on his face. I turned the shower on to try and show him the different settings and he just freaking walked away and into his room. Alright, I did think it was a bit weird, but everyone’s different, right?

“The next day I come into the kitchen to get my lunch ready for work and the floor near the sink is a bit wet. It was hard to tell because the floor is wooden and the lighting isn’t great in our kitchen, but I could have sworn it looked like pee. I cleaned it up anyway and brought it up with my girlfriend after I finished work. She said it was probably just water from when she washed up the night before. I agreed and pushed it out of my mind.

“I woke up in the middle of the night because I heard Phil’s door open, so I quietly walk into the kitchen. Sure enough, this guy is peeing on the floor. I don’t know what to do so I shout at him and he just freaking runs past me back into his room. I wake my girlfriend up and tell her what I saw, and she assures me she’ll speak with him tomorrow while I’m at work.

“I get home from work that next day, and she says she’s dealt with it won’t be a problem again. Fine, whatever. She tells me not to tell him off and just to be normal with him, he’s probably having a hard time adjusting to living somewhere else. I see her point of view, and so we decide to all watch a movie together that evening.

“The evening rolls around, and we’re all in the living room together watching a movie. My girlfriend had to text me before I got home from work that she had made some food for her and Phil and they’ve already eaten so I should pick some food up for myself on the way home, so I did and got a pizza.

“Let me set the scene for you; I’m sitting in the middle of the couch with my girlfriend on one side, Phil on the other side, and my pizza box open on the table in front of us with a nice big slice hanging from my hand. I see it happen in slow motion – nothing in life has prepared me for this, so I literally do not move for I have no previous information coded into my brain for how to react.

“Phil just reaches over, grabs my slice of pizza straight from my hand, and starts eating it. I sit there for a few seconds, dumbfounded, flabbergasted, all of the ridiculous adjectives. Finally, I turn and ask him what the hell that was. He just sits there staring at me. I ask him again and raise my voice a bit, and he just gets off the couch and walks into his room. We don’t see him the rest of the evening.

“I know my girlfriend really thinks a lot of Phil because he’s kind of her family in a way and he really did give a lot back to her parents while they raised him. She tells me that she knows it was strange but that he just needs a bit more time to adjust to living with other people. I agree and don’t bring it up again.
“A few days go by, and things are quiet and uneventful when I’m told I have to go on a day training course the other side of the country. (England, don’t worry, a few hours on the train.) So I book a hotel for the night, and when the day comes round, I leave in good spirits, telling my girlfriend to text me if there are any problems.

“My training course went fine, I met up with some old colleagues and ended up drinking in the hotel bar with them. I retire to my hotel room quite late and decide to check Facebook before I sleep when I notice I have unread messages from my girlfriend. They were just a run down of how things were going. Apparently, her and Phil had some food together and watched some TV. Then, because it was a nice evening, they went on a long walk together. Okay, I’m not really a jealous guy so no big deal. I keep reading, and my heart drops.

“She goes on to say that after she had got into bed, she couldn’t sleep because it was lonely without me, so she went to the kitchen to make a snack. Phil was up getting a drink and apparently a chance meeting in the kitchen early in the morning was enough to betray the person you’ve been in a relationship with for three years. She said she invited him into bed with her. I was angry; I felt sick. I didn’t know what to do.

“I got the earliest train back that I could and stormed into the house furiously. I opened our bedroom door and sure enough found my girlfriend asleep actually cuddled up to Phil in bed with her.

“Anyway, it was super cute and to cut a long story short – our dog is allowed to sleep in our bed now. 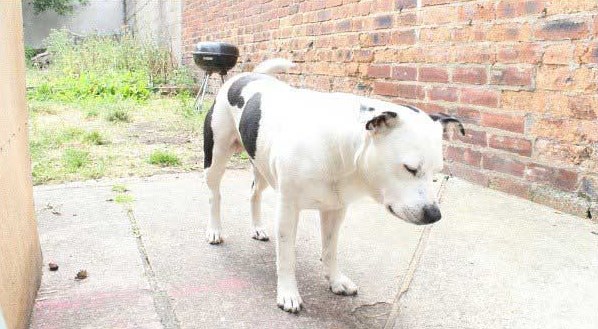