We received a phone call. My grandfather, 92 and grandmother, 85, were given months to live. Grandpa’s body is just slowly shutting down, and grandma has stage 4 cancer that has spread throughout her entire body. Grandpa is a WWII vet. He is tough as nails, but also as hilarious as they come. Their love story is the sweetest.

Out of all of the grandkids, my sister Angi has always had the strongest bond with Grandma and Grandpa, even after moving 15 hours away from them. We used to live across the street when we were little, and Angi used to sneak out of our house every night at 4 am and crawl in bed between them. She and grandpa talk almost every day on the phone. She even got a tattoo on her back of his name and an image of the division he was with in WWII.

When we realized that their health was failing quickly, they requested one thing….a trip to the beach with all 4 generations. My parents, my uncle, us, and our kids. We quickly made plans to drive from Missouri and Denver to Florida, where they live for one last beach party!

My sister, Angi is in a very serious relationship with an awesome guy named Toby whom we all love dearly. She mentioned amongst the scurrying to plan the trip that she was devastated if she and Toby ever get married, there obviously would be no way that her very favorite people, my grandparents would make it to see her down the aisle. Toby, being the thoughtful guy that he is decided to go ahead and put his plan into motion. He wouldn’t be able to make a wedding happen in time, but he certainly could do the next best thing…..plan a surprise engagement on the beach, so they could be there to witness it.

We coaxed Angi down to the beach by telling her that my daughter, her niece, would be practicing a song in front of everyone for a performance this summer. Angi, who is my daughter’s number one fan was front row and center to video her singing. It just so happened that it was Angi and Toby’s song. Shortly after the song began, Angi turned around to Toby on his knee to pop the question surrounded by 4 generations of Angi’s people, Grandma and Grandpa included. This was the sweetest moment that I can remember witnessing in quite some time. We are so grateful that Grandma and Grandpa were a part of it.” 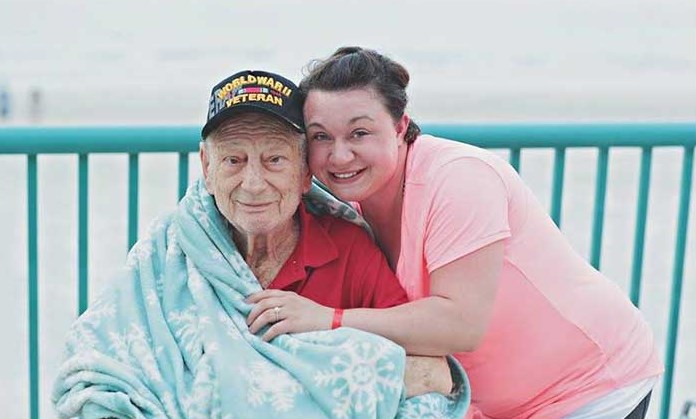 This family came together in the face of tragedy and created something beautiful that they will all remember forever – absolutely priceless.