We all hear about “random acts of kindness” and how much impact these simple but powerful gestures have in our everyday lives. But one teenager’s gift to a two-year-old he’d never even met before left the child’s mother humbled and speechless.

While ambling down the aisles of a Lafayette, Indiana Target store the week before Halloween, Megan Shufflebarger let her little girl expound on what her ideal list of birthday gifts would include. As the mother of three little ones, Megan could only afford one or two items on that long, long list, but Kinley, her daughter, was loudly proclaiming her wish list nonetheless to anyone who would listen.

Suddenly, a tall teenage boy came up to her daughter and asked Kinley which of the dolls she was speaking of was her absolute favorite. Kinley pointed out her “most wished for,” and the young man grabbed the doll in question, while telling the toddler to “stay over here.” 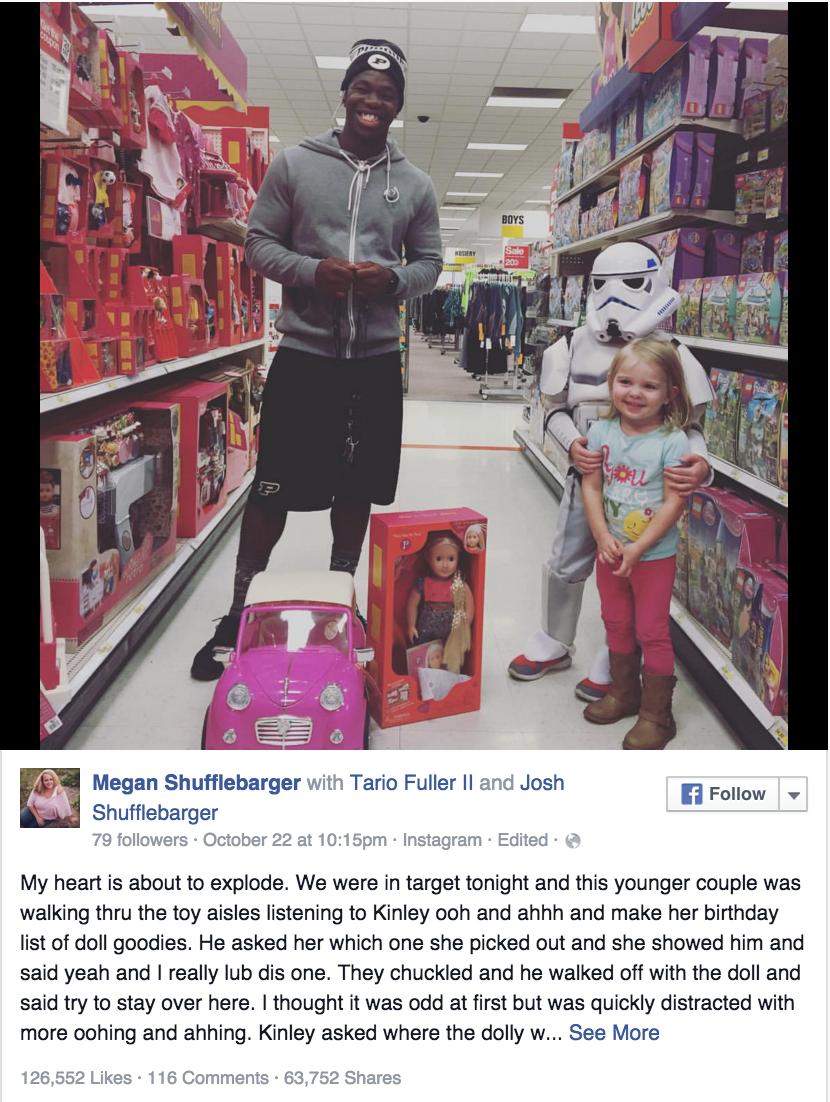 While Megan thought the interaction was a little bit odd, her young child was quickly back at her birthday list pronouncements, and Mrs. Shufflebarger put the moment out of her mind. Kinley, however, didn’t forget, and asked her mom what had happened to the coveted toy she’d pointed out to the teen who had walked off with it.

Suddenly, out of nowhere, the young man returned. In his hand was a bag and inside that bag was a paid receipt, which he handed to Megan. Then from behind his back, the boy gave little Kinley her beloved doll, while wishing her a very happy birthday.

Mom was left gobsmacked, but thanked the teenager as he walked off. Needless to say, she wanted to be able to thank the young man for his kindness from the bottom of her heart in more depth. Hoping to find out his identity, Megan shared her story on Facebook, and sure enough, she quickly found out who her daughter’s benefactor had been. It was a freshman athlete at Purdue by the name of Tario Fuller II.

Once she was able to connect with Tario and thank him, Megan felt better. She also knew that just sharing this simple but lovely story would open the door to many more such moments for others.

“This one act of kindness has likely generated thousands of smiles,” Megan said of the young man’s generous and sweet gesture.