There’s nothing more heartwarming than the love between siblings, as this recent viral story proves.

Teens often get a bad rap. Many consider the younger generation to be self-involved and only interested in helping themselves. When it comes to a young woman named Stiles, that is decidedly not the case.

It all began when Stiles’ mom, writer Candice Curry, had something come up that prevented anyone else from being able to pick up Candice’s youngest child from school in time. She turned to Stiles for help, and the high school student more than delivered.

Candice shared her story on Facebook, where it was soon picked up by Love What Matters. From there, it quickly spread across the internet. Many people have been moved by this heartwarming story of a sister taking care of her brother in such a responsible way.

Scroll through the photos below to learn more! 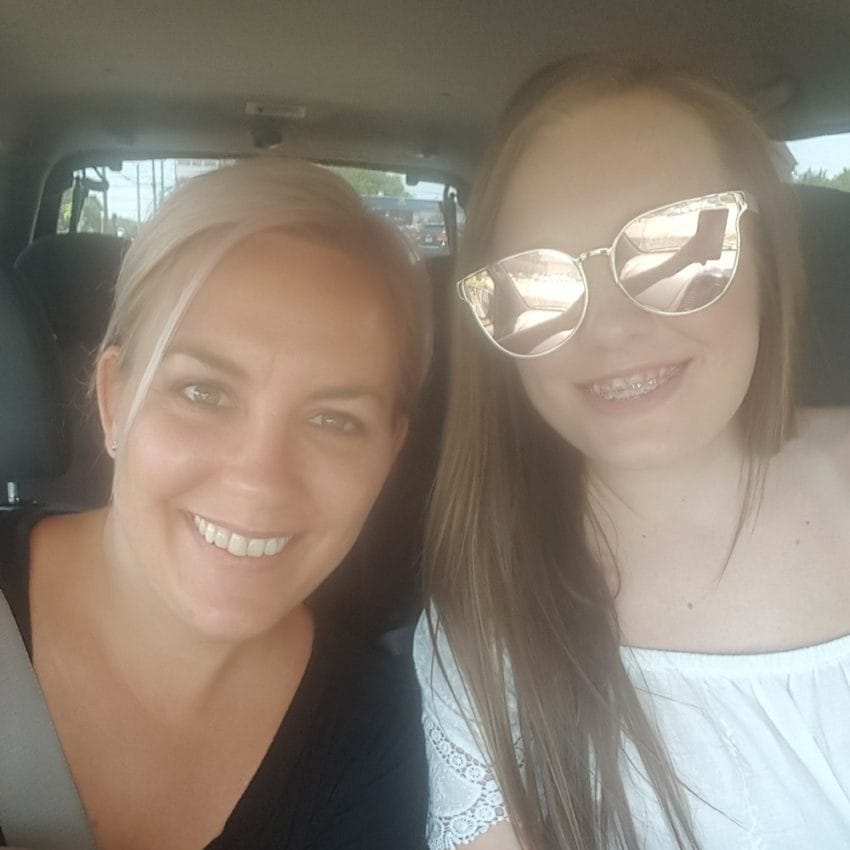 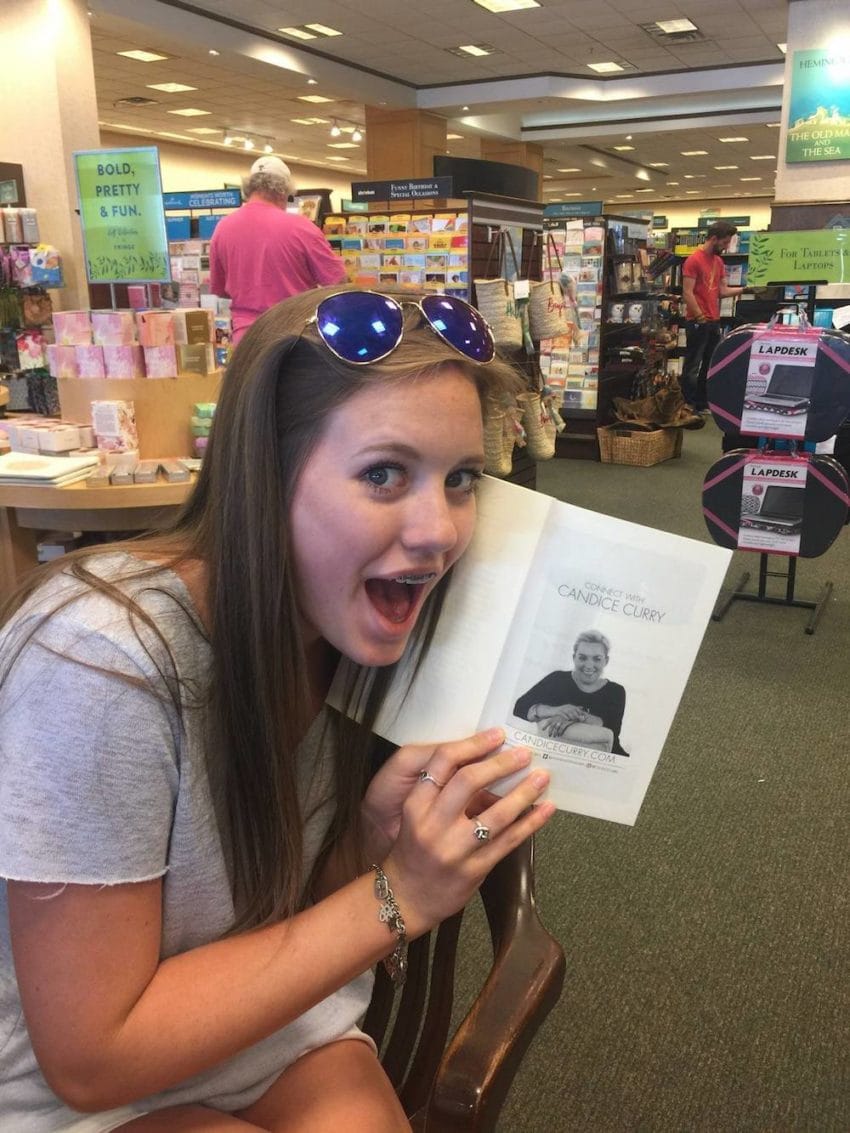 Candice’s story began back in May 2017, when she encountered a “family emergency type situation.”

Luckily, Stiles was more than willing to help her mom out.

On May 25, 2017, Candice shared a Snapchat screenshot of her daughter sitting in her high school classroom, with the little boy blissfully passed out and lying on her chest. A caption along the bottom reads “Bring your kid to school.” 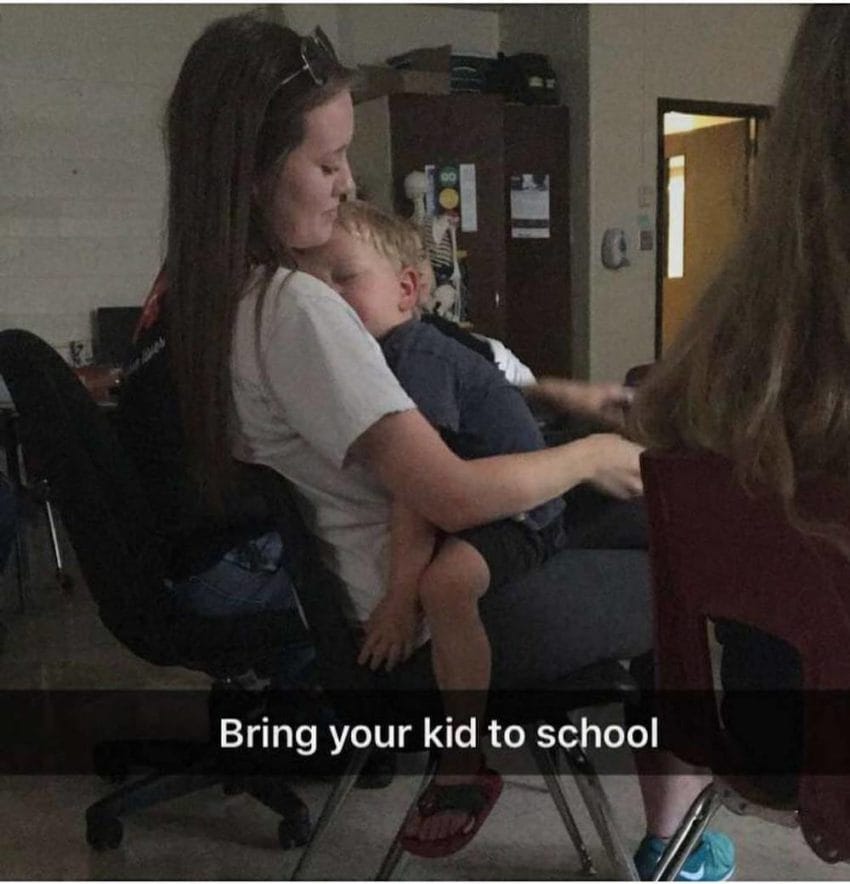 In the post, Candice explained how this unusual sight came to be.

We had a family emergency type situation today that required our teenager to leave school early and pick up her little brother from his school. I thought she took him home until I saw her Snapchat. 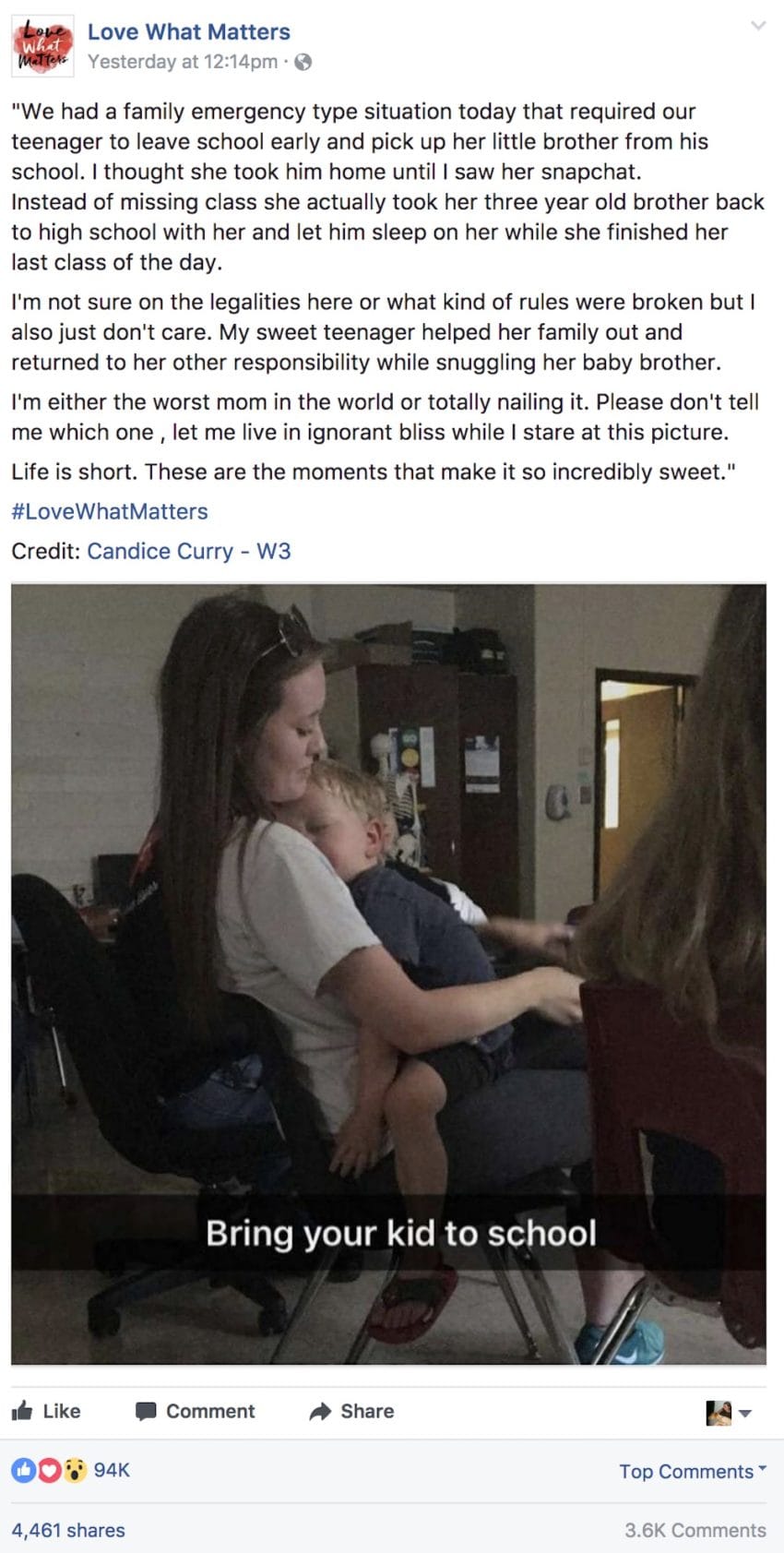 Instead of missing class she actually took her three-year-old brother back to high school with her and let him sleep on her while she finished her last class of the day.

I’m not sure on the legalities here or what kind of rules were broken, but I also just don’t care.

My sweet teenager helped her family out and returned to her other responsibility while snuggling her baby brother. 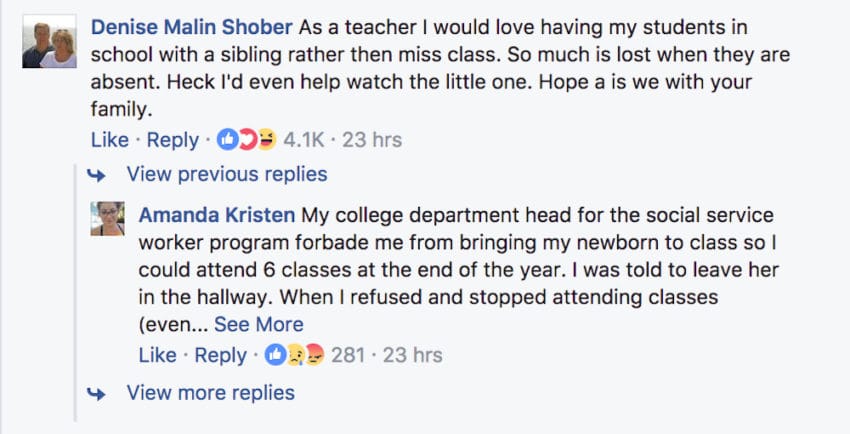 I’m either the worst mom in the world or totally nailing it.

Please don’t tell me which one, let me live in ignorant bliss while I stare at this picture.

Life is short. These are the moments that make it so incredibly sweet.

Candice’s post was picked up and shared by Love What Matters several months later, on August 13, 2017, where it quickly went viral. Since it was posted, the sweet photo and story has been shared over 4,600 times and has gotten over 3,700 comments.

“This was a one-time thing. We don’t usually ask her to pick him up from school, but we were stuck in a family emergency situation,” Candice tells LittleThings. “My daughter asked permission from her teacher to bring him back to class, and the teacher had no problem with it. She goes to a great school that understands the importance of family and education.”

There’s so much to love about this story.

From the teen who took care of her brother and helped out her mom without a second’s hesitation to the teacher who understood the situation and made an exception, it’s one of the most heartwarming things I’ve heard in quite a while.