Home
Entertainment
This Is Something You Probably Never Realized About The Titanic. This Is Tear-jerking. 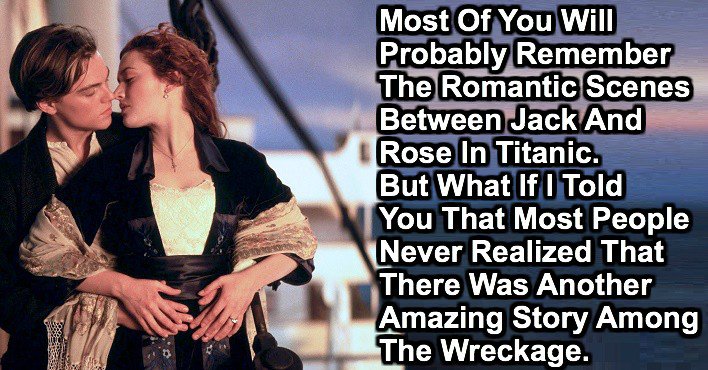 In Titanic, the scene showing an elderly couple embracing while the ship sunk was based on a real couple.

They were the owners of Macy’s. Their names are Isidor and Ida Straus and their story is quite touching. Raised in the south during the Civil War, Isidor would go on to New York where he would jointly found a store that sold crockery and glassware with his brother.

After becoming extremely wealthy, Isidor married Rosalie Ida Blun, and by all accounts the two were inseparable. When apart they would write letters every single day and tried to always stay in each other’s company. The Straus’ boarded the titanic on their return trip from Germany to the United States when, on April 14, 1912, the ship struck an iceberg.

Once it was clear the Titanic was sinking, Ida refused to leave Isidor and would not get into a lifeboat without him. Although Isidor was offered a seat in a lifeboat to accompany Ida, he refused seating while there were still women and children aboard and refused to be made an exception. According to friend and Titanic survivor Colonel Archibald Gracie IV, upon seeing that Ida was refusing to leave her husband, offered to ask a deck officer if Isidor and Ida would both enter a lifeboat together. Isidor was reported to have told Colonel Gracie in a firm tone: “I will not go before the other men.” Ida insisted her newly hired English maid, Ellen Bird, get into life boat #8. She gave Ellen her fur coat stating she would not be needing it. Ida is reported to have said, “I will not be separated from my husband. As we have lived, so will we die, together.” Isidor and Ida were last seen on deck arm in arm. Eyewitnesses described the scene as a “most remarkable exhibition of love and devotion.”

The couple then proceeded to the back of the panicking crowd and were last seen sitting together in chairs on the deck of the ship, calmly holding hands until a massive wave washed them into the sea. Today a memorial for Ida and Isidor can be seen on the main floor of Macy’s Department Store in Manhattan.