Home
Humanity
After 30 Years Of Living In The United States, Father Of Two Gets Deported To Mexico

Jorge Garcia, a Detroit man, had lived in the US for nearly 30 years before he was deported back to Mexico. Garcia came to the US with his family when he was 10 years old. According to his family, he has no criminal record, pays taxes and has long sought legal status.  The 39-year-old landscaper was deported and can’t return to the US for a decade. 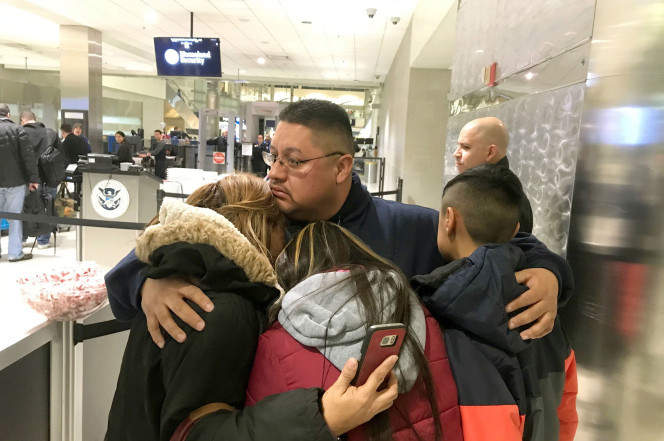 Garcia faced an order of removal from immigration courts since 2009. He was granted stays of removal under former President Barack Obama’s administration.

In November, Garcia learned that he’d been scheduled to be deported as part of an immigration crackdown by President Donald Trump’s administration. Rep. Debbie Dingell (D-Michigan) pushed back the deportation date to allow Garcia to spend the holidays with his wife and two children, who are all US citizens.

“We did not want to put up a Christmas tree because it was way too sad to even get to that point,” said his wife, Cindy Garcia. “It was rough because we knew he was going to leave eventually. All we could do is make memories.”

“Rather than wait to see what reforms are made, immigration officials came into work on a national holiday to take Jorge away from his family,” said Michigan United, a group that advocates for immigrant rights and other issues.

The Deferred Action for Childhood Arrivals program allows young immigrants living in the country illegally if they were brought here as children to work and study in the US. Unfortunately, Jorge Garcia is too old to qualify.

“I got to leave my family behind, knowing that they’re probably going to have a hard time adjusting,” Garcia said. “Me not being there for them for who knows how long. It’s just hard.”

A spokesman for US Immigration and Customs Enforcement, Khaalid Walls, said that the federal government was justified in deporting Garcia.

“All of those in violation of the immigration laws may be subject to immigration arrest, detention and, if found removable by final order, removal from the United States,” Walls said in a statement.