The truth about extreme adventure sports is that in order to stay fresh and interesting, people have to come up with even crazier and crazier ideas. But this might be going to far.

A group of climbers, perhaps tired of simply scaling impossible structures, decided they were going to do a construction project in mid-air… but that’s not even the strangest part. What they end up doing is totally insane.

Under the cover of night, these intrepid extreme sports enthusiasts began their mission. 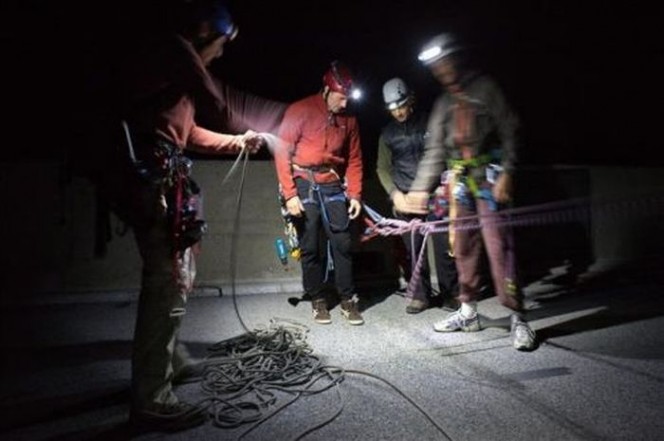 First things first, they needed to organize all of their gear. 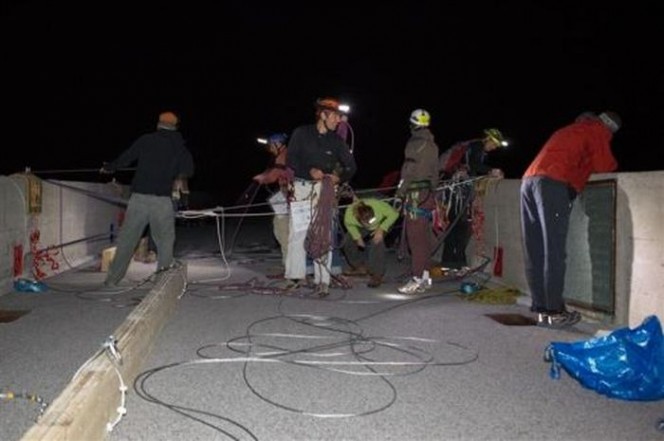 Next, they had to wheel in their supplies. They worked together using a rope system to lower all of the items needed for construction. Then they started setting up the water heaters. Wait, what? Communication is key on a dangerous project like this. Every person involved in its construction was a highly experienced climber. Safety was their number one priority. The sun began to rise. The team had to hurry. The increase in natural light made it easier to work. The final board for the foundation made its way down. Look at how quickly it is taking shape! Onlookers were baffled as they watched the team lower some fireproof padding and tarps. Then they started setting up the last part. It was beginning to take shape, but what was it?! Holy cow! That really gives you some perspective. It was a hot tub! And everything was finally in place to use it. The adventurers began to descend. Everything was downhill from there…literally! It was time to get this party started! Here’s a bird’s eye view of the bold bathers! “Hey guys, is there room for one more?” The water was nice and hot, soothing to the touch! They would have a long climb back up ahead of them, but they weren’t worrying about that now. Time to celebrate their adventure with a little bit of birthday pie! This is one birthday these extreme hot-tubbing fans won’t soon forget. I bet the people passing by were extremely jealous. … but then again, maybe not. Yikes! Eventually, every party has to end, and they had to dump the water and head back up. I know you only live once, but I want that one life to last as long as possible! I’m glad there are some adventurous souls out there doing this stuff so I don’t have to. I think I’ll stick to land hot-tubbing, thank you very much!