Late one evening, Lacey Dunkin received the call. “She to me she had a foster-care emergency placement: four sisters ages 5,2-year-old twins, and 1. I was barely awake, but I said yes.” Dunkin said.

As Dunkin prepared breakfast the next morning, Sophia, the eldest daughter said something beautiful.”I was making her breakfast, and she asked me if I had any daughters and if she could be my daughter, which broke my heart. She asked what she could call me, and I told her, ’My name is Lacey, and you can call me whatever you want to call me. ’By the time I found her school and dropped her off, she was introducing me as her mom.”

Dunkin later learned there was another sibling, Lea, who was born one night earlier. After nine months, the girls returned to be with their birth mother. Dunkin noted.”I tried to keep the faith that they would end up where they were supposed to, and in my heart, that was here.”

A month later, Dunkin received another call, this time from the birth mother.”She called and asked if I would take all five. I immediately said yes.” Dunkin said.

In July of 2013, the adoption was completed.”They asked me if I was sure they were staying. I reassured them, You’re adopted. You’re home forever.’ “One more surprise followed a girl, Cecily born that September from the birth mother. Cecily to was adopted by Dunkin.

“I want people to know that foster children are not bad, they’re not broken. Children are resilient, and want and need a loving home.” Dunkin said. 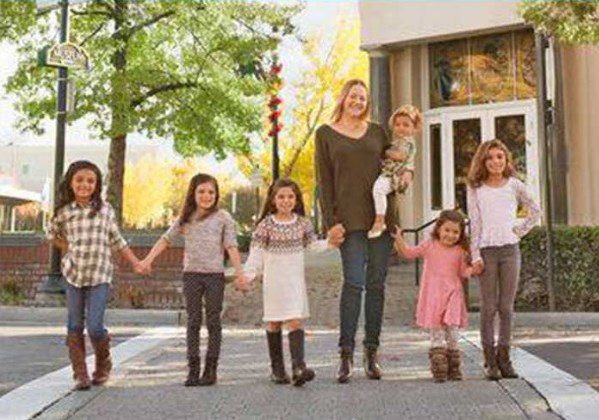