Home
Humanity
Restaurant Owners Discover Someone Is Continually Going Through Their Trash, So They Leave This Note…

When a Little Caesar’s realized a homeless person was digging through their trash for food, rather than ignore it or get angry, they decided to show this person some love and write them a note.

Rachel Nistler tweeted a photo of the sign to make sure that this Little Caesars restaurant gets recognized for their act of kindness. She said she wants the restaurant to get all the attention rather than her tweet because it truly impressed her.

The note says, “To the person going through our trash for their next meal, you’re a human being and worth more than a meal from the dumpster. Please come in during operating hours for a couple of slices of hot pizza and a cup of water at no charge. No questions asked.”

This Little Caesars franchise is owned by Mike Stevens and his wife Jenny, who opened up the business in 2015. They are not strangers to helping the homeless either.

They have given free pizzas to the local Salvation Army, New Life Center, and Moorhead’s Dorothy Day House. Mike said they keep their pizzas fresh, so if the pizza is out for 30 minutes and did not sell, the employees put them in the freezer for the local homeless shelters to pick up so they don’t go to waste.

In addition, the restaurant leaves a change collection box on the front counter so that customers can leave their change to buy pizza for the homeless in the local shelters. 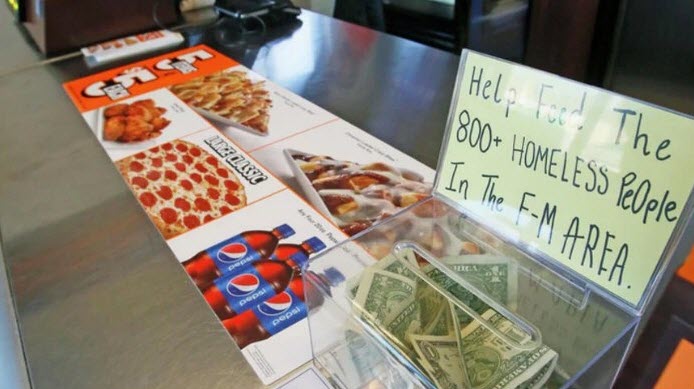 The couple’s intentions are to help the lives of local people that don’t have a means to provide for themselves.

The customers love what they are doing and so do we!