A flight attendant garnered praise for the way she responded to a Muslim passenger who refused to sit next to a woman reading a bible. 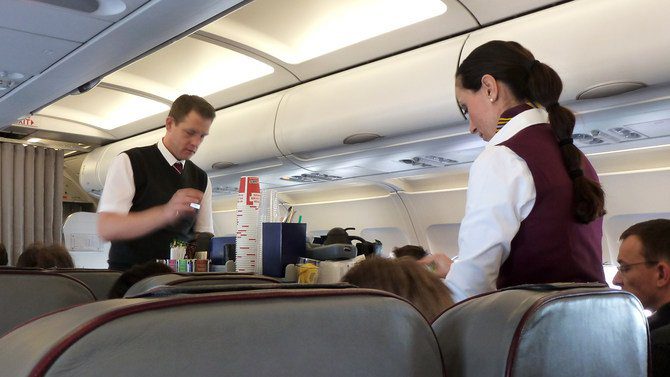 Sherrell D. Rusty Jones shared the story on Facebook, explaining that the Muslim man was upset that he had to sit next to an elderly woman reading a bible on his flight. He called over a flight attendant and demanded to be moved.

“I cannot sit here next to this infidel,” the man said.

“Let me see if I can find another seat,” the flight attendant responded.

The attendant returned soon after and said that while there was nothing open in the economy, she was going to check if there were seats left in first class.

“The captain has confirmed that there are no more seats in economy,

but there is one in first class. It is our company policy to never move a person from economy to first class,” the attendant stated, “but being that it would be some sort of scandal to force a person to sit next to an UNPLEASANT person, the captain agreed to make the switch to first class.”

Before the Muslim man was able to respond, the flight attendant turned towards the elderly woman.

“Therefore, madam, if you would so kindly retrieve your personal items,

we would like to move you to the comfort of first class as the captain doesn’t want you to sit next to an unpleasant person,” she said.

The story quickly went viral, with many readers applauding the flight attendant for standing up for the woman.

“My thanks to that flight attendant! It could very easily have gone a different way! I wonder how many flight attendants would have handled it that nicely for the lady who was courageous enough to have her Bible out!” one Qpolitical reader commented on the site’s Facebook page.

“ If the man spoke of the woman as an infidel, he should have been taken off the plane as referring to the sweet lady with a Bible is a demonstration of hostility. By the response of applause from other passengers, I would guess there was a plane full of “infidels”. The Muslim man was obviously not integrating into society here very well. I think it was wrong for the airline staff not to remove this rude man,” another added.

“I would have put away my Bible so that I would not offend someone that did not believe as I do. I was in a public, confined, place, and I don’t believe God would want me to offend anyone,” another wrote.